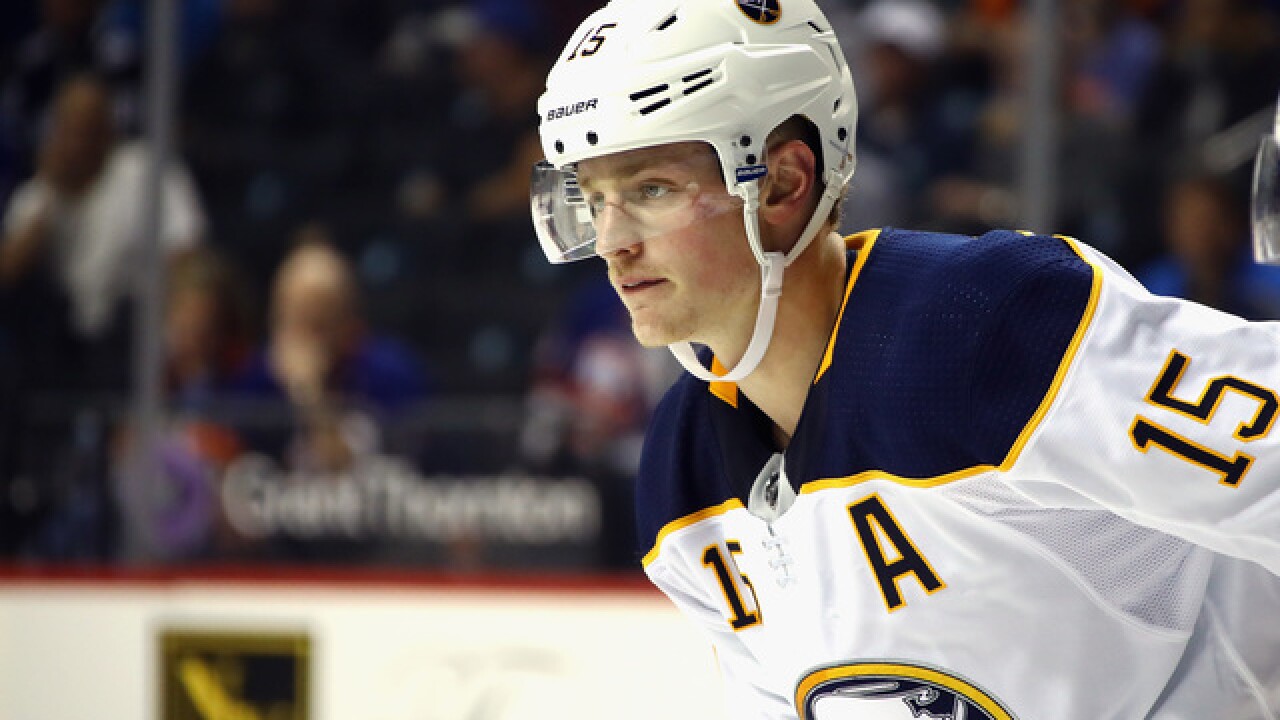 Copyright 2017 Scripps Media, Inc. All rights reserved. This material may not be published, broadcast, rewritten, or redistributed.
Bruce Bennett
<p>NEW YORK, NY - OCTOBER 07: Jack Eichel #15 of the Buffalo Sabres skates against the New York Islanders at the Barclays Center on October 7, 2017 in the Brooklyn borough of New York City. (Photo by Bruce Bennett/Getty Images)</p>

Jack Eichel had five assists and five different players had multi-point games as the league-worst Buffalo Sabres knocked off the league-best Nashville Predators 7-4.

Five observations from the win:

It was a historic night for Jack Eichel. With his five assists against the Predators, Eichel is the first player to have a five-point night for the Sabres since Thomas Vanek did it in 2013. Eichel's five helpers also tie a franchise single-game record.

After his offensive explosion, Eichel now has 62 points in 63 games this season. His previous career best was last season when he tallied 57 points.

Not to be outdone, Sam Reinhart had arguably his best game of the season, recording his second career hat-trick. With his three goals, Reinhart now has 23 goals and 47 points on the season. When you consider his slow start, that's not a bad campaign.

Reinhart now has 47 points this season, matching his total (career best) set last season. Not bad when you consider his disastrous start #Sabres

Kyle Okposo also had two goals, Ryan O'Reilly had a goal and two assists and Rasmus Ristolainen had three assists in the Sabres seven-goal outing.

When the lowest scoring team in the NHL posts seven goals in a game you know that something is up. Buffalo certainly took advantage of their five-minute man advantage in the second period, scoring three times. But Buffalo also got pucks to the net early and often, making it a difficult night for Vezina candidate Pekka Rinne.

Very dangerous hit by Scott Hartnell. Antipin had to be taken off the ice on a stretcher. Video courtesy MSG. pic.twitter.com/pZJJGCuHdj

Sabres fans will say Scott Hartnell deserves a 10-game suspension. Predators fans will say there is nothing Hartnell could do because Victor Antipin turned at the last second. Allow me to be the voice of reason.

It was a dirty, unnecessary hit and Hartnell should be suspended. But I don't think he deserves anything more than five games.Yes, Antipin turned, but from the angles shown on the broadcast, it appeared Hartnell had time to back off or apply less pressure. At this point debating over the punishment will get us nowhere. Hartnell will likely be contacted by the league in the next few days and then we'll find out if he receives further punishment.

All that said, hopefully Victor Antipin has a speedy recovery. It was a scary hit and anytime a player has to be taken off the ice on a stretcher, you fear the worst.

Casey Mittelstadt is still a point-per-game player. In his second NHL game, Mittelstadt picked up another assist on Kyle Okposo's first goal of the evening. Although he'll get credit for the secondary assist, Evan Rodrigues deserves the praise, he's the one who made the goal happen with an unbelievable individual effort.