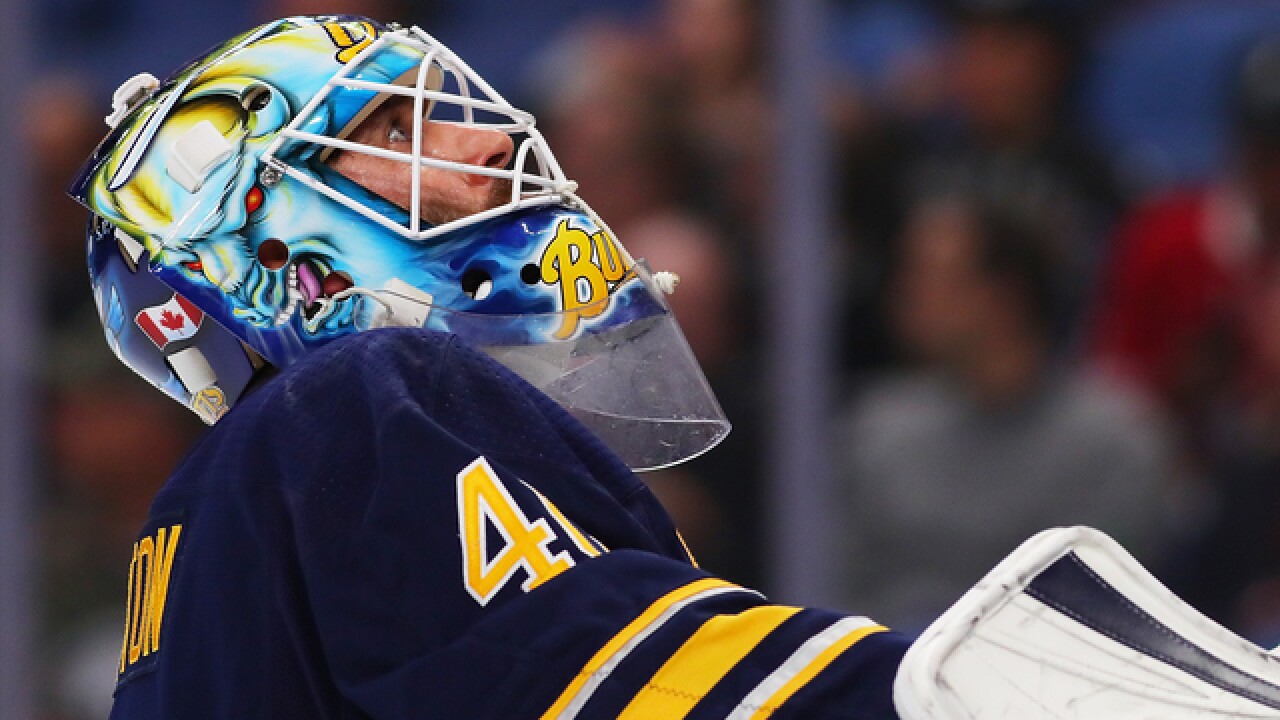 Copyright 2018 Scripps Media, Inc. All rights reserved. This material may not be published, broadcast, rewritten, or redistributed.
Kevin Hoffman
<p>BUFFALO, NY - OCTOBER 25: Carter Hutton #40 of the Buffalo Sabres during the game against the Montreal Canadiens at the KeyBank Center on October 25, 2018 in Buffalo, New York. (Photo by Kevin Hoffman/Getty Images)</p>

Despite a disastrous second period, the Buffalo Sabres won their third consecutive game, knocking off the best team in the Eastern Conference, the Tampa Bay Lightning, 2-1. Jeff Skinner and Kyle Okposo scored for the Sabres, who improve to 10-6-2 with the win.

In their most challenging matchup yet this season the Sabres prevailed, earning their tenth win of the season and sixth win on home ice. Carter Hutton was exceptional, stopping 29 of the 30 shots he faced.

"Some nights you're going to have to sort of grind one out when maybe you don't deserve to win," Jeff Skinner said. "But for us, I think Hutts [Hutton] played a pretty big game for us and got us a win. Sometimes you need a goalie to steal you one and I think he that tonight for us."

Kyle Okposo said it best after the game. Good teams find ways to win. Chances are, the Sabres wouldn't have prevailed in years past. It's evident they are trending in the right direction.

Love this answer from Carter Hutton. He was asked if he feels ever starts to feel unbeatable when he's playing like he did against Tampa Bay #Sabres @WKBW pic.twitter.com/54wRSWQANI

Carter Hutton had one of his best games of the season against the high-powered Tampa Bay offense. Hutton bailed his team out time and time again, turning away plenty of dangerous chances from the Lightning.

More from the man of the hour, who turned away 29 of the 30 shots he faced #Sabres @WKBW pic.twitter.com/OMZIdmp9Cx

Despite not making any big highlight reel saves as he has in other games this season, Hutton was very controlled in the blue paint and put himself in good positions to stop Tampa Bay chances without giving up big rebounds. If it weren't for his performance on Tuesday, the outcome against the Lightning would have been very different. For my money, Hutton was the best player on the ice.

I hate the "on pace" stats because there are so many different factors that go into what happens throughout an 82 game season. But in the case of Jeff Skinner, they are too fun to ignore. With his 13th goal of the season, Skinner is now on pace to score 59 goals this season.

Will he actually find the back of the net 59 times?

But use his 13 goals in 18 games as a reminder at just how awesome the 26-year-old winger has been for the blue and gold. With every goal, his next contract gets richer. But at this point, there is no question he'll be a priority for Jason Botterill and the Sabres moving forward.

To say the Sabres were lucky to escape the second period with a 2-1 lead would be a massive understatement. After Kyle Okposo scored his fifth goal of the season, the Sabres recorded only one shot in the final 14 minutes of the period.

Tampa Bay controlled play at both ends, tallying 14 shots in the middle frame compared to the Sabres two. If it weren't for missed opportunities and a few nice saves from Carter Hutton, the Sabres would have been playing from behind heading into the third period.

If Buffalo is going to turn a corner, they can't completely fall asleep for 20 minutes as they did on Tuesday. They will, of course, have periods where they struggle. But getting outshot 14-2 is unacceptable, especially against a team as dangerous as the Lightning.

This is crazy -- with their win against Tampa Bay, the Sabres earned their sixth win at KeyBank Center this season. Last year, it took the Sabres until January 11th to win their sixth game at home.

Before the season, almost every player mentioned at one point that the Sabres needed to be more dominant in their own building. If you're going to talk the talk you better walk the walk and up to this point, they have.