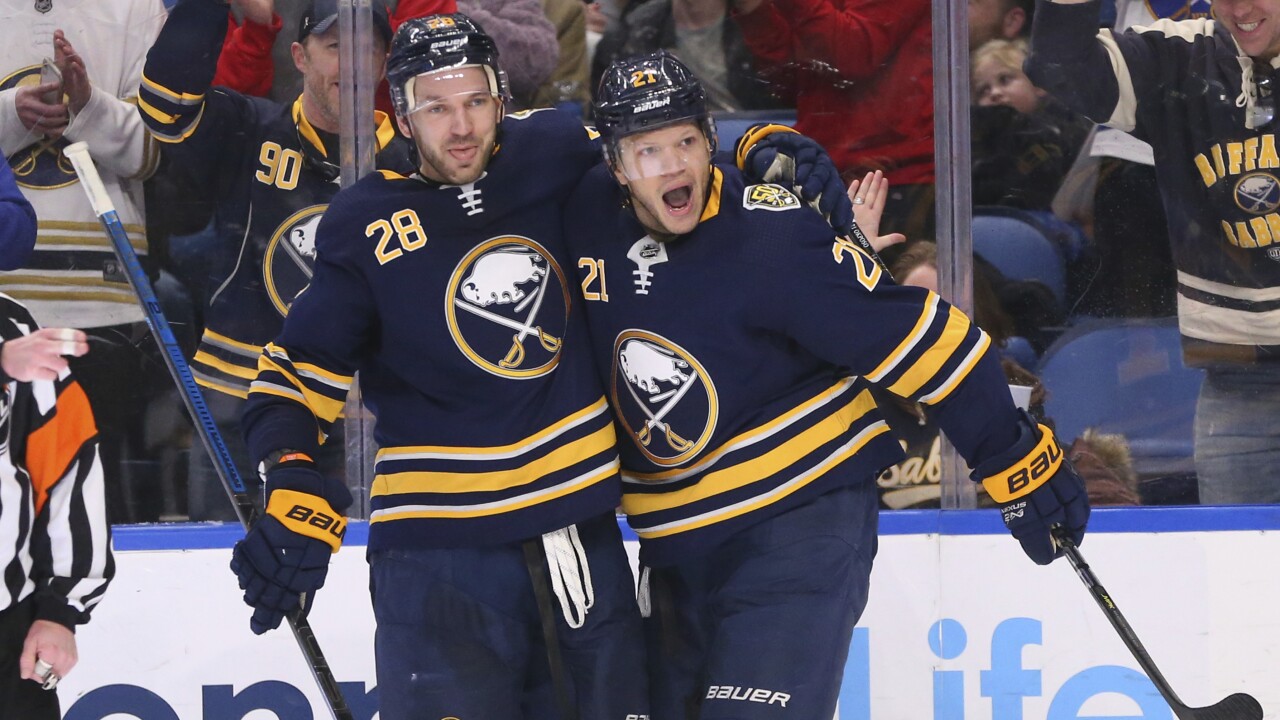 BUFFALO, N.Y. [WKBW] — Kyle Okposo scored the first goal of the game and the last goal of the game, as the Sabres won their second straight game, knocking off the Winnipeg Jets 2-1. Jonas Johansson earned his first NHL win, stopping 25 of the 26 shots he faced.

His best start yet

Jonas Johansson had a very strong outing Sunday afternoon, stopping 25 of the 26 shots he faced. It was certainly his best game as a Sabre and one of the biggest reasons why they escaped with two points.

Johansson's best save came in the second period, stoning Jansen Harkins from point-blank. For a guy who hasn't played in two weeks, it was an even more impressive game for the Sabres rookie. Aside from the Senators game on Tuesday, the Sabres have been very fortunate with some solid goaltending since Linus Ullmark was sidelined last month.

Kyle Okposo had his first multi-goal game since 2018 on Sunday, continuing his recent stretch of impressive games. Okposo has now tallied at least a point in five straight games and has eight points in his last 10 games played.

Yes, I know, Okposo's contract is bad and he's overpaid but try and shove that to the side when evaluating his recent play. He's a valuable player and is likely going to be here for several more years. If he can become a consistent 15-20 goal player and provide some secondary scoring for the Sabres for the next few years, the Sabres will be happy to have him, regardless of his cap hit.

Speaking of Okposo, once again his line with Zemgus Girgensons and Johan Larsson had a strong game, producing several quality scoring chances and generating two goals for the home team. As a trio, the combination has been a pleasant surprise and has become one of the Sabres' most consistent lines at both ends of the ice.

There is no denying the Sabres roster needs its fair share of changes but it would be a good idea keeping this line together into next season. That would require the Sabres signing both Larsson and Girgensons to new deals, which may be far-fetched. But in a fourth-line role, each of these players brings something to the table that every good team needs.

Now the focus for GM Jason Botterill shifts to the NHL Trade Deadline Monday at 3:00 p.m. The Sabres could sell, they could buy, or perhaps a combination of both. Be forewarned Sabres fans, every year it seems like the deadline fails to live up to expectations. So if you're hoping for the Sabres to pull off a blockbuster, it might be a good idea to temper your expectations.

It won’t be easy, but it’s not impossible either. After their win on Sunday, the Sabres are now six points back of Toronto with a game in hand for third place in the Atlantic Division. Florida, who sits between the Sabres and Maple Leafs, is four points up in Buffalo. Buckle up, the next 20 games are going to be a lot of fun.