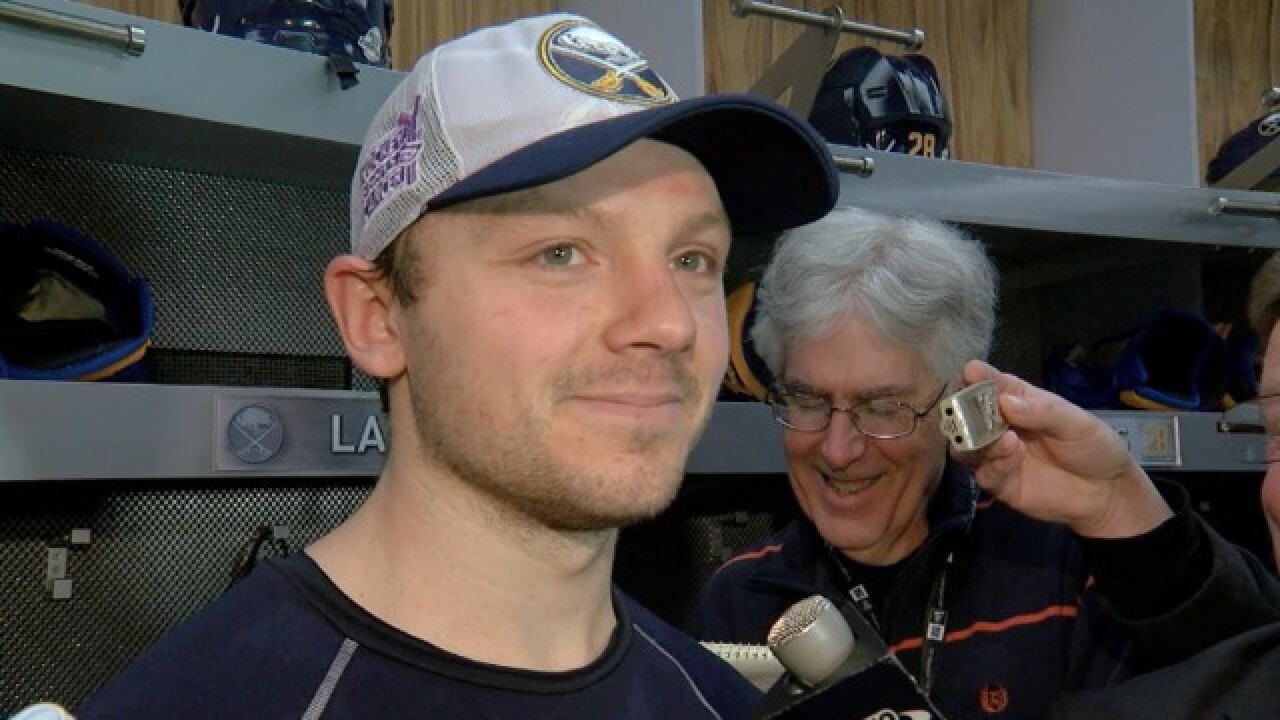 Copyright 2018 Scripps Media, Inc. All rights reserved. This material may not be published, broadcast, rewritten, or redistributed.
<p>Reinhart says nothing has changed despite scoring spike </p>

The better the Buffalo Sabres look, the better the Sabres play....kind of. For the first time in nearly a month [Jan 11] the Sabres won a game on home ice, snapping their four-game losing streak with a 4-3 win over the New York Islanders. Jack Eichel, Evan Rodrigues, Ryan O'Reilly and Sam Reinhart scored for the Sabres while Robin Lehner finished with 26 saves for the 1,000th home win in franchise history.

No lead is safe

You know what they say -- a three-goal lead is the most dangerous lead in hockey. Well, nobody really says that but with the 2017-2018 Sabres, is any lead really ever safe?

After John Tavares scored the Islanders first goal of the night I'd imagine plenty of fans thought to themselves "oh no, here we go again." Although it wasn't pretty, the Sabres squeaked out a win, something they haven't done very often this year. Take them how you can get, I guess.

At least they were efficient

Two shots, two goals -- Can't get much more efficient than that. In the first period, the Sabres didn't register a shot until about the 10-minute mark. Luckily for them, Jack Eichel's shot beat former Sabres goaltender Jaroslav Halak to give Buffalo a 1-0 lead. Moments later the Sabres got a rare lucky bounce and Evan Rodrigues capitalized, getting just enough on his shot to double the Sabres lead.

Jack Eichel said the #Sabres need to win some games to get fans back in the arena. Added he doesn't blame fans for staying home with their recent struggles @WKBW pic.twitter.com/jHZlvQQ2no

At the conclusion of the first period, the score sheet said the Sabres finished with four shots. Maybe I'm just a skeptic but I certainly don't remember four shots [realistically they probably had three]. Either way, it didn't matter as the Sabres gave themselves a rare early lead.

Trending in the right direction

Sam Reinhart has been no stranger to criticism this season and rightfully so. The former second overall pick has only 26 points in 53 games but he's trending in the right direction.

With his goal and two assists on Thursday, Reinhart now has 13 points in the Sabres last 10 games. With 29 games left on the schedule, Reinhart will be an interesting player to watch. After the season he's set to become a restricted free agent, leaving the Sabres with a big decision to make about their former top prospect. If he keeps up his recent play the Sabres will surely be glad to have him back. If he reverts back to first half of the season Reinhart that might not be the case.

It's funny how quickly things can change. Despite their recent struggles in the win-loss column, the Sabres have maintained a very effective power play.

In the second period, O'Reilly redirected a Rasmus Ristolainen shot to give the Sabres a 3-0 lead and their 10th power-play goal in their last 12 games. During that span the Sabres are 13-39 [33%], which is pretty incredible. It's obvious that the Sabres recent power play prowess hasn't mattered much when it comes to final results but it has certainly been one of the bright spots since the Winter Classic.

Maybe, just maybe, the Sabres will switch to their Winter Classic jerseys full-time OR implement a new set featuring royal blue, rather than the navy blue they currently use. As far as I'm concerned, the Sabres current uniform combo is *one of* the best in the league. If they make the switch to royal blue they might have the absolute best. You'd be hard-pressed to find a sweater better than what the Sabres wore on Thursday. And while we're at it, let the home team wear white and the road team wear dark. Thanks, NHL.

The #Sabres have never lost in regulation when wearing their Winter Classic jerseys.