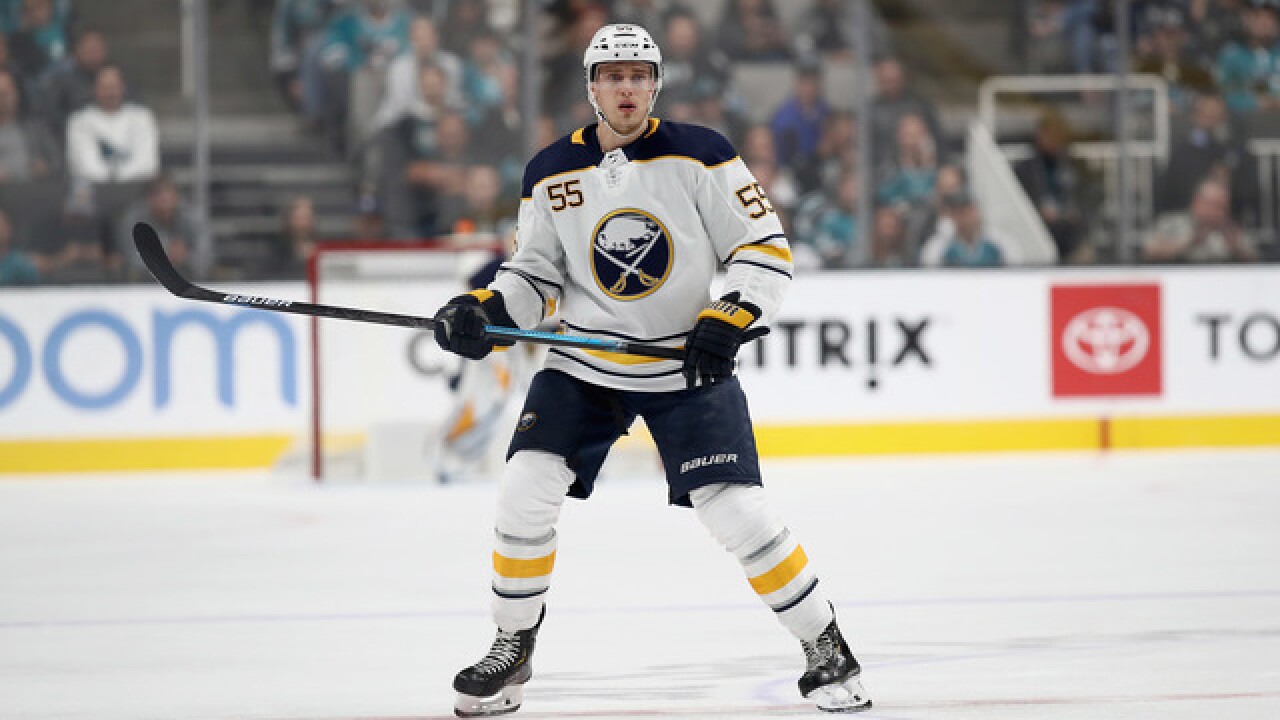 Copyright 2018 Scripps Media, Inc. All rights reserved. This material may not be published, broadcast, rewritten, or redistributed.
Ezra Shaw
<p>SAN JOSE, CA - OCTOBER 18: Rasmus Ristolainen #55 of the Buffalo Sabres in action against the San Jose Sharks at SAP Center on October 18, 2018 in San Jose, California. (Photo by Ezra Shaw/Getty Images)</p>

For the first time this season, the Buffalo Sabres won a game that went into overtime, topping the Montreal Canadiens 6-5. Rasmus Ristolainen fired a slap shot past Carey Price to give the Sabres their eighth win of the season [8-6-2]. Vladimir Sobotka and Jeff Skinner both scored twice for the Sabres, while Conor Sheary also found the back of the net.

Remember the scene in "Dumb and Dumber" when Harry tells Lloyd that he has totally redeemed himself? That was basically Sabres fans to Rasmus Ristolainen in overtime. After a game when the Sabres defender struggled, Ristolainen propelled the Sabres to their first win in extra time this season.

Seconds before the goal, Ristolainen turned the puck over behind the Sabres net, allowing an odd-man rush for the Canadiens. Luckily for him and his team, Montreal's shot went high and wide and went right to Ristolainen, who was waiting at the blue line.  At the end of the day only one thing matters -- the Sabres won and Ristolainen deserves credit for capitalizing on his opportunity.

Outstanding celebration by Ristolainen after his game-winning bomb pic.twitter.com/P0uZsXPSzk

Linus Ullmark hadn't lost a game in regulation in his first four starts this season. Despite not getting handed a loss, Ullmark had his worst game of the season and arguably the sloppiest game of the year  from a Sabres goaltender. Don't get me wrong -- Ullmark made some solid saves, especially in the first few minutes of the game. But I'd have to imagine he would want at least two or three of the goals he allowed back.

Of the five he allowed in the first 40 minutes of the game, none was worse than the second Montreal goal when Matthew Peca slid a puck off Ullmark's pad from behind the net and in. Minutes later the Habs scored another goal Ullmark should've had when he allowed a shot from the point through his pads, allowing an easy tap-in for Andrew Shaw.

Despite his struggles Thursday, the Sabres can't abandon their young goaltender for an extended period of time. Up to this point, Ullmark has had more impressive performances than bad outings. How he responds after a rough night will be very important for both himself and his team.

If you're a fan of bad defense and goals galore than Thursday's matchup between the Sabres and Canadiens would be right up your alley. Bad decisions, turnovers and sloppy rebounds became the theme of the high scoring affair in Montreal. Both goaltenders allowed some soft goals and the dueling teams each made their fair share of head-scratching plays. It was an incredibly sloppy game for both teams but at least it was entertaining!

On countless occasions, I've said the Sabres biggest concern in their first five weeks of the season has been their lack of secondary scoring. That clearly wasn't the case in their second matchup against Montreal this season. Vladimir Sobotka tripled his goal count on the season, scoring two goals in the first period. Conor Sheary also scored his fifth goal of the year on a pretty pass from Casey Mittelstadt. On most nights, three goals from the second and third lines should be enough to win a game. Especially when your top line also finds the back of the net twice. If you're a glass half full person, at least the Sabres got some production from a few players who have needed to step things up in the offensive zone.

Admitting when you're wrong

When Montreal traded Alex Galchenyuk to Arizona for Max Domi I thought Marc Bergevin was insane. Oh boy was I wrong. Domi yet again was one of the Canadiens most dangerous players, sending two perfect passes to teammates on 2-on-1s that lead to goals. He added another assist on Shaw's first-period goal, giving him three assists on Thursday and five points in two games against the Sabres this season. He's fitting in incredibly well and clearly, I was wrong. That feels good.