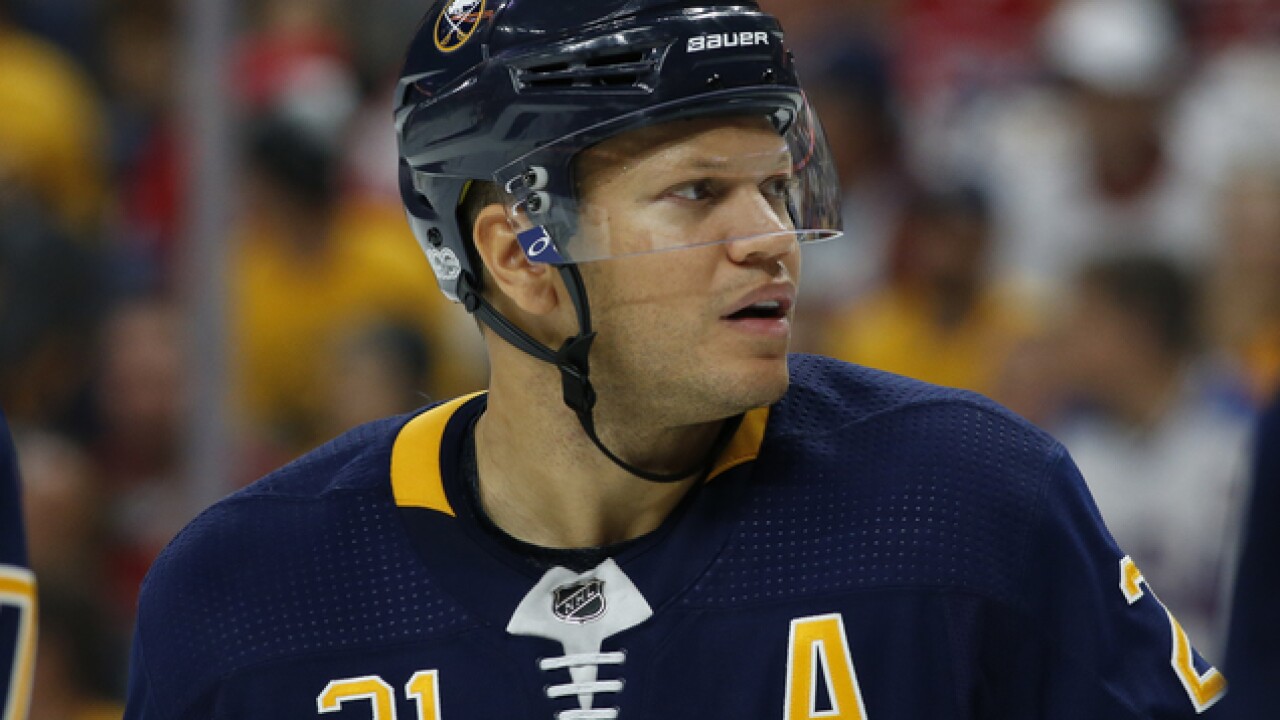 Copyright 2018 Scripps Media, Inc. All rights reserved. This material may not be published, broadcast, rewritten, or redistributed.
Kevin Hoffman
<p>BUFFALO, NY - OCTOBER 5: Kyle Okposo #21 of the Buffalo Sabres during the game against the Montreal Canadiens at the KeyBank Center on October 5, 2017 in Buffalo, New York. (Photo by Kevin Hoffman/Getty Images)</p>

In their final matchup of the season, the Buffalo Sabres once again knocked off the Boston Bruins, topping their division rival 4-1. With their win, the Sabres take the season series 3-1. Benoit Pouliot, Kyle Okposo, Evan Rodrigues and Marco Scandella scored for the Sabres, while Charlie McAvoy scored the Bruins lone goal.

Rick Nash walked into KeyBank Center around 2:45 p.m. as he joined his new team. With his trade Sunday morning, Evander Kane likely becomes the most notable forward available before Monday's deadline.

While Kane and Nash certainly have their differences, Jason Botterill has to like what the Bruins gave up to add a much older forward with fewer points this season. Not only did the New York Rangers receive a first-round pick for Nash, they were also sent Ryan Lindgren (solid prospect), Ryan Spooner, Matt Beleskey and a seventh-round pick. If the Sabres can get a similar haul for Kane, fans should be elated, especially considering Kane could walk for nothing in the summer. With less than 24 hours until the deadline things are about to get fun.

With Pouliot's name getting thrown around in trade rumors, his 12th goal of the season certainly didn't hurt his value. Although he's been erratic and at times a defensive liability, Pouliot has proven to be a pleasant surprise this season and could likely be a nice depth player for a team looking to make a deep playoff run.

Get them some oxygen

At the end of the second period, the Bruins had the Sabres pinned in their own zone for what felt like an eternity. Nathan Beaulieu had the longest shift while trying to fight off the Bruins attack and was on the ice for more than four minutes! Justin Falk, Jason Pominville, Johan Larsson and Pouliot were also on the ice, each for more than three minutes. It wasn't pretty but they kept the Bruins at bay and off the scoreboard.

Before Sunday's game Sabres head coach Phil Housley told reporters he chose to play Chad Johnson because of his strong outing the last time these teams met. Johnson was once again great, turning away 34 of the 35 shots he faced. Like Lehner and the rest of his teammates, Johnson has had a season full of ups and downs but lately has been much better. If Lehner is dealt on Monday like some have speculated, be prepared for plenty of Johnson down the stretch.

Good for Brian Gionta. The former Sabres captain is officially a member of the Boston Bruins and will join the team at practice on Tuesday.

"We consider him obviously a proven NHL player," Bruins coach Bruce Cassidy told John Vogl of the Buffalo News about Gionta. "I don't know him well enough yet to see where he fits. I know he just played in the Olympics, but he hasn't been playing all year, so where is his hockey stamina right now? "The thing we do have is a lot of games in March, so we have plenty of time to see where these guys best fit."

Gionta has had a very successful NHL career and deserves to go out on his own terms. Despite his lack of production at the recent Olympic games with Team USA, Gionta will bring veteran leadership and add depth into a Bruins locker room poised to make a deep playoff run.