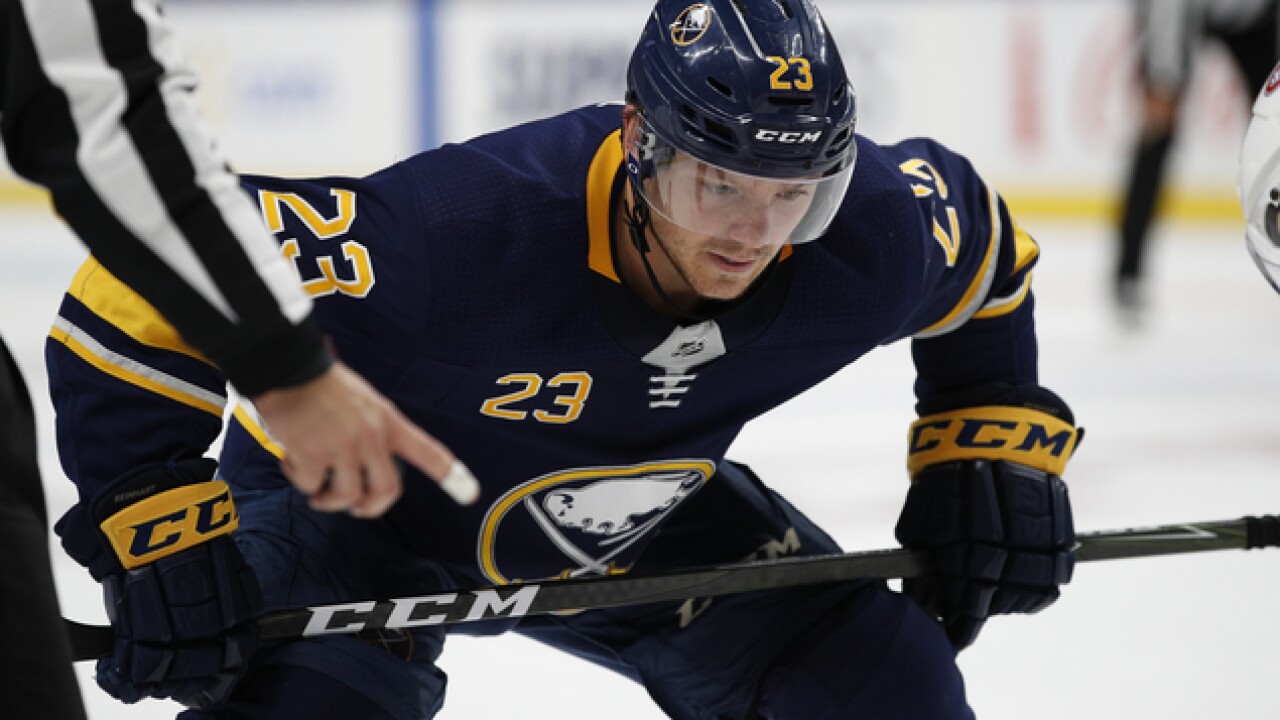 Copyright 2018 Scripps Media, Inc. All rights reserved. This material may not be published, broadcast, rewritten, or redistributed.
Kevin Hoffman
<p>BUFFALO, NY - OCTOBER 5: Sam Reinhart #23 of the Buffalo Sabres during the game against the Montreal Canadiens at the KeyBank Center on October 5, 2017 in Buffalo, New York. (Photo by Kevin Hoffman/Getty Images)</p>

With seven minutes left in the third period, fans at KeyBank Center started singing the Bills shout song. It was their way of thanking the Buffalo Sabres for a rare win on home ice as they knocked off the league-best Tampa Bay Lightning 5-3.

Pulling their own weight

With Jack Eichel out of the lineup indefinitely players like Ryan O'Reilly, Sam Reinhart, and Kyle Okposo need to take their games to the next level.

Sam Reinhart has 16 points in 13 games. This is fine #Sabres @WKBW pic.twitter.com/epqwuj5CrY

All three stayed hot, combining for six points in the Sabres' win.

For some perspective, take a gander at their current production:

O'Reilly and Reinhart were especially noticeable, creating several great chances all night. For Jason Botterill, Phil Housley and fans this has to be a welcomed sight after all three players had slow starts to the season.

Casey Nelson has four points in five games and is continuing to impress at both ends of the ice. After rough performances in his first two games this season, Nelson has been one of the Sabres best defenders.

As we move along he is logging more and more ice time in almost every situation. 31 career games is still a very small sample size but you have to like the direction Nelson is heading. If he keeps this up he'll be on the opening night roster next season.

Nick Baptiste can fly and that was evident on the first goal of the night. As he soared down the ice he made the Lightning defensemen look like they were moving in slow motion.  You have to wonder -- why hasn't he been able to become a regular in the lineup?

In 23 career games, Baptiste has five goals. That won't jump off the page but for a bottom-six forward there is nothing wrong with that kind of production [pace of about 15 goals per season].

His play in the defensive zone and his lack of consistency are two of the biggest reasons why he hasn't stuck around for an extended look. Tuesday was a good start but he needs to keep making an impact.

Lightning backup Louis Domingue has struggled this season, registering only two wins on 11 attempts. That said, the Sabres needed to make it a point to put pressure on him early and often.

That they did, jumping out to a quick start thanks to the efforts of Baptiste. However, they quickly cooled down halfway through the first period, watching a 7-4 shot advantage quickly turn into a 13-8 shot deficit.

In the second period, they stuck to the plan, outshooting Tampa Bay 12-9 and scoring twice. Less than five minutes into the third the Sabres were rewarded yet again with a power play goal from Ryan O'Reilly.

With a 3.88 goals against average heading into the night, the Sabres had to like their chances of putting at least a few behind Domingue. After a so-so start they got pucks to the net and sure enough, their shots went in. That's a pretty novel concept, huh?

Sunday was quite possibly Rasmus Ristolainen's worst game as a pro. On Tuesday against Tampa Bay he was much, much better, leading the Sabres in ice time and picking up an assist on the O'Reilly goal.

What made Sunday so bad were the egregious mistakes that led to Colorado goals. We didn't see any of those against the Lightning and he looked more comfortable with the puck on his stick.