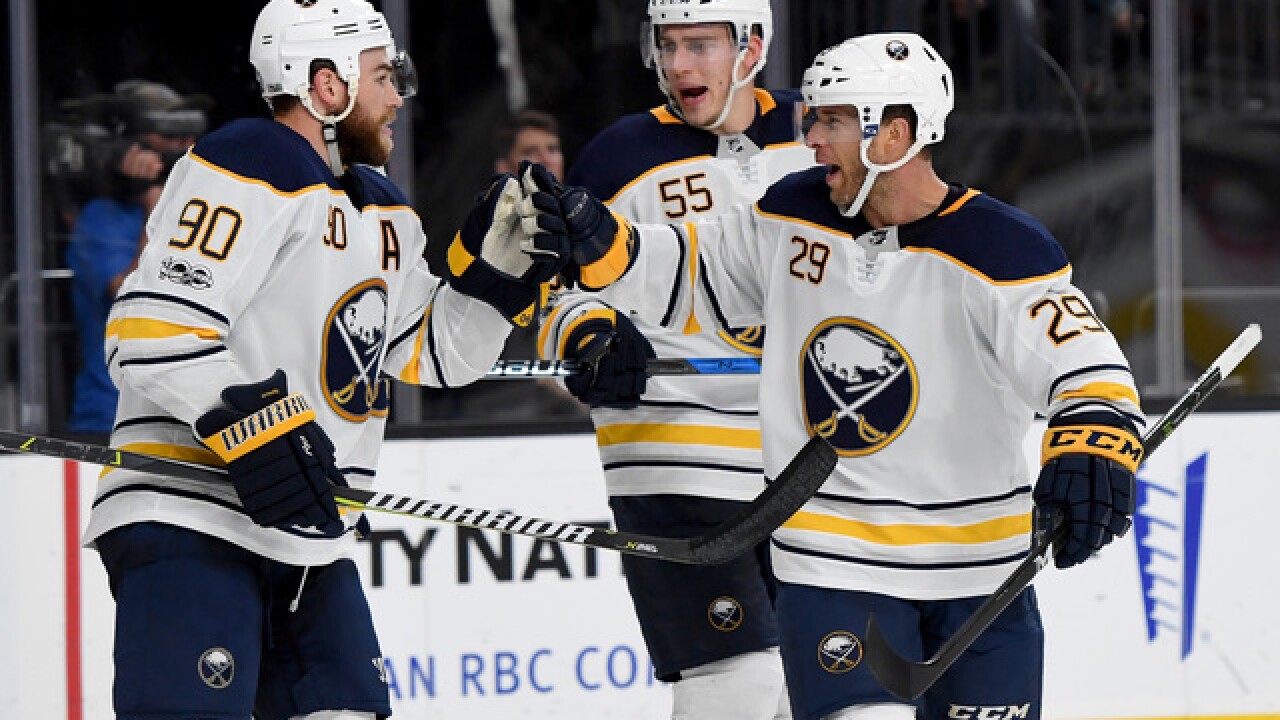 Copyright 2018 Scripps Media, Inc. All rights reserved. This material may not be published, broadcast, rewritten, or redistributed.
Ethan Miller
<p>LAS VEGAS, NV - OCTOBER 17: (L-R) Ryan O'Reilly #90, Rasmus Ristolainen #55 and Jason Pominville #29 of the Buffalo Sabres celebrate after teammate Evander Kane (not pictured) #9 scored against the Vegas Golden Knights to tie the game at 4-4 with nine seconds left in the third period of their game at T-Mobile Arena on October 17, 2017 in Las Vegas, Nevada. The Golden Knights won 5-4 in overtime. (Photo by Ethan Miller/Getty Images)</p>

Despite trailing for the majority of the game the basement-dwelling Buffalo Sabres knocked off the league-best Tampa Bay Lightning with a 2-1 win in overtime. Chad Johnson stopped 21 of 22 shots faced while Jason Pominville and Evan Rodrigues scored for the Sabres.

Monkey off his back

At the end of the first period, Jason Pominville was robbed right in front of the net. In the second period, Pominville came oh-so-close yet again, only to just miss on a wraparound. Can this guy even buy a goal?

Turns out he can.

Pominville was saving the best for last. For the first time in 20 games, Pominville found the back of the net, giving the Sabres their fifth overtime win of the season.

In his last five games, Chad Johnson has looked like a different goaltender. After an underwhelming start to the season, Johnson has been consistently impressive and won four of his last five starts. Time and time again Johnson has said that he needed to stay positive and things would turn around. He was right and will likely get a bigger chunk of the remaining games because of it.

Chad Johnson has now won four of his last five starts. During that span he has allowed nine goals #Sabres

Evan Rodrigues and Scott Wilson have been two of the lone bright spots this season for the Sabres. On Wednesday Rodrigues scored his sixth goal of the season and created several chances before finally finding the back of the net.

Evan Rodrigues and Scott Wilson should be on this team next year. They are perfectly capable bottom-six forwards. Versatile with some offensive upside #Sabres

Wilson was also impactful, setting up Ryan O'Reilly next to the net for one of the Sabres best opportunities of the evening. Neither Wilson or Rodrigues should be expected to score regularly but both are solid defensively and provide the offensive upside the Sabres need out of their bottom-six. Rodrigues is under contract next season while Wilson is a restricted free agent. I'd imagine Jason Botterill will do whatever he can to keep Wilson if the price is right.

Let's not get carried away....

The Lightning are light-years ahead of the Sabres in almost every aspect of the game but on Wednesday the team wearing blue and gold was superior. Yes, it felt weird typing that sentence.

It's hard to believe the Sabres have knocked off the Lightning twice in the last 15 days. From start to finish the Sabres played a solid game, something we haven't been able to say very often this season.

Fun might be a stretch. If you can't tell, we're trying to look at this glass half-full.