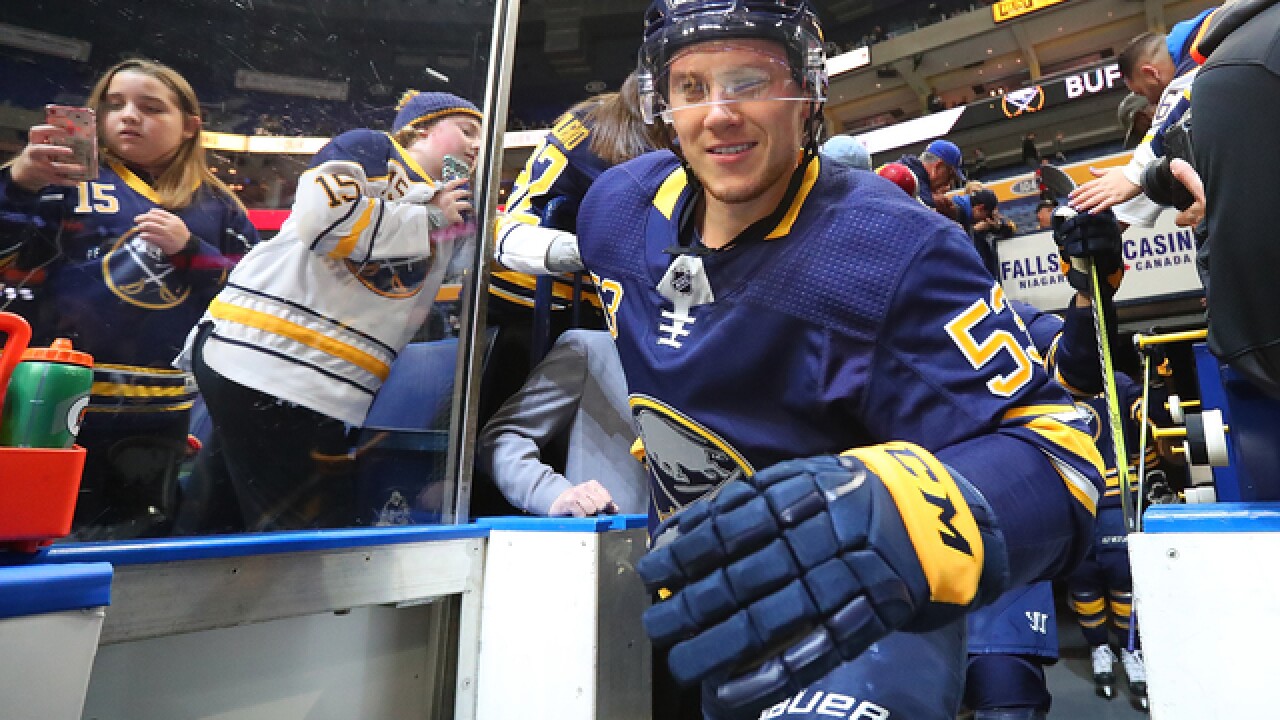 Copyright 2018 Scripps Media, Inc. All rights reserved. This material may not be published, broadcast, rewritten, or redistributed.
Kevin Hoffman
<p>BUFFALO, NY - OCTOBER 25: Jeff Skinner #53 of the Buffalo Sabres before the game against the Montreal Canadiens on October 25, 2018 in Buffalo, New York. (Photo by Kevin Hoffman/Getty Images)</p>

In the third period, KeyBank Center erupted into a "one, two, three, four, five, six, seven, eight, nine, want 10!" chant as the Buffalo Sabres knocked off the Ottawa Senators 9-2 in their most lopsided win since 2009 [01/27/09]. It was just one of those days for the Senators, while the Sabres end a three-game losing streak and improve to 7-5-2 on the season.

It didn't take long for the Sabres to completely take control of Saturday's game. Within minutes it was obvious the Senators were going to have their hands full. Before the first period was concluded the Sabres already had a commanding 3-0 lead.

Up to this point, one of the Sabres biggest problems has been the lack of secondary scoring. As it currently stands, Jack Eichel, Jeff Skinner, and Jason Pominville have combined for half of the Sabres goals after 14 games. While it's to be expected that the Sabres first line contributes the most offensively, the Sabres need more from guys like Sam Reinhart, Kyle Okposo, Conor Sheary and Casey Mittelstadt.

That said, on Saturday afternoon the Sabres finally got some of the secondary scoring they've been missing thanks to Okposo, Sheary, Mittelstadt, Zemgus Girgensons, and Patrik Berglund.  Moving forward the Sabres will need more from their second, third and fourth lines if they are going to continue taking steps in the right direction. Relying on one line isn't going to win a team very many games.

Everything was going according to plan until Sabres rookie defenseman Rasmus Dahlin took a shot in the lower leg/ankle in the final minutes of the second period. Dahlin went to the locker room and didn't return for the final 20 minutes. According to Darren Dreger of TSN, "Injury isn’t believed to be serious. Sabres play tomorrow as well. Dahlin re-evaluated tomorrow." After the game, Phil Housley declined to provide any further details regarding the injury to Dahlin but said he thinks Dahlin will travel to New York.

After returning to the lineup Evan Rodrigues was the only forward to not register a point in Saturday's win. Sad! However, Rodrigues made his presence felt and was solid all game. Unless injured, I think Rodrigues should be in the lineup every night.

Since the turn of the century few Sabres players, if any, have been as loved by fans as Jason Pominville. Although he skated in his 1,000th game on Thursday in Ottawa, Pominville returned home to a gracious welcome by an arena full of fans holding "Welcome to Pominville" signs. The pregame festivities started with Pominville's parents and family out on the ice while the team played a video of his highlights over the years featuring well wishes from former teammates. How fitting that the former Sabres captain would score twice and would be named the first star in a game where he was honored.