5 Observations: Sabres shut out by Canadiens 3-0 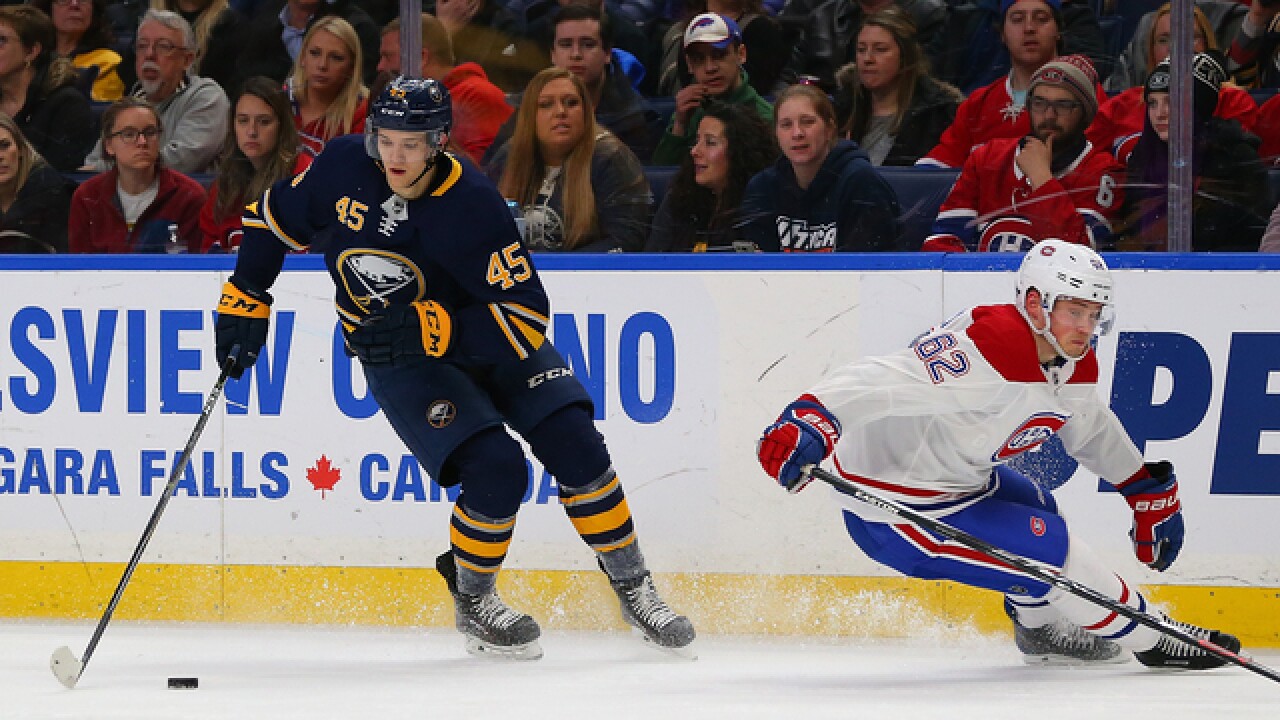 Copyright 2018 Scripps Media, Inc. All rights reserved. This material may not be published, broadcast, rewritten, or redistributed.
Kevin Hoffman
<p>BUFFALO, NY - MARCH 23: Brendan Guhle #45 of the Buffalo Sabres skates up ice with the puck as Artturi Lehkonen #62 of the Montreal Canadiens defends during the second period at KeyBank Center on March 23, 2018 in Buffalo, New York. (Photo by Kevin Hoffman/Getty Images)</p>

Housley: "Some guys like to put things in their own hands and they think it's going to work. Well it hasn't." #Sabres 👀

In three games played this week the Sabres have only one goal [one goal in nine periods]. Friday proved to be another glorious example of why the Sabres have found the back of the net fewer than any other team. For those keeping track at home, the Arizona Coyotes, who have also spent the entire season in the league basement, now have 11 more goals than the Sabres.

Their best opportunity to score a goal came in the third period when they had a 1:06 two-man advantage. Buffalo maintained good zone pressure but couldn't beat Niemi. Along with bolstering the blue line, Buffalo desperately needs to add some secondary scoring in the offseason. Aside from Jack Eichel, Ryan O'Reilly, and Sam Reinhart, no other player has more than 38 points.

The #Sabres have played three games this week. They have scored once. pic.twitter.com/L03F9L4n5v

Credit where credit is due, Canadiens goaltender Antti Niemi was the best player on the ice Friday. Buffalo actually outshot the Canadiens 35-24, but Niemi was perfect from start to finish. That said, it's ridiculous that the Sabres have only one goal in their last nine periods played.

In only his third start of the season, Linus Ullmark was once again impressive, making a few big saves to keep his team within striking distance. With only eight games left this season, Ullmark should get at least four more starts as the Sabres determine whether or not he's ready to be a full-time starter in the NHL next season.

It's the final countdown

It's hard to believe that the Sabres have only two games left on home ice this season. When considering how badly they've performed at KeyBank Center, that's not necessarily a bad thing.

Buffalo has only 11 wins on home ice this season, the fewest in the NHL. No other team in the Eastern Conference has fewer than 15 wins at home. Everything is not fine.

How can this be an observation from the game? Well, it isn't, but Will Borgen's season ended a half an hour before puck drop between the Sabres and Canadiens, so this seemed relevant.

Borgen, who just finished his junior season with St. Cloud State, joins Casey Mittelstadt as the second most highly touted prospect GM Jason Botterill would like to get signed. As Kris Baker from SabresProspects.com said:

"Season done for third-year D Will Borgen as St. Cloud State, the top overall seed, is defeated by Air Force 4-1. Not being overdramatic, but Borgen is a must-get for Botterill to build depth."