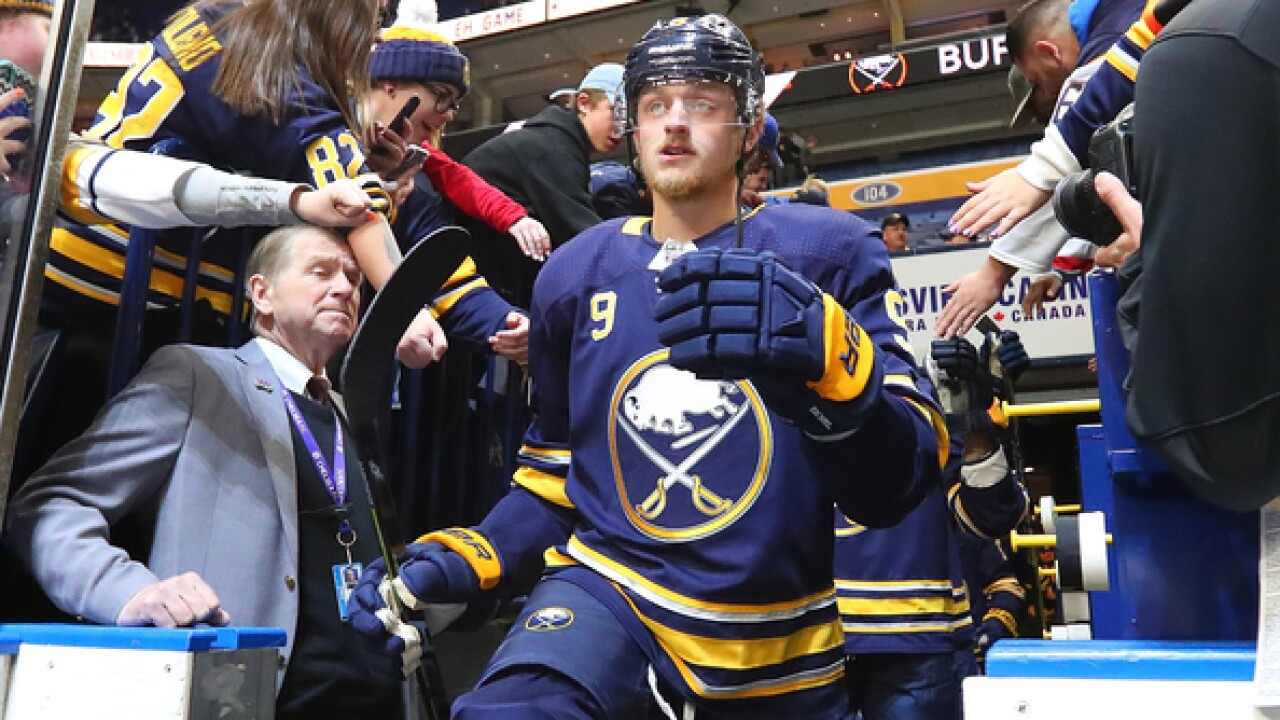 Copyright 2018 Scripps Media, Inc. All rights reserved. This material may not be published, broadcast, rewritten, or redistributed.
Kevin Hoffman
<p>BUFFALO, NY - OCTOBER 25: Jack Eichel #9 of the Buffalo Sabres heads to the ice for warm-ups before the game against the Montreal Canadiens at the KeyBank Center on October 25, 2018 in Buffalo, New York. (Photo by Kevin Hoffman/Getty Images)</p>

In the first battle of the QEW this season the Toronto Maple Leafs topped the Buffalo Sabres 4-3 in overtime. Auston Matthews scored the game-winner with just 2.7 second left, converting on his second goal of the night. Jake Gardiner scored the other Toronto goal while Sam Reinhart and Jack Eichel [twice] scored for the Sabres. With the loss, Buffalo falls to 17-8-4 on the season.

I know this one stings #Sabres fans.

But that was a damn good effort by the Sabres.

It's a good thing the Sabres gave themselves some wiggle room with their 10-game win streak. It goes without saying -- the last thing this team wanted to do was drop four consecutive games after tying the longest win streak in franchise history. But here we are, as the Sabres dropped their fourth straight game and 12th of the season [17-8-4].

Don't get me wrong, they have played three fantastic teams in their last four games. But if the Sabres are going to turn the corner and become a playoff contender, they need to mix in some wins against the powerhouses of the NHL.

Jack Eichel, moments after the loss. Clearly frustrated but he said he liked the effort from his team on the second night of a back-to-back #Sabres @WKBW pic.twitter.com/YrUKEhZoFl

Yes, this is me waffling.

But despite the loss, it was a very impressive effort from the Sabres, especially on the second night of a back-to-back. For my money, of the four consecutive losses, this was the Sabres best effort. They probably deserved a win, outshooting Toronto 41-30.

Auston Matthews wins it in OT at the buzzer. 15th goal in 14 games to start the year pic.twitter.com/6YpTZaHbBk

It seems like Auston Matthews and Jack Eichel always show up when these two teams square off. Both American born superstars showed out, scoring crucial goals for their teams. Matthews got things going with one of the prettiest goals you'll see, converting on an alley-oop type play to beat Ullmark on a wraparound.

As for the Sabres captain, he snapped his seven-game scoreless streak with a beautiful one-timer in the third period. 10 minutes later Eichel buried his second goal of the evening, firing a wrist shot past Andersen from the slot. Ladies and gentleman, he's back.

Auston Matthews, however, had the last laugh, scoring the game-winner as he fired a perfect shot past Ullmark.

Moral of the story -- when these two teams play it's a lot of fun. Just give us a playoff series between Toronto and Buffalo.

First of all -- can we make OG Rasmus stick as a nickname for Rasmus Ristolainen? With three Rasmus' in the organization, this will help make it easier to figure out who we're talking about.

Okay, back to the game. In the first period, OG Rasmus was all over the place. When he wasn't trying to line up Mitch Marner or Nazem Kadri for a big hit, he was storming down the ice and trying to pull a between-the-legs move on Freddy Andersen. It almost worked.

In the third period, OG made his prettiest play. Rather than trying to force a shot through traffic, Ristolainen connected with Jack Eichel for a gorgeous one-timer to tie things up.

Rasmus Ristolainen was all over the place tonight. Jack Eichel noticed, calling him one of the best players on the ice #Sabres @WKBW pic.twitter.com/Uo7nIWI0b5

Ristolainen is going to occasionally get himself in trouble because of his eagerness to join to rush. But if he can limit the mistakes and create chances and pressure as he did on Tuesday, I have no issue with the mistakes that are bound to happen.

Linus Ullmark hasn't lost a game in regulation this season [5-0-3].

For much of the game, Ullmark was solid between the pipes, making a few solid saves.

His best came on John Tavares in the third period, as Ullmark snagged a shot with his glove to keep things tied at two.

Sure, he could've probably stopped the goal from Matthews in the second period or Marleau's from the side of the net in the third. But for the most part, Ullmark was fine on Tuesday.

Credit where credit is due -- Toronto's second goal in the final seconds of the middle frame was a thing of beauty. Mitch Marner dropped a pass to John Tavares, who slid the puck to a wide-open Jake Gardiner for an easy goal. It was a gorgeous passing play and it gave Toronto their second lead of the game.

That said, I want to know why Johan Larsson is firing a puck back towards the blue line while he's falling over. I totally understand he's trying to get the puck back to the point to generate a shot from the blue line. But before his "pass" even got to the defender it was intercepted as Toronto broke down the ice with an odd-man rush. That led to Gardiner's goal seconds later and what should've been a tied game after 40 minutes became a 2-1 Toronto lead.