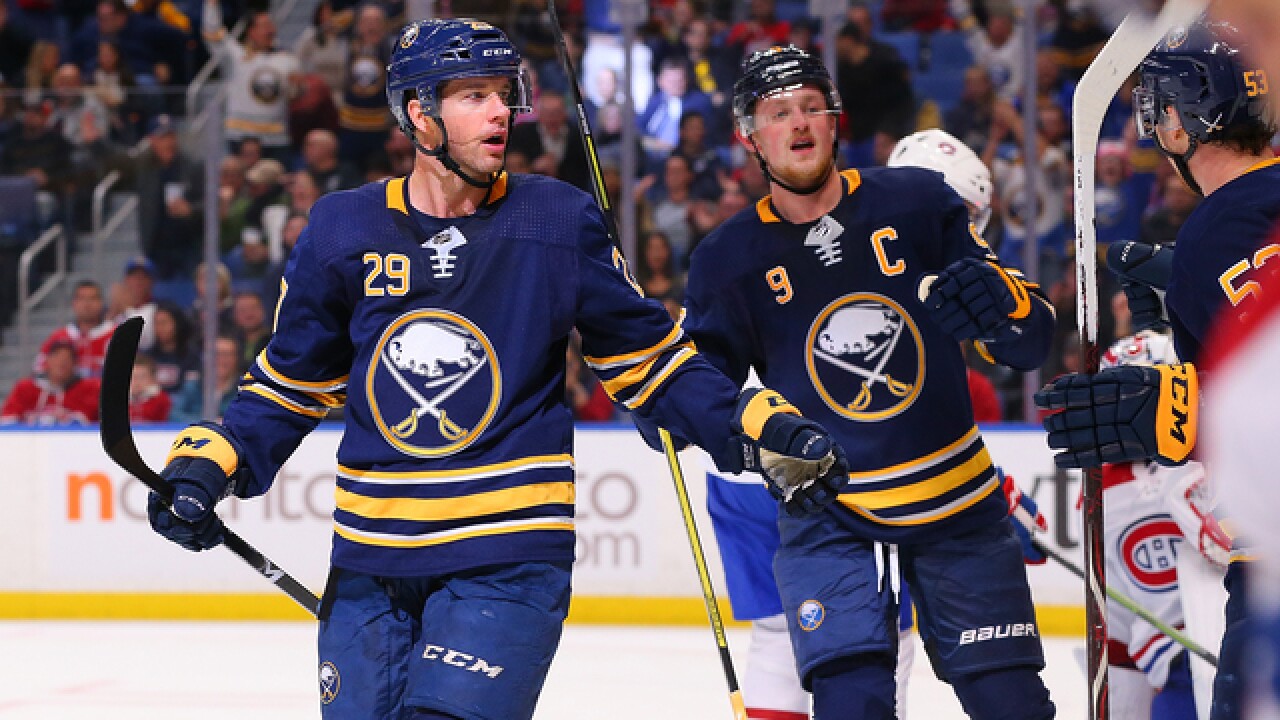 Copyright 2018 Scripps Media, Inc. All rights reserved. This material may not be published, broadcast, rewritten, or redistributed.
Kevin Hoffman
<p>BUFFALO, NY - OCTOBER 25: Jason Pominville #29 of the Buffalo Sabres celebrates his goal against the Montreal Canadiens during the second period at the KeyBank Center on October 25, 2018 in Buffalo, New York. (Photo by Kevin Hoffman/Getty Images)</p>

Don't call it a comeback. On Thursday night the Buffalo Sabres came back from three separate deficits to knock off the Montreal Canadiens 4-3. Kyle Okposo scored the game-winner in the final minutes on the power play, giving the Sabres their sixth win of the season [6-4]. Jason Pominville added two goals and Jeff Skinner tallied three assists in the win.

Was there ever a doubt? After a slow 10 minutes to start the night the Sabres dominated Montreal in almost every aspect of the game. Even when Montreal scored late to take the lead it felt like the Sabres were going to tie things up.

After the game, both Okposo and Jake McCabe credited the win to consistent pressure and trusting their system.

At six o'clock I said on @WKBW the #Sabres needed more out of Kyle Okposo. When the game was on the line he stepped up big @WKBW pic.twitter.com/G6V6TtXF39

Jake McCabe was one of the #Sabres best players tonight. He said his team is sticking to their game plan, which hasn't always happened in years past @WKBW pic.twitter.com/pDhT6xWi5x

During their first homestand, Carter Hutton was arguably the Sabres most valuable player. In the Sabres return to Buffalo, Hutton had a rough night, allowing a few goals he'd surely like back.

Of the three goals he allowed, none was worse than Max Domi's second of the evening. Domi stormed down the ice with speed, throwing a wrist shot at the net from outside the slot. Hutton reacted late and Domi had his second goal of the evening.

With the score tied in the third period, Hutton needs to make that save. I'd be surprised if the Sabres didn't give Linus Ullmark [2-0] the nod on Saturday when they take on Columbus.

See what I did there? Kudos if you're picking up what I'm putting down.

With his two goals against the Canadiens on Thursday, Jason Pominville now has more goals [four] than every Sabres player not named Jeff Skinner. Playing alongside the afformentioned Skinner and Jack Eichel has given the Sabres veteran a spark and it's paying off big time.

Will Pominville stay this hot? Probably not. But at 35-years-old you'd have to imagine the Sabres would be thrilled if Pominville could pot 20 goals this season.

Coaches love when they call roll all four lines. On Thursday Phil Housley had that luxury, relying heavily on the trio of Patrik Berglund, Johan Larsson, and Zemgus Girgensons. As a unit, the three veterans applied serious pressure in the offensive zone while playing a sound game defensively. Based on their performance on Thursday, I'd imagine the Sabres keep using this same lineup moving forward.

The offense will come

Eventually, Casey Mittelstadt is going to get the monkey off his back. In the first 10 games of the season, Mittelstadt has come oh so close to scoring his first of the season. But every time it appears he'll finally find the back of the net he hits the post or just misses wide.

You'll be hard pressed to find a young player with more skill than Mittelstadt. Sooner rather than later the pucks will start finding the back of the net and I'm sure he's hoping there will be a domino effect.

It was a less than ideal first period for Marco Scandella, who has looked underwhelming in the Sabres first 10 games this season.

His first big mistake of the night came just minutes into the game when Montreal took the lead. Scandella miscalculated a rush and failed to take the clear a loose puck out of the zone, giving a charging Max Domi a great look that beat Hutton. If Scandella would've been able to clear the zone it would've likely been a play nobody remembered. Instead, it turned into a sloppy goal that should've been avoided.

Minutes later Scandella made his second big mistake of the evening. Montreal was once again coming up the ice with speed and Scandella left Andrew Shaw unattended in front of the net. Luckily for Scandella, this time Hutton was there to shut the door.

Last year, Scandella was a reliable defender who was often asked to do too much. In the first 10 games,  he's made a few mistakes that seem a bit uncharacteristic. I expect he'll tighten things up in the near future but the Sabres need more from one of the most experienced players on their team.