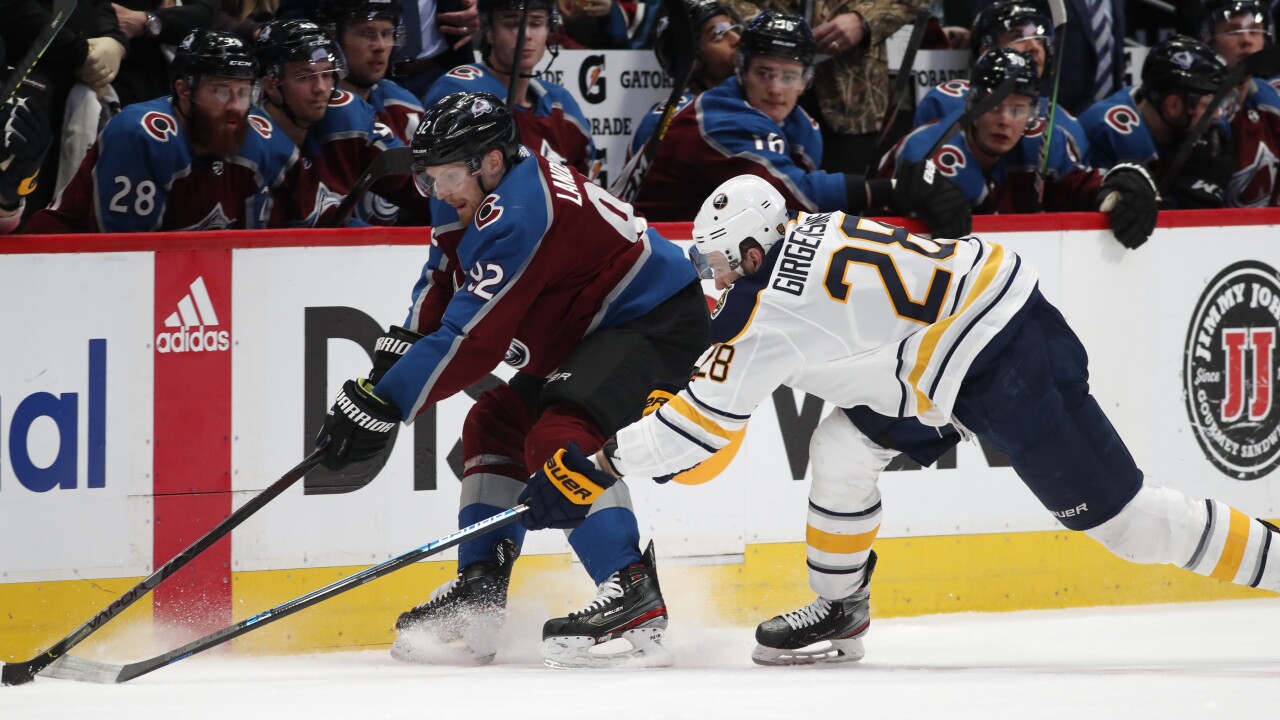 BUFFALO, N.Y. [WKBW] — Despite a strong effort in Colorado, the Sabres began their West Coast road trip with a loss, falling to the Colorado Avalanche 3-2. Former Sabre prospect J.T. Compher scored the game-winning goal with just 8:08 left to play, ultimately lifting the Avs to victory.

Strong Effort from the goaltenders

Carter Hutton continued his impressive month of February, despite his team coming up short. If it weren't for Hutton, Colorado could've put the Sabres away in the second period with any of their exceptional scoring chances. Aside from a rough night against the Senators, Hutton has been exceptional for the Sabres since Linus Ullmark was injured.

At the other end of the ice, Pavel Francouz was equally as impressive Wednesday, turning away several quality scoring chances from the Sabres.

Once again the line featuring Johan Larsson, Kyle Okposo, and Zemgus Girgensons was dominant in every aspect of the game. They combined for the Sabres first goal of the night as Okposo found Girgensons streaking to the net for an easy goal.

While the offense is nice, what was even more impressive about the LOG line was how they handled the Avs top line featuring Nathan MacKinnon. As pointed out by Jourdon LaBarber of Sabres.com, the trio has combined for 12 points in five games, playing mostly against opponents top lines.

Both Larsson and Girgensons have expiring contracts and would need to be resigned this summer. General Manager Jason Botterill should think long and hard about bringing both players back and reuniting the group for at least one more season.

It was strange watching Wayne Simmonds wear a Sabres sweater. After terrorizing the Sabres for so many years, it took some getting used to watching him hammer players into the boards on the other team.

He by no means had a stellar debut, but he came in and did exactly what he was brought here to do. It felt like his physicality led to more finished checks from his new teammates. As he gets more comfortable with his new squad his responsibilities will likely increase. But for his first game with the Sabres, Simmonds did a nice job.

Not so special teams

Despite some solid hockey at five-on-five, the Sabres couldn't contain the Avs high powered attack on the power play. Colorado's first two goals came with the extra man, wiping out the sound hockey the Sabres played at even strength for most of the night. As for the Sabres, they failed to convert on both of their opportunities with the power play. It's hard to win games when one team scores two of their three goals on the power play and the other team goes 0-for-2.

So much for those games in hand

Here's how things stand for the Sabres as of Wednesday night.

Toronto has an eight-point cushion with 74 points, compared to the Sabres 66 points. Buffalo still has one game in hand on Toronto but falls farther from the Maple Leafs with the loss to Colorado. As for the Panthers, the Sabres are six points behind Flordia with the same amount of games played. Essentially, the Sabres need to win the rest of their games on the road trip or they could fall into too large of a hole to climb out of.