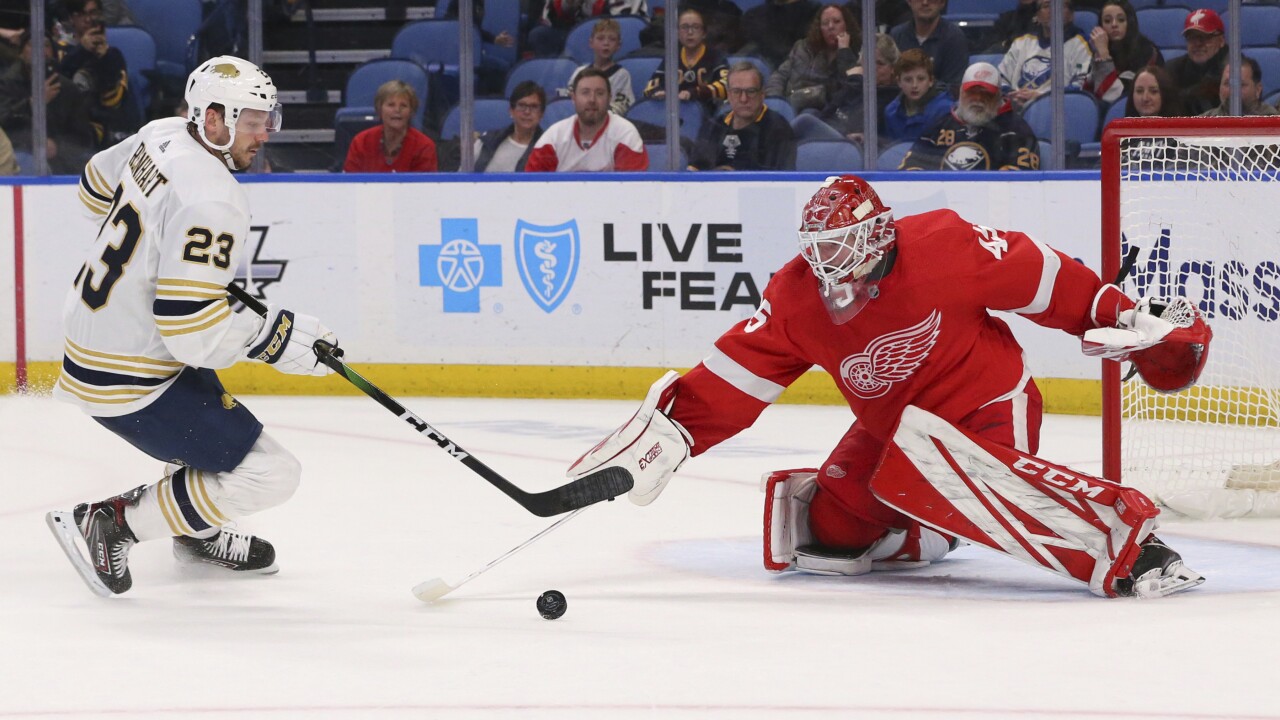 BUFFALO, N.Y. (WKBW) — Despite rallying from behind and scoring three goals in the third period, the Sabres fell 4-3 in a shootout to the lowly Red Wings, dropping their fourth game since returning from the All-Star break. Jonas Johansson made his first career start, stopping 18 of Detroit's 21 shots in the loss.

Entering Thursday's matchup, the Red Wings had only won four games on the road this season. In their last 10 games, they had just one win. Then they played the Sabres and their fortune changed.

Of all the Sabres losses this season, this might be the most frustrating. After folding like a cheap table on Tuesday, this is how the home responded against the historically bad Red Wings? So much for using the adversity as motivation. If it weren't for a strong effort in the third period, this game would've been the worst performance of the season for the Sabres.

Over the last four years, I've covered more than 100 Sabres home games. I can't remember the atmosphere in the arena ever being as bad as it is now. Every night there are hundreds, if not thousands, of empty seats in the lifeless building that the Sabres call home. And who can blame for fans for staying home? The team is playing terrible, the game presentation is predictable and games just aren't fun. Unless a Canadian team is in the building, this is likely going to be the new norm for the remainder of the season.

All season the Sabres have had a hard time scoring goals but these last five games have been especially bad. Since returning from the All-Star break the Sabres have just nine goals in five games. You aren't going to win many games when you're averaging less than two goals a game. Especially with a rookie goaltender in net.

Johansson was fine in his first NHL start. He wasn't great, he wasn't bad, he was just fine. Despite allowing two goals in the first period, Johansson played better as the game moved along, making some nice saves in the second period to keep the Sabres within striking distance. In the shootout he struggled, allowing two goals on two shots. Overall it wasn't Johansson's fault the Sabres lost Thursday and I'd imagine he gets another start this weekend.

I don't understand why Jeff Skinner didn't get a single shift in overtime. Sabres head coach Ralph Krueger danced around the question when asked about it afterward, saying he thought Skinner had a strong game but wasn't part of the overtime plan.

HE'S THE SECOND HIGHEST PAID PLAYER ON THE TEAM!

I rarely use all caps -- but you get my point. Sure, he's having a hard time finding the back of the net but he's without question the Sabres second most dangerous player. He should be on the ice in OT.