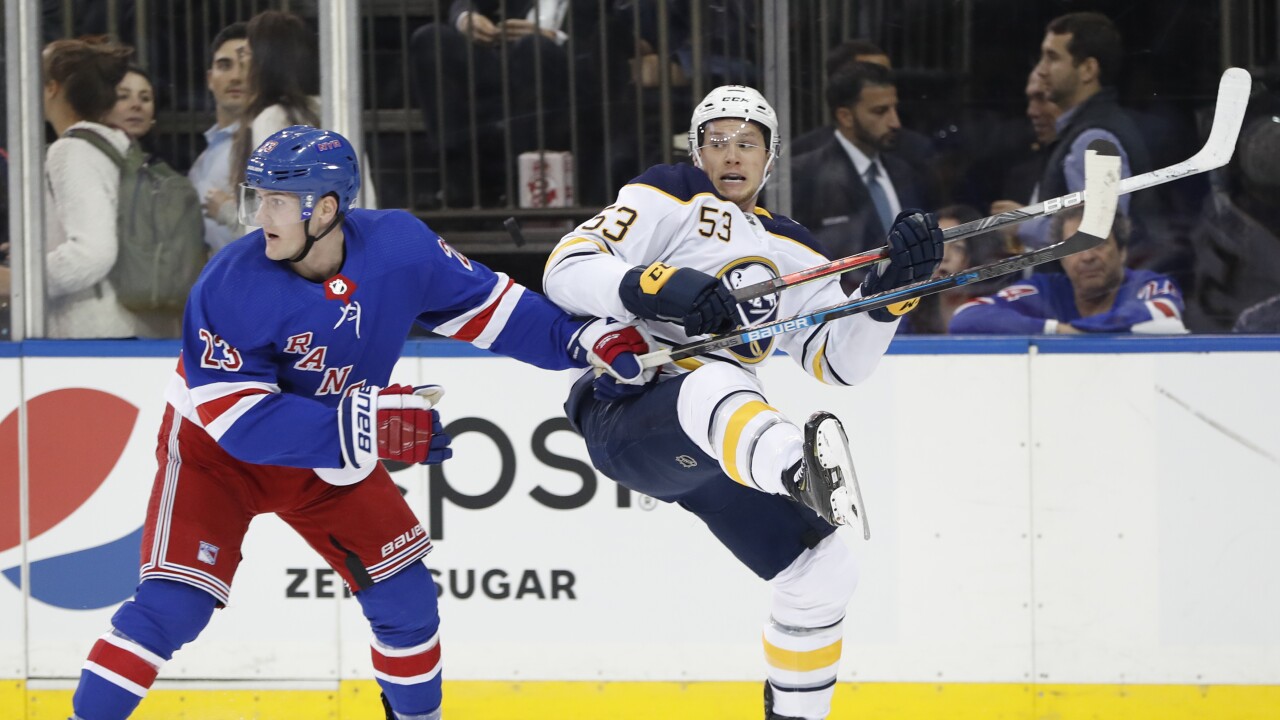 BUFFALO, N.Y. (WKBW) — For only the second time this season the Buffalo Sabres lost in regulation, falling to the New York Rangers 6-2 on Thursday night. With the loss, the Sabres slip to 8-2-1 on the season.

In an 82-game season, you're bound to lay an egg every once in a while. With the start the Sabres have had this game was probably overdue. But one bad game is no reason to slam on the panic button. There are certainly reasons to be concerned -- but the Sabres won't have to wait long for a chance to rebound.

A dreadful night for Dahlin

Rasmus Dahlin had one of his worst games as a member of the Buffalo Sabres. In the first period, he mishandled a puck, allowing an easy goal for Rangers forward Artemi Panarin, who went in all alone.

Minutes later Dahlin and partner Colin Miller once again got pinned in their own end and this time it was Brett Howden who scored for the Rangers.

In the second period, after a nice start for the Sabres, Dahlin and his teammates once again got pinned in their own end. As we saw him do so many times on Thursday, Dahlin hit the ice to try and take away a passing lane. Instead, Pavel Buchnevich waited for an extra second and was able to find a wide-open Tony DeAngelo.

Besides the first-goal, Dahlin doesn't deserve all the blame on either of the other aforementioned goals. But it just wasn't a very good outing for the youngster. That'll happen, especially with a player who is still so raw -- no need to panic.

Carter Hutton has been exceptional for the Sabres this season. On Thursday against the Rangers, he was just average and it ultimately resulted in his first loss of the season. Nobody should be blaming the goaltending for this loss -- it's just a reminder than Hutton and Ullmark are destined to come back down to earth at some point.

Time for a change?

It's easier for a coach to shake things up after a loss than after a win. Perhaps Ralph Krueger will now have a chance to move some guys up and down the lineup and see if it helps create a spark.

On defense, in particular, It might be a good time to separate Dahlin and Miller. While the other combinations have thrived, this duo had a rough game in Manhattan and has been inconsistent, at least compared to the other pairs. What's the worse thing that can happen?

For the most part, the Sabres have been pretty healthy so far this season. That changed on Thursday as they saw both Marco Scandella and Jimmy Vesey head to the locker room in the second period.

The good news for the Sabres is that Scandella was able to return in the final period. Vesey, however, did not. If his injury prohibits him from playing in Detroit, Evan Rodrigues will return to the lineup for his fifth game of the 2019-2020 season.