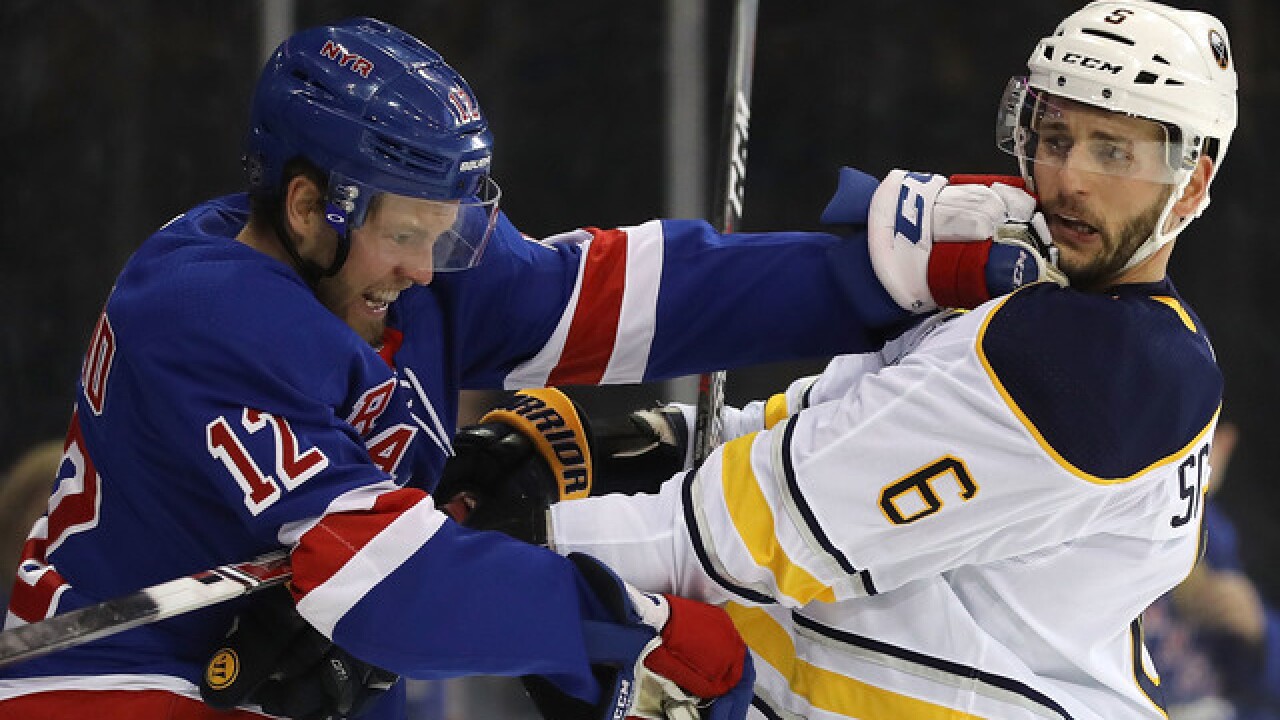 Copyright 2018 Scripps Media, Inc. All rights reserved. This material may not be published, broadcast, rewritten, or redistributed.
Abbie Parr
<p>NEW YORK, NY - MARCH 24: Peter Holland #12 of the New York Rangers and Marco Scandella #6 of the Buffalo Sabres get into a fist fight in the second period during their game at Madison Square Garden on March 24, 2018 in New York City. (Photo by Abbie Parr/Getty Images)</p>

In a year full of lopsided losses, the Buffalo Sabres may have had one of their most embarrassing outings of the season, falling to the New York Rangers 5-1. The Sabres have now lost four straight, scoring only two goals during that span.

In their last four games, the Sabres have two goals. Let that sink in -- two goals in four games! For those keeping track at home, the Sabres now have 12 fewer goals than the Arizona Coyotes, who have the second-fewest goals in the NHL. Rangers goaltender Alexandar Georgiev certainly deserves some credit, stopping 43 of the 44 shots he faced.

At one point during the Sabres broadcast, analyst Rob Ray said: "let's just go home....let's just leave." No truer words have ever been spoken.

If you care to be entertained, check out this thread. Warning, some language may be inappropriate.

Describe the #Sabres season with one word

Four in a row

It took the Rangers just four shots to a turn a 0-0 tie into a 4-0 lead. After the Sabres came flying out of the gate the Rangers found the back of the net on four straight shots, turning what was once a close game into a blowout less than nine minutes into the second period.

With only seven games left this season, there's a chance we never see Robin Lehner start another game for the Sabres. To be clear, I think Lehner will get at least one more start this season, but I wouldn't be shocked if Phil Housley rode Linus Ullmark until their last game.

*The status of Chad Johnson plays a major factor in how many starts Ullmark/Lehner/Johnson get in the final seven games.

With their recent struggles and atrocious year, Housley has to be on the hot seat, right? Well, sort of....

It seems like after every loss somebody on Twitter suggests that the Sabres need to move on from Housley. After just one season, I'd be shocked if the Sabres parted ways with another coach. Sure, Housley deserves a ton of criticism for how this season has gone. But I don't know if there is a coach on this planet who could've had success with the current Sabres roster.

During the second intermission of Hockey Night In Canada, we received a bit of an update on Sabres top prospect Casey Mittelstadt. According to Chris Johnston of Sportsnet, Mittelstadt is still weighing his options and will likely decide whether or not he wants to sign a pro contract sometime in the next few days. Johnston added that he believes the Sabres would like to sign Mittelstadt, but says the 19-year-old is also strongly considering returning for his sophomore season at Minnesota.

@reporterchris says there is "pressure" on @CMittelstadt to return to Minnesota for next season. By whom? Will Bob Motzko be his head coach? Mike Guentzel? The kid is in the drivers seat. Lucia recruited Mittselstadt. Lucia is gone. The kid has leverage and should use it wisely