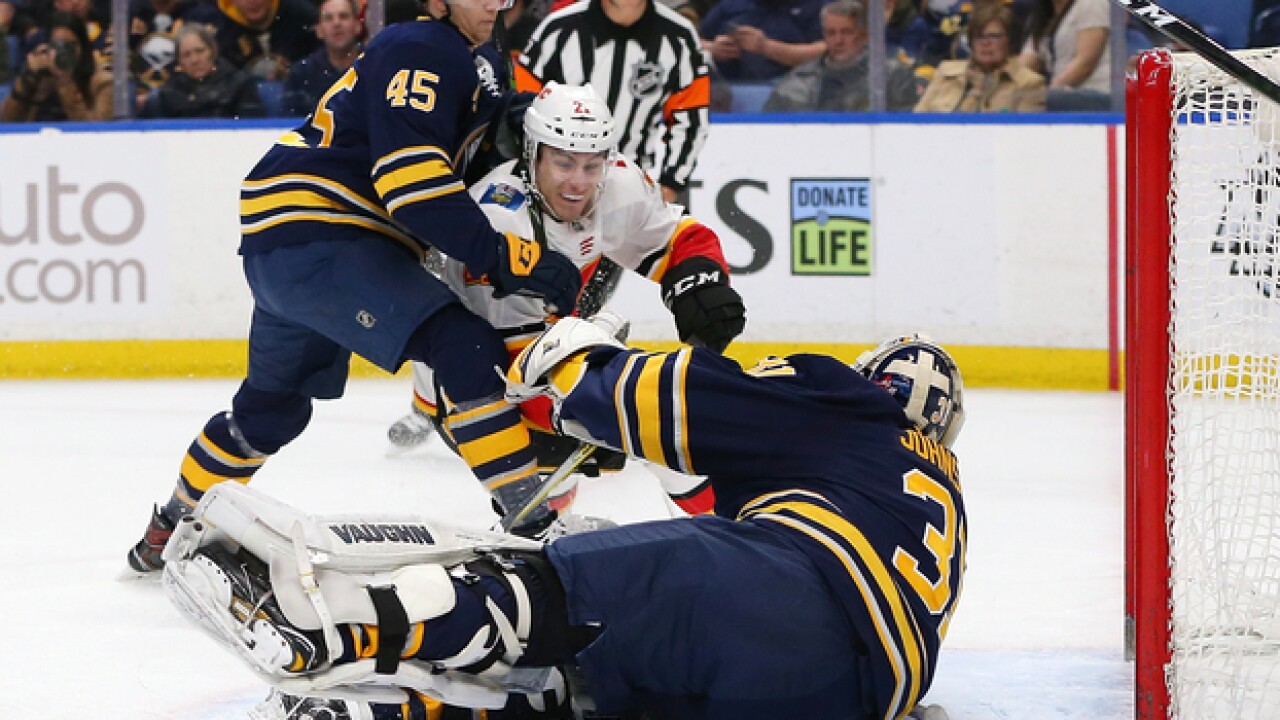 Copyright 2018 Scripps Media, Inc. All rights reserved. This material may not be published, broadcast, rewritten, or redistributed.
Kevin Hoffman
<p>BUFFALO, NY - MARCH 7: Chad Johnson #31 of the Buffalo Sabres makes a save against Garnet Hathaway #21 of the Calgary Flames as Brendan Guhle #45 defends during the first period at KeyBank Center on March 7, 2018 in Buffalo, New York. (Photo by Kevin Hoffman/Getty Images)</p>

It took less than nine minutes for the Calgary Flames to score their first and second goals of the night. Turns out, that would be all they needed, squashing the Buffalo Sabres 5-1. Casey Nelson scored the Sabres lone goal with just 17 seconds left.

You could make the argument that Chad Johnson has been one of the Sabres best players since the last time the Flames and Sabres met. That wasn't the case on Wednesday, as he allowed four goals before the halfway point of the second period. After the Flames made it 4-0 Johnson was pulled and Robin Lehner came in for relief.

Of the four he allowed, you'd have to figure Johnson would like at least two of them back [second and third goals]. Despite his struggles, it's hard to put all the blame on Johnson when you consider how terribly the Sabres were outshot in the first 25 minutes of the game. Even with the loss on Wednesday, Johnson has won five of his last seven starts.

As stated above, it took the Flames less than six minutes to score their first goal. They scored their second of the evening exactly three minutes later. From the start, you could tell the Sabres were flat and their opponent was anything but.

At the end of the first period, Calgary had nearly three times as many shots as Buffalo, finishing with a 17-6 advantage. In the second period, the Sabres closed the shot gap, but not by much, and still had 14 fewer shots than their opponent. Aside from their attempts with the man advantage the Sabres didn't generate any true scoring chances and showed why they have the second fewest goals in the NHL.

You can count on one hand how many times Flames goaltender David Rittich was truly tested. It's hard to comprehend how little pressure the Sabres generated when only two days earlier they took advantage of bounces in their favor generated off getting pucks to the net. Poor Rittich was just 17 seconds away from his first career shutout.

It's hard to say that anyone played well for the Sabres on Wednesday but I once again thought that Brendan Guhle and Casey Nelson held their own. Both were on the ice for two goals against but neither deserves a ton of blame for the goals that were scored.

That said, don't be surprised if this is the last time we see Guhle with the Sabres this year. The Amerks are back in action on Friday and with only 14 games left on the schedule for the Sabres, Jason Botterill will likely want him getting big-time minutes in Rochester as they prepare for the playoffs. Barring an injury or huge drop off in production, Guhle should make the Sabres out of training camp next season.

Could it have been any worse?

Probably, but Wednesday is right up there with the Sabres worst efforts of the year. They applied almost no pressure and spent most of the game at their own end of the ice. From start to finish the Sabres were flat and their opponent took advantage of it.