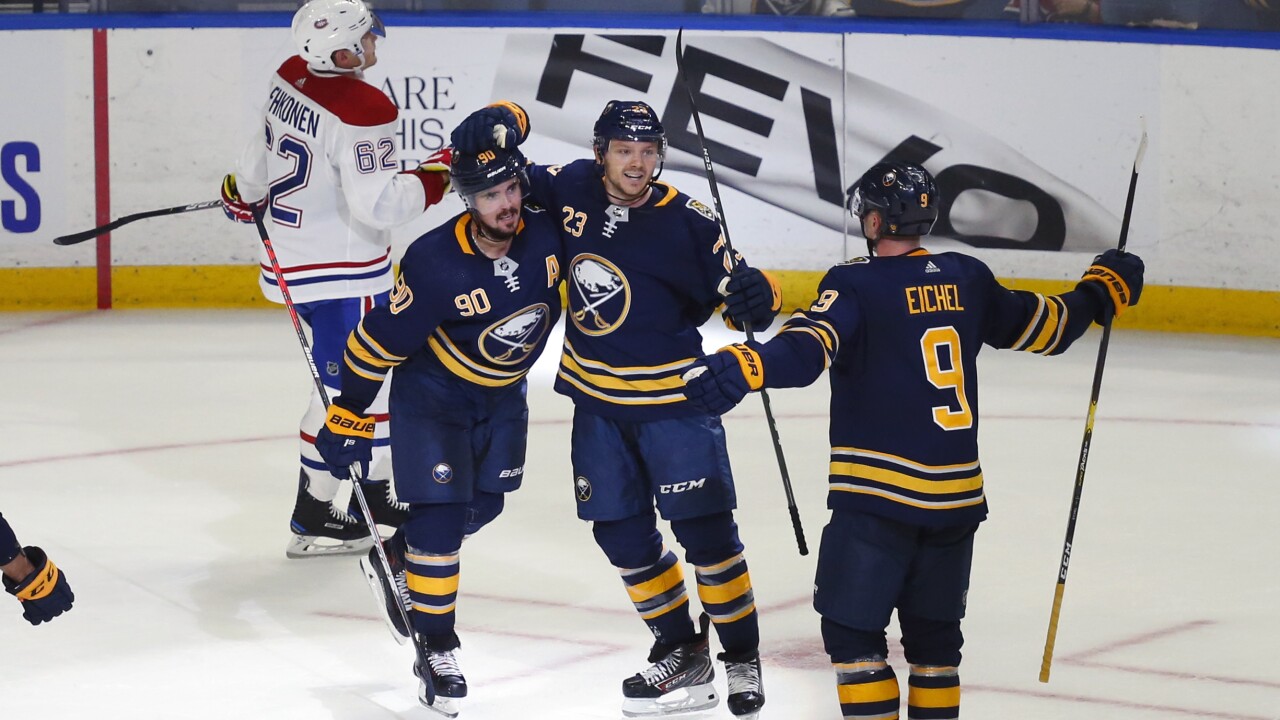 BUFFALO, N.Y. (WKBW) — Marcus Johansson scored the game-winning goal in overtime to lift the Sabres to a 5-4 win over the Montreal Canadiens on Wednesday evening. Jack Eichel finished with two goals and two assists as the Sabres improve to 3-0-1 on the season.

Jack Eichel took over this game in the second period. He scored twice, hit the post twice, and had a perfect pass to Jeff Skinner that should've resulted in a goal. He finished the game with a whopping four points and was the best player on the ice from start to finish.

"There were some good and things we still need to work on," Eichel said after the game. "It's a divisional opponent and we got two points so it's a good win."

"Well what he did tonight is not surprising for me because I've been watching it since the 13th of September," head coach Ralph Krueger said after the game. "Jack is one of the very elite players in the league. His game isn't even near complete. So I'm just really excited to be coaching a player with that skill set and I'm going to work hard every day to try and help him get better."

Jack Eichel [2G, 2A] after the game on the importance of bouncing back with a win #Sabres @WKBW pic.twitter.com/F4JrI2cejJ

Marcus Johansson is off to a great start with the Sabres and he capped off a great game with the OT winner. While the goal will be what most fans talk about, Johansson created several great scoring chances all game long and set up Skinner's goal in the third period perfectly. After the win, Johansson said it's good to be rewarded with a win but he still believes he has a long way to go personally.

"We don't care about before or anything....this is us know" pic.twitter.com/OiAbbHusnB

"You can just see he's starting to get comfortable and he's another player we're excited to see," Krueger said of Johansson.

With his goal and assist on Wednesday, Johansson now has four points in four games.

Krueger has said he doesn't like to number his lines. But the line that most of us will refer to as "the fourth line" featuring Zemgus Girgensons, Johan Larsson and Kyle Okposo once had a very strong game. It felt like every time they were on the ice the Sabres were in the Canadiens' zone. It's nice to see the Sabres get some contributions from the bottom of the lineup but the "third line" featuring Jimmy Vesey, Casey Mittelstadt, and Evan Rodrigues was once again absent. Besides one nice play from Mittelstadt to Vesey, it seems like this line has struggled the most and their ice time reflects that.

When the well goes dry

Eventually, the Sabres are going to need to stop relying so much on their power play. As a unit, it appears to be the most dangerous combination the Sabres have had in years. But most games are won by the team that controls 5-on-5 play. Don't get me wrong, it's super encouraging how successful the Sabres have been with the man advantage. But at some point, the power play won't click and the Sabres will need more production during even-strength play.

It's hard to fathom how a goaltender can stop Olofsson when he's set up in his office waiting for a one-timer. Eventually, teams will adjust but nobody will ever be able to completely take away Olofsson's shooting lane with hid quick release and pinpoint accuracy. Buckle up Sabres fans, Olofsson is the real deal.

Olofsson has six goals in the NHL, all of which have come on the power play. Only fourth other players in league history have done the same thing @WKBW #Sabres pic.twitter.com/SHdXUUkhnl