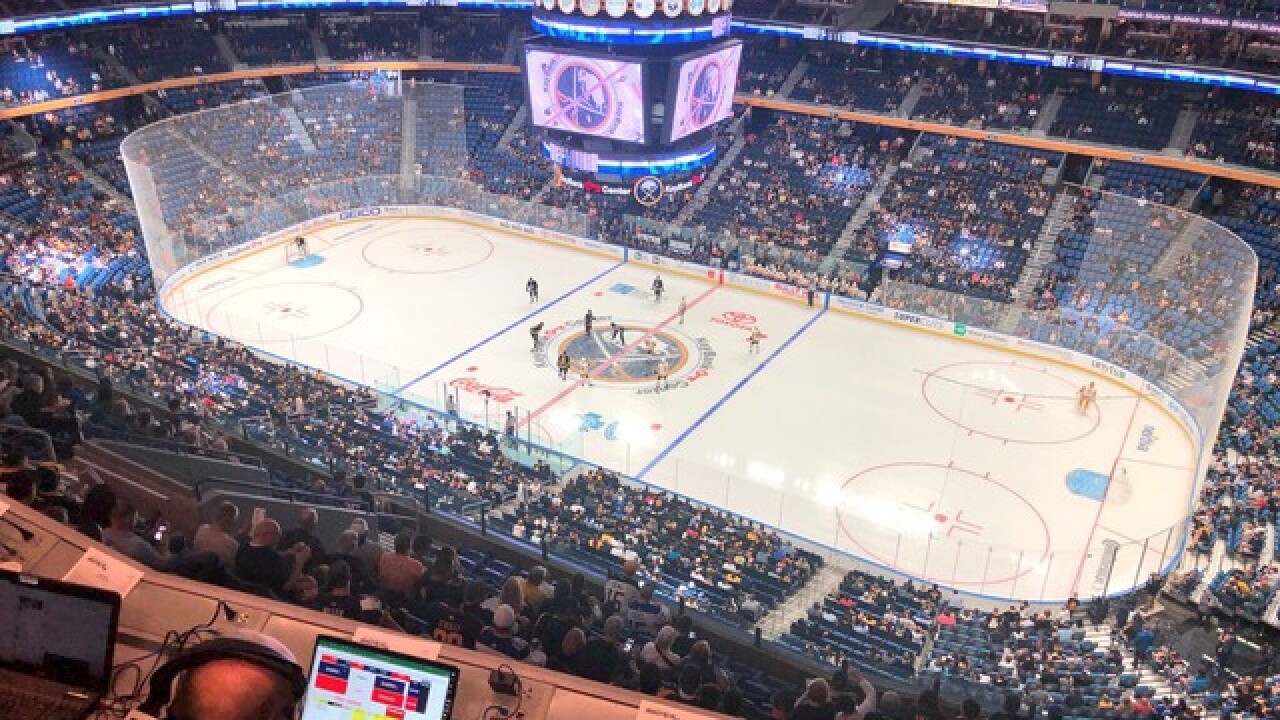 Copyright 2018 Scripps Media, Inc. All rights reserved. This material may not be published, broadcast, rewritten, or redistributed.
<p>Vladimir Sobotka, Jake McCabe and Jack Eichel score for Sabres en route to a 3-2 win at KeyBank Center</p>

At long last, Rasmus Dahlin made his KeyBank Center debut as a member of the Buffalo Sabres. All eyes were on the Swedish sensation as the Sabres opened the home portion of their preseason schedule with a 3-2 win over the Pittsburgh Penguins on Tuesday. Vladimir Sobotka, Jake McCabe and Jack Eichel scored the goals for the Sabres while Carter Hutton turned away all 14 shots he faced.

Take everything from Tuesday with a grain of salt

If the casual fan looked at the Penguins roster on Tuesday they could probably only name one or two players. Meanwhile, the Sabres hit the ice with Jack Eichel, Jeff Skinner, Casey Mittelstadt, Rasmus Ristolainen and Dahlin, along with some other proven NHL veterans. Moral of the story -- the Sabres were supposed to dominate Tuesday's game and they did. Buffalo controlled play at both ends of the ice and that's, of course, a good thing. But it would've been concerning if they hadn't.

At times Rasmus Dahlin will do things that amaze you. But there will also be plenty of mistakes. As we head into the regular season try and remember that Dahlin is still a kid adjusting to the NHL.

On Tuesday there were plenty of flashes from Dahlin but there were also mistakes. In the first period, Dahlin brought fans out of their seats as he pulled a nifty move around Pens center Dominik Simon at the blue line. The play resulted in a scoring chance but could've very easily been a turnover at the line and led to an odd-man rush. This is just one example of his brilliance that will also lead to mistakes. That said, I have absolutely no issue with the occasional error. With his skill set more often than not, he'll be able to pull off the move.

While there was a lot to like about the rookie the most noticeable thing was how crisp he passes the puck. It seems like every time he fires a pass it hits his teammates perfectly in stride. If you've watched the Sabres at any point in the last few years you know that passing has been a huge issue. Dahlin will help that immensely.

Overall it was a solid preseason debut for Dahlin. One thing is clear -- the best is yet to come.

For my money, Evan Rodrigues and CJ Smith were two of the most impactful players on Tuesday night. In the first period, Smith was all over the place creating chances for himself and his teammates. After the first frame, Rodrigues was awesome and picked up the primary assist on McCabe's goal after sending a nice pass to the front of the net.

While Rodrigues is virtually a lock to make the team, Smith now has a golden opportunity to find himself on the opening night roster. With newly acquired Conor Sheary week-to-week with an upper-body injury the Sabres will need options down the left-side after Skinner. While no jobs were won against the Penguins, Smith is off to a good start.

Hutton perfect in the paint

Dahlin and Skinner overshadowed the fact the Sabres new starting goaltender made his preseason debut. Carter Hutton played only two periods but was perfect against the Penguins, turning away all 14 of their shots. With the noticeable difference in talent between the two teams, Hutton was rarely tested. But when he was, he stepped up the task.

Scott Wedgewood, who will likely be the starter in Rochester this season, let two goals squeak by in a matter of minutes to pull the Penguins within one.

Did you think we wouldn't talk about Eichel? His shorthanded goal in the second period was a thing of beauty as he flew by two opponents and beat Pens goaltender Casey DeSmith with a pretty forehand-backhand move. Despite the small sample size, I'd be completely okay if Eichel didn't play again until the regular season. He has nothing left to prove and already looks ready to go. Better to be safe than sorry, at least if you ask me.