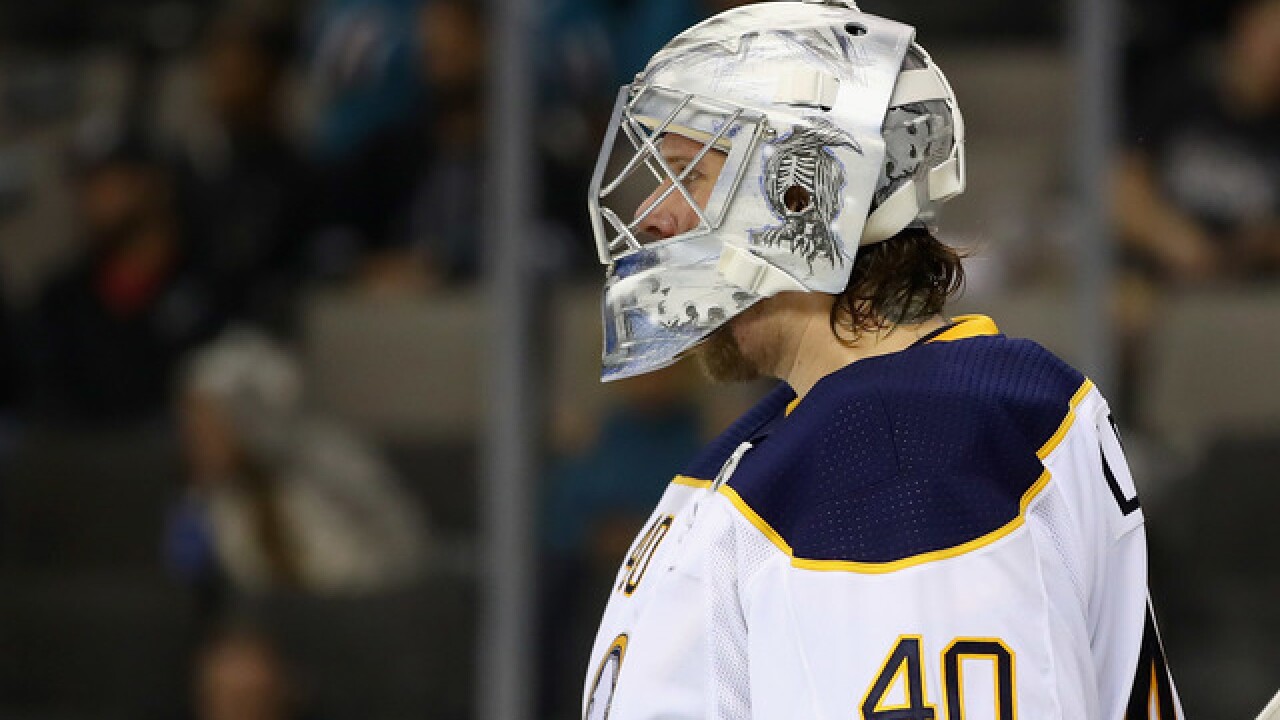 Copyright 2017 Scripps Media, Inc. All rights reserved. This material may not be published, broadcast, rewritten, or redistributed.
Ezra Shaw
<p>SAN JOSE, CA - OCTOBER 12: Robin Lehner #40 of the Buffalo Sabres in action against the San Jose Sharks at SAP Center on October 12, 2017 in San Jose, California. (Photo by Ezra Shaw/Getty Images)</p>

For the second time this week the Buffalo Sabres lost to the Washington Capitals, this time falling 5-1 in their final meeting of the season.

Evander Kane stole the spotlight on Saturday and he didn't even play. With Kane sitting out against the Capitals, there are almost no doubts that he'll be moved before Monday's deadline. What has been inevitable since the start of the season is now all but a certainty.

The question now becomes where he'll be dealt and for what in return? Maybe we'll find out Sunday, perhaps Monday morning or right at 3 o'clock as the deadline hits. Buckle up, this might be the most enjoyable part of the season based off how things have gone so far.

I'd be floored if Kane plays tomorrow night against the Bruins -- why would he? But with Robin Lehner getting the nod against the Capitals on Saturday there is a chance he has played his last game with the Sabres. Lehner won't be as hot of a commodity as Kane and the chances he gets dealt are much slimmer, but you never know? The same can be said for players like Josh Gorges, Benoit Pouliot, Zemgus Girgensons, the list goes on and on.

With Eichel sidelined and Kane out of the lineup the Sabres were without arguably their two most prolific goal scorers. Despite their absence the Sabres generated a few chances, but clearly not enough. In the Sabres last five games they have only ten goals. That's almost never going to get the job done.

Let's not sugarcoat this -- there is a reason the Capitals are where they are in the standings and a reason why the Sabres have sat in the basement of the Eastern Conference all year. On Saturday it was evident that the team with Alex Ovechkin, Nick Backstrom, TJ Oshie, John Carlson and Evgeny Kuznetsov had more talent on the ice. Their first goal of the evening came because the Caps were ready to play right from the start. Their second goal was a result of pure speed. Two areas where the Sabres have struggled....and the Capitals took advantage.

And how does Alex Ovechkin always get so open? Along with his absolute cannon of a shot and tenacity, this is one of the biggest reasons he's flirting with 600 career goals.

After a scorching hot start to the season Jason Pominville has seen a massive drop-off in production. On Saturday against the Capitals he struggled, as did many of his teammates, but it makes you wonder what the Sabres are going to do with Pominville moving forward? He has only three goals in his last 49 games and only one goal since December 10th.

Pominville is under contract for one more season and will make $5M ($5.6M cap hit). He's an outstanding veteran leader and is usually pretty responsible in his own end but this is just looking like another bad contract the Sabres will deal with moving forward.