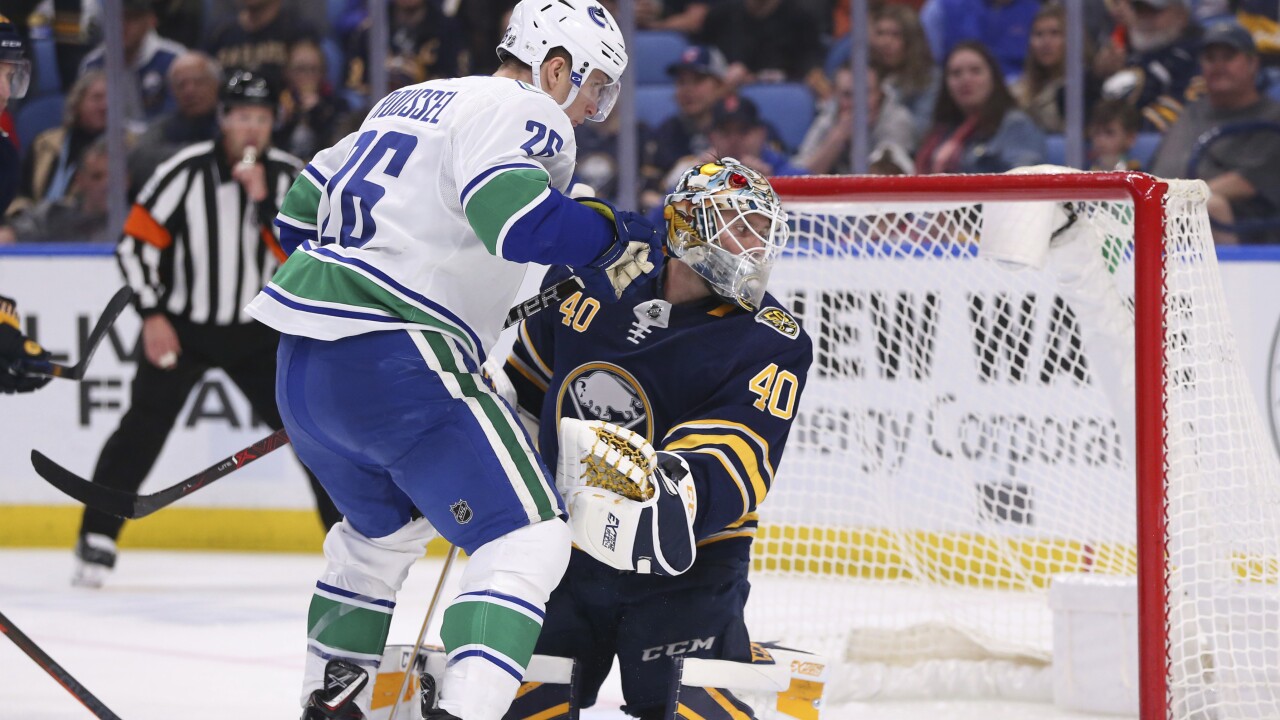 BUFFALO, N.Y. (WKBW) — After 40 minutes the Buffalo Sabres and Vancouver Canucks were tied at 2. That quickly changed as the third period began and the wheels fell off, as the Sabres watched a tie game become a 6-3 loss.

"Those things can't happen," defenseman Brandon Montour added. "It's 2-2 going into the third so we need to bear down and find a way to win those games."

Carter Hutton has now allowed four or more goals in seven of his last eight starts. To put all the blame on the Sabres netminder would be unfair and unwarranted and after the game, his coach agreed.

"This definitely doesn't go on Carter Hutton," Krueger said after the loss.

On Saturday afternoon Hutton received very little help from his teammates, who were often scrambling in front of him to try and contain the Canucks. Several of Vancouver's goals were a direct result of players left wide open.

The defense was sloppy and Vancouver made the Sabres pay. It will be interesting to see when the Sabres will go back to Hutton -- who started his first game since Dec. 19 on Saturday. He certainly could've been better -- but don't put this loss entirely on him.

My Twitter account has been an Evan Rodrigues stan for a few years. I've made it known that I think he's a valuable bottom-six contributor and should have a role on this team.

On Saturday Rodrigues returned to the Sabres' lineup for the first time since reportedly requesting a trade in late December. It was a big opportunity for him to make a statement and he came up short.

Instead, he was served up a perfect pass in front of the net in the second period and missed high and wide. It's a play I'm sure Rodrigues would like to have back. But with his recent struggles and limited role, it was a play Rodrigues needed to make.

One of the only impressive things about today's game from a Sabres standpoint was the play of their special teams.

On the power play the Sabres finished 1-of-3 on the afternoon but their first goal [that was scored at even strength] was a direct result of solid pressure that continued after the man advantage had expired. The Sabres' second goal came on a pretty play where Rasmus Dahlin set up Sam Reinhart perfectly.

While shorthanded the Sabres also had some success, eliminating shooting lanes and keeping the Canucks at bay. Hey, we're trying to find something to be positive about here.

Usually, I don't buy into the cliches about forgetting about a bad performance and shifting focus to the next game. But with a matchup against Detroit Sunday at 5:00 p.m. the Sabres should practice what they preach. Detroit isn't a very good team and the Sabres should be able to bounce back against the worst team in the Eastern Conference. For some perspective, the Red Wings have just 27 points this season. The Sabres, who are also one of the worst teams in the conference, have 45. So yeah, Detroit is pretty bad.