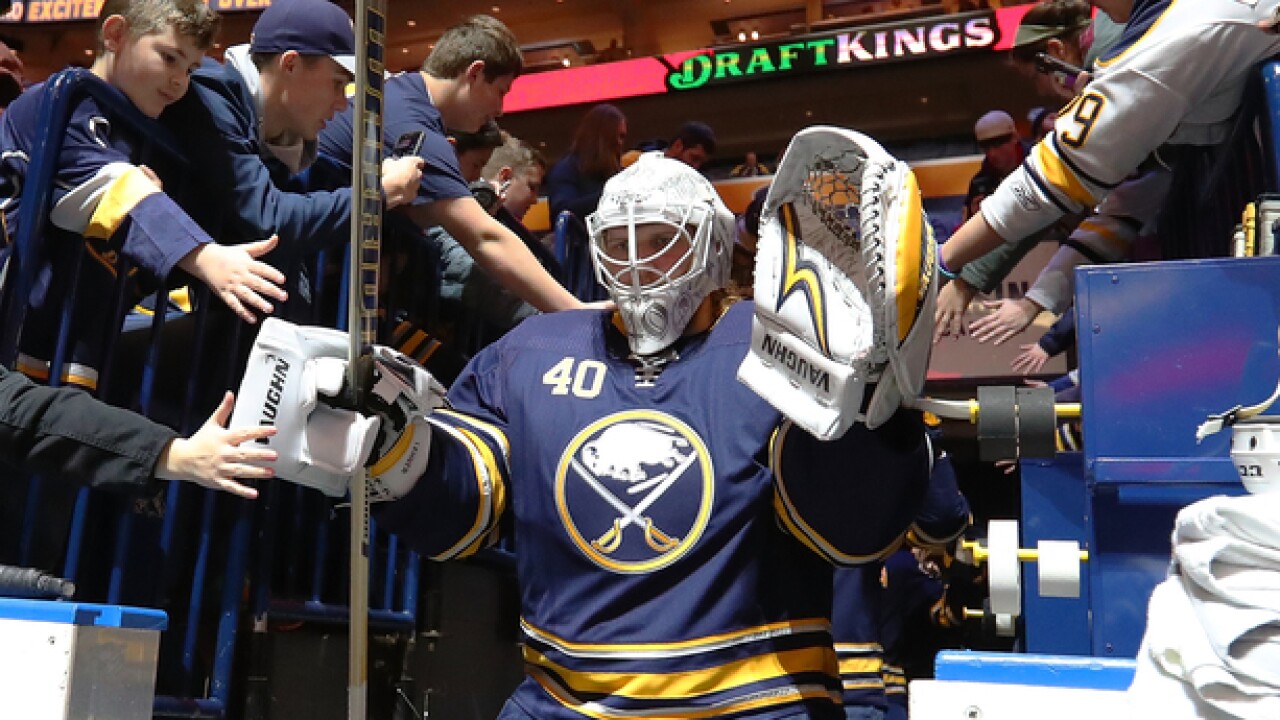 Copyright 2018 Scripps Media, Inc. All rights reserved. This material may not be published, broadcast, rewritten, or redistributed.
Kevin Hoffman
<p>BUFFALO, NY - JANUARY 9: Robin Lehner #40 of the Buffalo Sabres in play against the Winnipeg Jets at the KeyBank Center on January 9, 2018 in Buffalo, New York. The Jets beat the Sabres 7-4. (Photo by Kevin Hoffman/Getty Images)</p>

How do you follow up a three-game win streak? With a three-game losing streak, of course! On Saturday the Buffalo Sabres lost their third straight, falling to the St. Louis Blues 1-0. With their loss, the Sabres fall to 14-29-9 on the season.

Too little, too late

With just seconds left the Sabres needed a goal and came within inches as Rasmus Ristolainen clanked one off the post. Seconds earlier Sam Reinhart came equally close, missing a golden opportunity to tie things up. The Sabres had their chances but couldn't the job done, almost perfectly summarizing the season.

Robin Lehner has allowed three goals in his last four starts. In those games, the Sabres are only 2-2. Lehner has and will continue to receive an unfair amount of criticism but what else is he supposed to do? Against the Blues, Lehner was perfect until Carl Gunnarsson floated a wrist-shot through traffic, off the cross-bar and in. On a night when Lehner needed to be perfect to give his team a chance he was pretty darn close. It's hard to win games when the team in front of you can't score a goal.

Robin Lehner single-handedly keeping the #Sabres in this game

Getting pucks to the net

"When you get pucks to the net, good things happen"

How many times have you heard that said by announcers, coaches or the person sitting next to you? For the third straight game, the Sabres didn't do a good enough job of this.

"If we want to score five on five we need to get pucks to the net," Phil Housley told reporters after the game.

Blues goaltender Carter Hutton deserves a ton of credit for playing a solid game but he was never really challenged until the second half of the final period. Looking back on the game, I don't remember any Grade A scoring chances for the Sabres until their third power play of the night when they had six shots. More of this early on would've gone a long way. Buffalo pushed but it wasn't enough.

By now you probably know that Jack Eichel makes the players around him better. For much of the season, Evander Kane has benefited from Eichel's creativity and skill. After some recent struggles, Kane was returned to Eichel's wing earlier in the week in an effort to give the team a spark.

But the lineup change hasn't resulted in any offense.

Since the Kane-Eichel-Okposo line was put together prior to Thursday's game against the Flordia Panthers, the trio has failed to score a goal. They've had plenty of chances, they just can't find the back of the net. Kane, specifically, has had some glorious opportunities, only to be turned away by Harri Sateri on Thursday and Carter Hutton on Saturday. Kane now has only one point in the Sabres last 12 games and hasn't scored a goal since December 22.

After mentioning how scarce the crowd was at Thursday's game against the Panthers it should be noted that Saturday's attendance was much, much better. Although the lower bowl was pretty scarce at the start of the game, most seats were occupied by about the midway point of the first period.

Had a few extra minutes so I recorded a little #Sabres recap just for Twitter. I even managed to slide a Mighty Ducks reference into it. Hope y'all have a great weekend @WKBW https://t.co/LDCL5bpQER pic.twitter.com/LP4AL48Vga