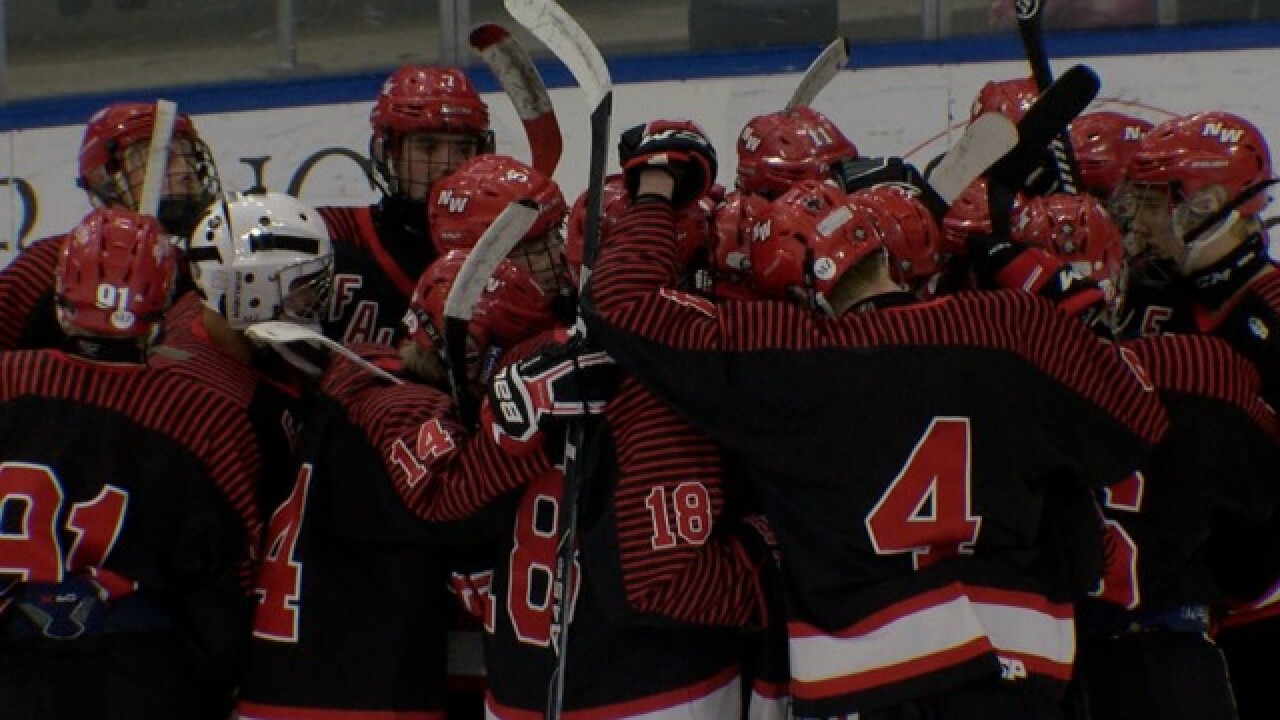 Copyright 2018 Scripps Media, Inc. All rights reserved. This material may not be published, broadcast, rewritten, or redistributed.
<p>Niagara Wheatfield advances to state championship with 4-0 win over North Rockland </p>

Niagara Wheatfield is one win away from their first state title in school history. On Saturday the Falcons knocked off North Rockland 4-0 in the semifinals, securing a spot in the state championship on Sunday.

. @NW_Hockey jumps out to a 1-0 lead thanks to this goal from Nick Peters! Shot at the point taken by Zack Belter #FalconRumble @WKBW @IcingTheFed pic.twitter.com/CJjWQRwdc8

N.W. jumped out to a lead in the final minutes of the first period, as Zack Belter's shot from the point was redirected by Nick Peters. In the second period, the Falcons quickly turned their 1-0 lead into a 3-0 lead, thanks to goals from Nick Breier and Mike Lotempio. Chace Woods added the Falcons fourth goal in the final frame, connecting on a one-timer. Peyton Siegmann was perfect between the pipes, stopping all 19 shots faced.

"We came out and did what we wanted to do and played the way we wanted to play," Niagara Wheatfield coach Rick Wrazin said.

"Some of us have been playing together since modified," Belter said after the game. "I remember being five, six years old and Wrazin would walk his dog down the street and we all knew we had to pick our game up. It's pretty cool to see how far we've come, hopefully, we can get a win tomorrow."

This week Niagara Wheatfield said goodbye to a classmate. As @NW_Hockey heads to the state championship they admit they have extra motivation to bring home a title @WKBW @IcingTheFed @jennacallari pic.twitter.com/dxL0vVM8Gd

For Niagara Wheatfield the win was bittersweet, coming only days after the sudden death of a classmate.

"It definitely brought them together," Wrazin emotionally said. "They have been a focused group all year and now they have a little more reason to be focused. They all have that in the back of their mind but when they come out its business as usual, but they have a why now."

"The kid was one of my favorite teammates to ever play with," Belter added. "Such a selfless kid, hardworking, came from a good family and we knew we had to get a win for him today and tomorrow."

Niagara Wheatfield will play Victor from Section V (Rochester) in the Division 1 New York State championship at 12:00 p.m. on Sunday at HARBORCENTER.