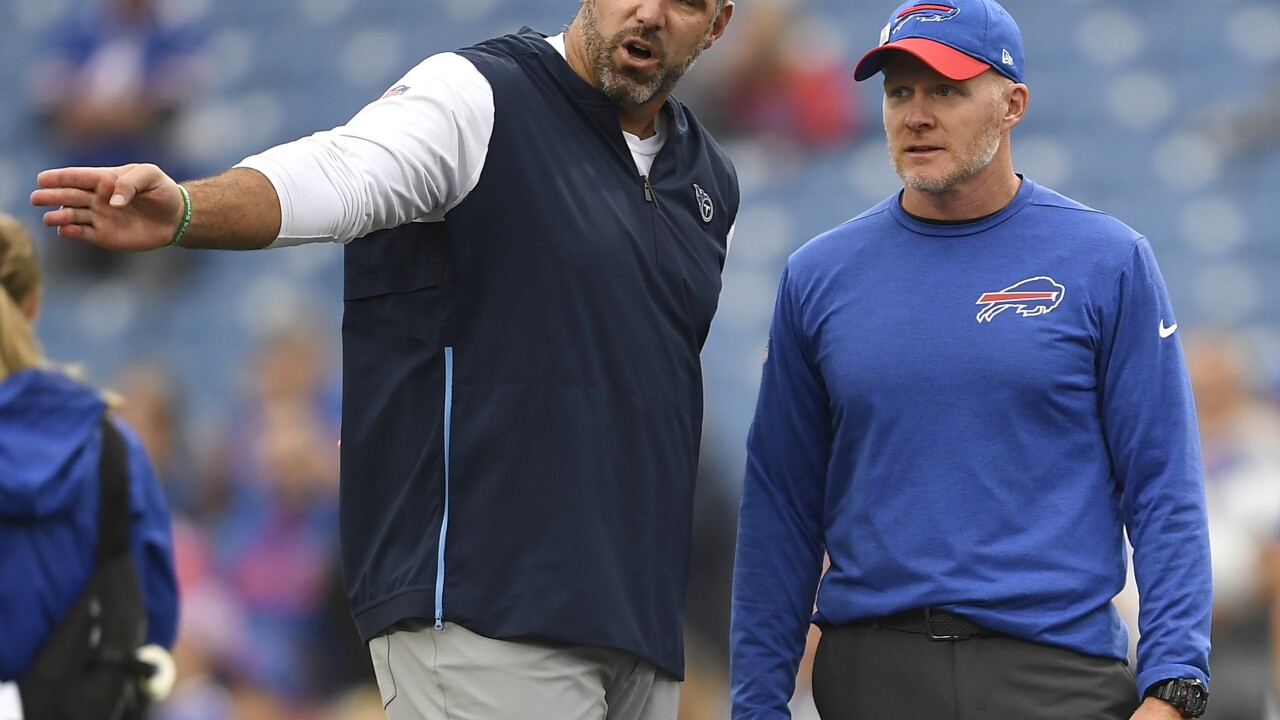 BUFFALO, NY (WKBW) — In the first Tuesday game since 1946, the Buffalo Bills will play the Tennessee Titans in a battle of undefeated teams. The Bills, 4-0, is off to their best start since 2008 and will have to face a 3-0 Titans team that's been off the practice field for the majority of the last two weeks because of positive COVID-19 tests. Can the Bills get their fifth win of the season? Here's what our 7 Eyewitness Sports team thinks:

How was the game against the Las Vegas Raiders just a week ago? It feels like the Bills won their fourth game a month ago, not nine days ago. Yet here we are, after what was a crazy week of ups and downs, the Bills will matchup with the Tennessee Titans in a battle of unbeaten teams.

For the Titans, with little practice the last two weeks, they’ll likely try to hammer the Bills on the ground and win the battle in the trenches. Derrick Henry is the Titans’ most dangerous weapon and he’ll get a big workload on Tuesday [that still sounds so weird]. With injuries to both linebacker Matt Milano and potentially corner back Tre’Davious White, the Bills defense will need to shut down Henry early in the game before he takes over. If they don’t, it could be a long day.

Yet with four games under their belt, the identity of the Bills has become their high-powered offense. 2020 is certainly strange. While Josh Allen has been the star for the Bills offense this season, running back Devin Singletary should get a heavy dose of work against the Titans, who are allowing almost six yards per carry.

I’ve gone back and forth with this pick all week and think it will come down to the wire. A win for the Bills would be massive and would catapult them into their best start since 1991.

The Bills and Titans are playing on a Tuesday night. Welcome to 2020.

It's hard for me to predict this one and it's not just because it's a game between two undefeated teams in week five. It's because we have no idea who will be off the COVID-19 reserve list for the Titans, and what they'll even look like physically after being off the practice field for a lengthy period of time.

I think that's going to be tough for them to overcome, and I also think they're going to rely a lot on running back Derrick Henry and tight end Jonnu Smith (with Humphries and Davis still on the COVID-19 reserve list for now). The Bills defense is a little banged up with Milano out and White questionable, and that could expose some weaknesses within a unit that's been so up and down, but they are better than this Titans offense and should be able to take care of business.

Josh Allen and company shouldn't have a hard time putting points on the board. This Bills team has been able to hold their own during the last two meetings against the Titans, and that was without the weapons they have this year. The offense as a whole has the upper hand on the Titans D in this game and that should prove to be the case early on.

No matter what happens on the field, this could wind up being a much bigger loss for the Bills. I’m not quite sure this game should be played under these circumstances, but at the end of the day the COVID-19 list works out in the Bills’ favor.

All of Ryan Tannehill’s weapons in the passing game are depleted. The only real concern there is Jonnu Smith. This could end up being a game of the running backs. Derrick Henry should get a huge workload, while Devin Singletary has a chance to break out against a Titans defense that’s second worst in the league, and missing Jeffrey Simmons.

The Bills haven’t proven that they can put away anyone this year, but if they can jump out to an early lead, the Titans can’t just pound the rock with Henry when they’re playing from behind.