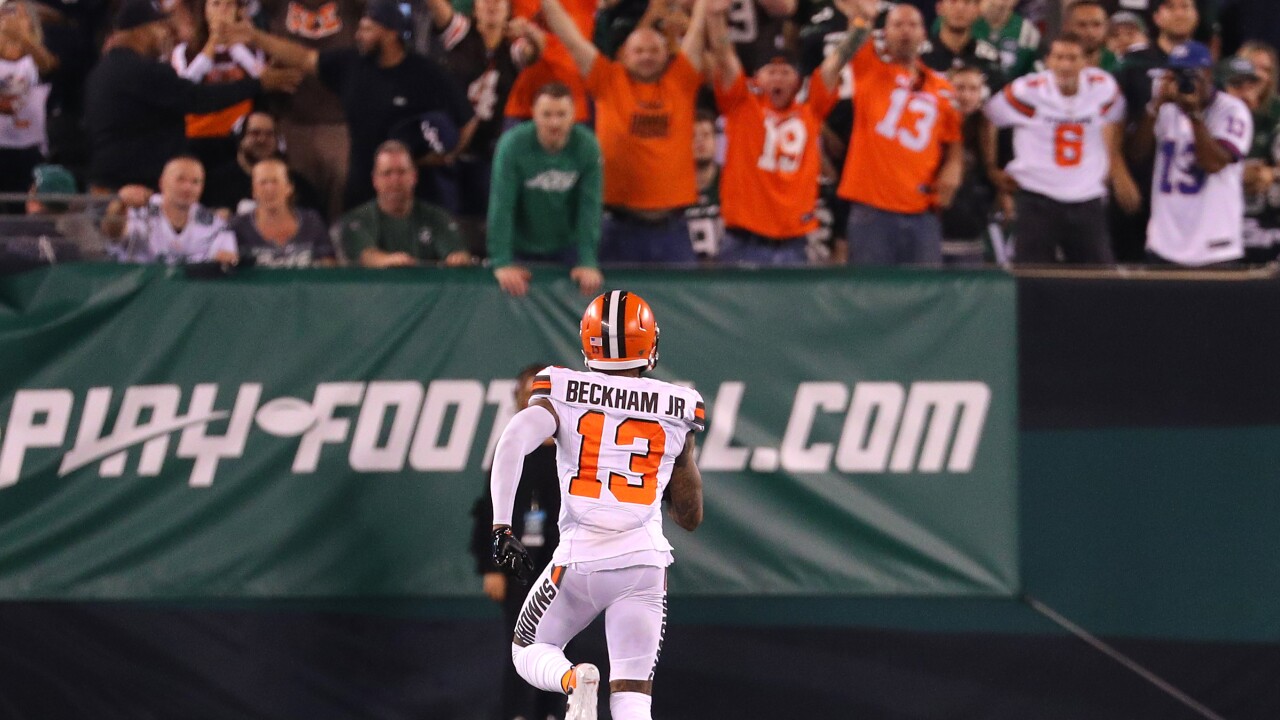 Mike Lawrie/Getty Images
EAST RUTHERFORD, NEW JERSEY - SEPTEMBER 16: Odell Beckham #13 of the Cleveland Browns runs after a reception for an 89 yard touchdown in the third quarter against the New York Jets at MetLife Stadium on September 16, 2019 in East Rutherford, New Jersey. (Photo by Mike Lawrie/Getty Images)

CLEVELAND, OH (WKBW) — For the first time since 1993 the Bills are off to a 6-2 start. But can they get their seventh win against a super talented, yet underperforming Browns team? Here’s what our 7 ABC sports staff thinks:

Times haven’t been so fun in Cleveland this season. After sky high expectations, the Browns have stumbled to a 2-6 start, thanks to undisciplined play and inconsistency on both sides of the ball. But they have to wake up eventually, right?

On offense, the Browns have tons of weapons. Expect a healthy dose of running backs Nick Chubb and Kareem Hunt, who is returning from suspension for his first game of the season. The Bills recent inability to stop the run provides Cleveland with a huge mismatch that can be exploited.

Out wide the Browns have one of the best wide receiver combos in the NFL. Jarvis Landry is a familiar name for the Bills fans and then there is Odell Beckham Jr, who is getting utilized the way he should be. Baker Mayfield said this week they are going to start feeding Beckham, and we could notice that Sunday. Tre’Davious White is going to have his hands full but he’s done a great job in his career handling the best WRs in the league.

For the Bills, Josh Allen has an opportunity to put up some points. Despite an exceptional pass rush led by Myles Garret, the Browns have allowed nearly 26 points a game. If the Bills are going to leave Cleveland with a win, I think they’ll need to flirt with that number. But I’m not convinced they will. I’ve gone back and forth all week with this pick but I think the Browns are due.

I’ve had a hard time settling on a decision for this game and I don’t think I’m the only one. The Browns have so many offensive weapons like OBJ and Jarvis Landry and if one of them gets hot, it can be bad news for the Bills defense. Speaking of the Bills defense, the unit has struggled in three of their last four halves against the run.

I covered Nick Chubb while he played at Georgia and I know how explosive he can be if he gets a gap. The Bills have been saying “gap integrity” in their sleep but I still think it’s going to be an issue this weekend.The Bills offense on the other hand still hasn’t played a complete game.

We’ve seen flashes and plays that give us an idea as to what this unit can be, but they still make mistakes that can’t happen. I’d like to see Devin Singletary get a good chunk of the carries. If he can find some openings, he can definitely be a key factor for the Bills - especially against a Browns defense that’s allowing more than 140 rushing yards a game. I really wouldn’t be surprised if either team won this one but I’m gonna go with my gut and say Singletary will be the difference.

Last week's win over the Redskins was the Bills' first win in which they never trailed. While that might be a positive sign, the Cleveland Browns aren't the easiest team on the schedule.

They've got star power all over both sides of the ball-- Nick Chubb, Jarvis Landry & Odell Beckham, Myles Garrett, and Denzel Ward are a handful of examples. But Cleveland just hasn't put all of the pieces together. The Bills, on the other hand, lack that same star power, but have found their way to one of the best records in the AFC ‪at 6-2.

But like I said, the Browns aren't the Redskins. Or the Dolphins. This defense needs to play like it's capable of playing, or the offense needs to take a step up and bail them out if the Browns' offensive weapons are too much to handle. Buffalo is capable of winning this game. And I think they will. It's just a matter of playing their best game as a team and neutralizing the Browns' star players. The game won't be pretty, but then again, how many Bills games have been pretty so far this season?