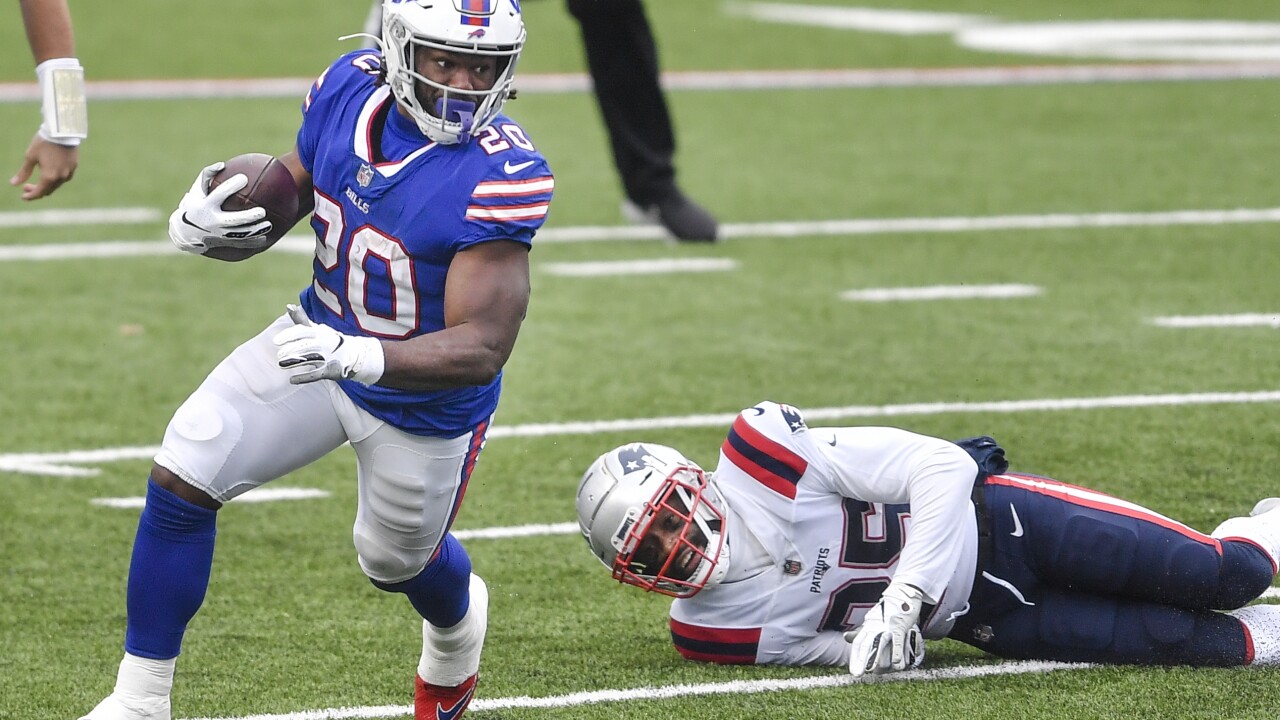 ORCHARD PARK, NY (WKBW) — For the first time this season, the Bills backfield couldn't be stopped.

"It was good getting our guys going. Zack [Moss] and Motor [Devin Singletary] ran the ball extremely well," quarterback Josh Allen said after Sunday's win over the New England Patriots. "Super happy for that and getting the run game going. You see what happens when we have good games like that on the ground, especially in a typical AFC weather game like this. We needed it and our guys responded and stepped up."

Devin Singletary and Zack Moss combined for 167 rushing yards, the most by the running back duo this season. The performance follows weeks of struggles when it came to the ground game.

"Credit to [Brian] Daboll in trusting the O-line even with the shuffling pieces and sticking to the run game," guard Jon Feliciano said.

"At some point, enough is enough," tackle Dion Dawkins added. "We wanted to set our running backs free and I'm just happy to say that we're blessed enough that we went out there and we did it."

Moss, who rushed for 47 yards against the New York Jets last week, rushed for 81 yards that included his first two rushing touchdowns of the season. He became the first Bills running back since LeSean McCoy in 2018 to run for two scores in a single game.

"This is probably the most I felt like myself just from everything from top to bottom," Moss said. "I was just happy I was able to come out and be ready to go in a game like this. I was really comfortable today and want to build off that going into the rest of the year."

Singletary, who's former season-high was 71 yards in the team's win over the LA Rams in week three, rushed for 86 yards on 14 carries. The second-year running back knew this was a game where the team could and would rely on the run.

"All week we knew we were going to run the ball," Singletary said. "We had to get it going because we can't be one-dimensional trying to get to where we want to get to."

The offensive line was especially important when it came to the ground game, not just providing Singletary and Moss with plenty of room, but assisting Moss in his second touchdown. The tandem say guys like Jon Feliciano, who made his season debut after spending the first seven weeks on injured reserve, were huge.

"They did a great job just knocking guys off the ball," Moss said about the play of the O-line. "Me and Motor were really able to get down hill and puncture the defense. There were very few times, if any really, that we were going backward."

"I know what they bring to the table," Singletary added. "The big guys up front were getting a lot of movement, making our jobs easier on the back end."

The Bills, despite their success Sunday, are still sitting near the bottom of the league [29th] when it comes to yards per game [97]. In seven games played, they have just 172 rushing attempts for 679 yards.

The Bills wide receiving corps dominated in the first four games of the season which is a big reason for the team's lack of running, but as the games get harder and the Bills find ways to use and capitalize off the run, we could see more a lot more of it in the future.

"The run game is really important right now to grind these games out late in the season and get these dirty wins," Moss said. "So like I said, this is a good game for us to really show on tape that we can do it consistently."

The Bills offense will go up against a Seattle defense next week that entered week seven allowing an average of 110.5 yards a game.