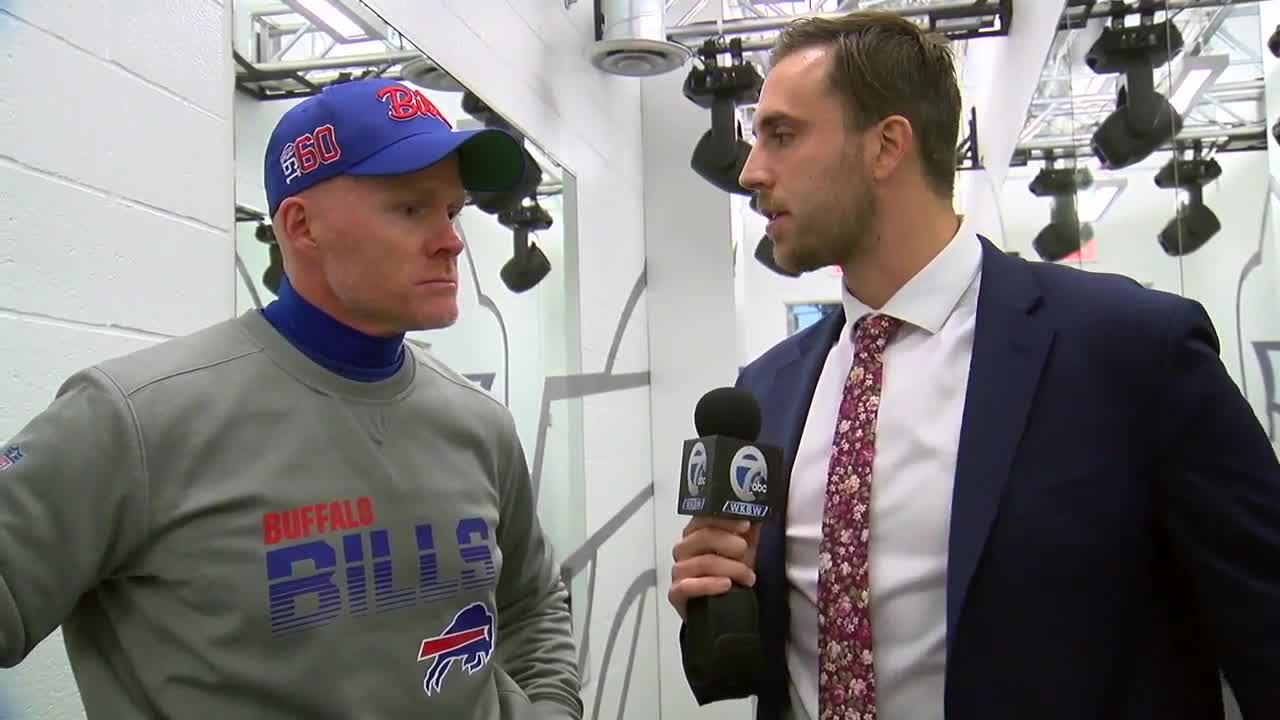 ORCHARD PARK, N.Y. (WKBW) — The Bills' head coach placed the blame on himself after Sunday's loss. Sean McDermott and Matt Bove discuss where things went wrong and where the Bills will go from here.

Matt Bove: Coach, what do you think was the difference between the first half where it was pretty close and the second half where they pulled away?

Sean McDermott: Well it's tough with the turnover. Our turnover before the half, I thought that was a momentum swing. And then they came out and hit a big run on us in the early part of the third quarter that we didn't fit right. That was probably the biggest momentum swing, followed by the pass, after we did get down to score on them, they hit a chunk play on us through the air.

MB: We've talked so many times after these games about how stout your defense has been. Today, that wasn't necessarily the case, especially with the run defense. Where do you think it went wrong?

SM: Well it starts with me doing my job and it goes right down through our entire team of everyone doing their job. And that's a look at the tape, we look squarely at it. We look squarely at ourselves and say what can we do better? The game was won at the line of scrimmage. That's where it starts and then it goes from there. So we need to make sure we're doing that. But at the end of the day, it starts with me.

MB: Is there a concern about the possibility of that becoming a trend because the Dolphins were able to have some success running the ball and then the Eagles obviously did as well today?

SM: Right, I understand why you're bringing that up and we have to make sure that that's not the case. Because to your point, that can become a trend. And that's not healthy for a defense.

MB: Where is the balance between learning from a loss like this and just moving on to next week?

SM: Listen, we don't ever just move on. These guys work hard and they go out there and they play hard and the coaches work hard as well. SO we've got to learn from it. It's a long season, and we'll continue to hang together, and then grow from it as well. This is what that allows us to do; it gives us an opportunity to grow.

MB: I understand that you never want to lose a game in the NFL, but is there something to be said about learning more from a loss rather than a win?

SM: Absolutely. Yeah, it's a great opportunity for us to learn. No one wants to experience what we just had to experience. It's painful. Our guys, they go out there and polay hard every week. But losses are losses, but if you learn from them, they turn out to be things that you can kind of just stand on as the season moves on.

The Bills are back at New Era Field again next week to host the Washington Redskins. Kickoff is at 1:00 p.m.