Next team up: Ravens to visit Bills for divisional round game Saturday night 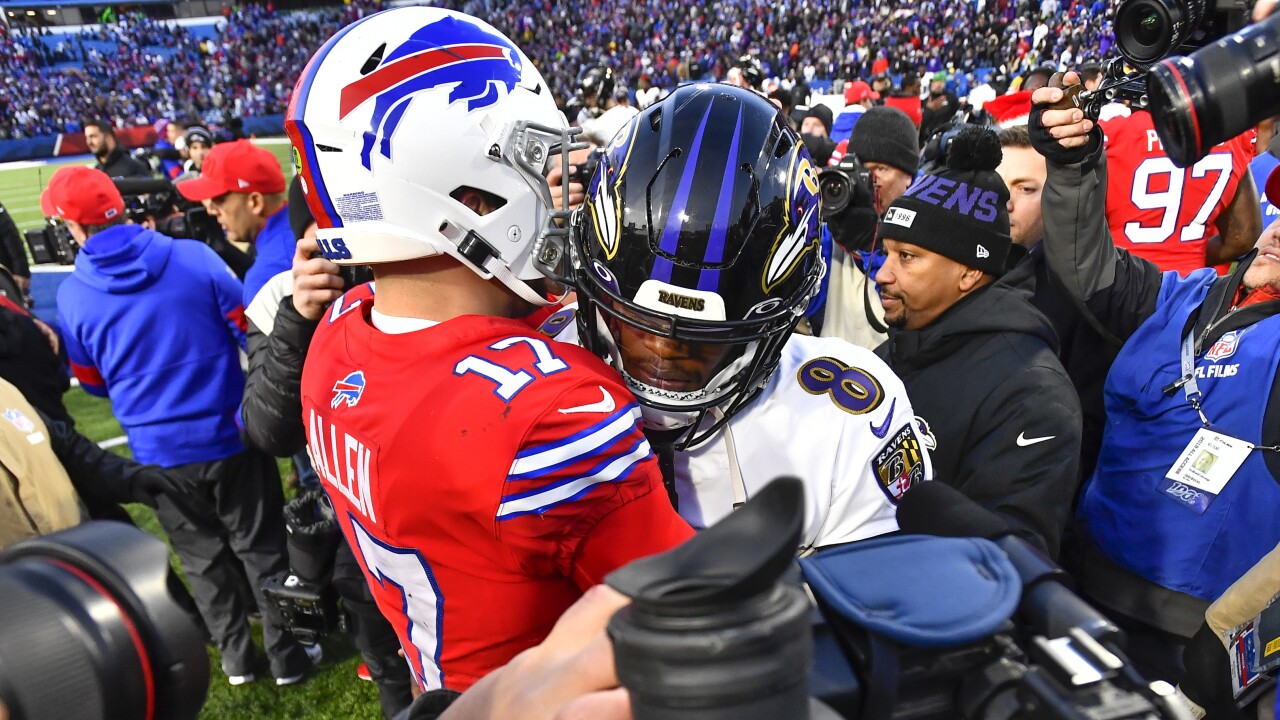 BUFFALO, N.Y. (WKBW) — After beating the Colts to start wild card weekend, the Bills have waited more than 24 hours to find out who they'll host next. Tonight, they finally have their answer: the 11-5 Baltimore Ravens.

The Ravens are one of three AFC North teams to make the playoffs in 2020. Their destination was sealed by a dominant performance by the Cleveland Browns against the Pittsburgh Steelers. The Cleveland will move on to visit the Kansas City Chiefs in the other divisional round matchup.

The last time the Ravens came to Orchard Park, Baltimore came away with a 24-17 victory on December 8, 2019. It was the first time Josh Allen and Lamar Jackson, both of whom were taken in the first round of the 2018 NFL Draft, played against one another.

Neither signal caller surpassed 150 passing yards in the contest. Jackson threw 16/25 for 145 yards and three touchdowns, while Allen had only one score through the air, 146 yards, and a completion percentage below 50%. Allen was also sacked 6 times in the loss.

Buffalo's defense did a good job keeping the ravens. They mustered only 3.6 yards per carry despite averaging 5.5 per tote as a team on the year. The Bills' lackluster offense of old couldn't capitalize on the opportunities given to them, though. That shouldn't be a problem this time around.

The Reigning MVP Comes to Town:

This season, Jackson became the first quarterback ever to rush for over 1,000 yards in multiple seasons. Not even Michael Vick, whom Jackson is regularly compared to, accomplished that feat. But Jackson's numbers fell off across the board in 2020: he's only thrown for 2,757 yards, ran for 1,005 yards, and accounted for ten less total touchdowns this year.

The Bills have the longest active win streak in the NFL at 7 games. The next longest win streaks are owned by the Green Bay Packers and the Baltimore Ravens. The former has a first round bye. The latter is coming off a close playoff win of its own after beating the Tennessee Titans 20-13.

Jackson headlines the Ravens, but there's so much more that makes them dangerous. Their backfield by committee is one of the most dangerous units in the NFL. No matter who carries the ball, they have fresh legs because the Ravens are so deep at running back.

Defensively, they have stars at every level of the field veteran defensive tackle Calais Campbell was named to his fourth straight Pro Bowl a few weeks ago. When he or fellow Pro Bowler Matthew Judon gets after the quarterback, their secondary can capitalize: Marlon Humphrey and Marcus Peters make up one of the best cornerback tandems in football.

It won't be easy with the Ravens come to town on Saturday. But playoff football isn't supposed to be easy. A lot can change in a year, but the Bills' offense has taken a monumental leap forward in 2020. And Buffalo showed they could hang with Baltimore a year ago.

Tune into 7 Eyewitness News on Monday evening to hear from the Bills' coaching staff on what they expect from the Ravens. Our crew will break down everything you need to know about Baltimore at 7:00 p.m. on an all-new, live edition of The Point After. Kickoff in Bills Stadium is on Saturday at 8:15 p.m.