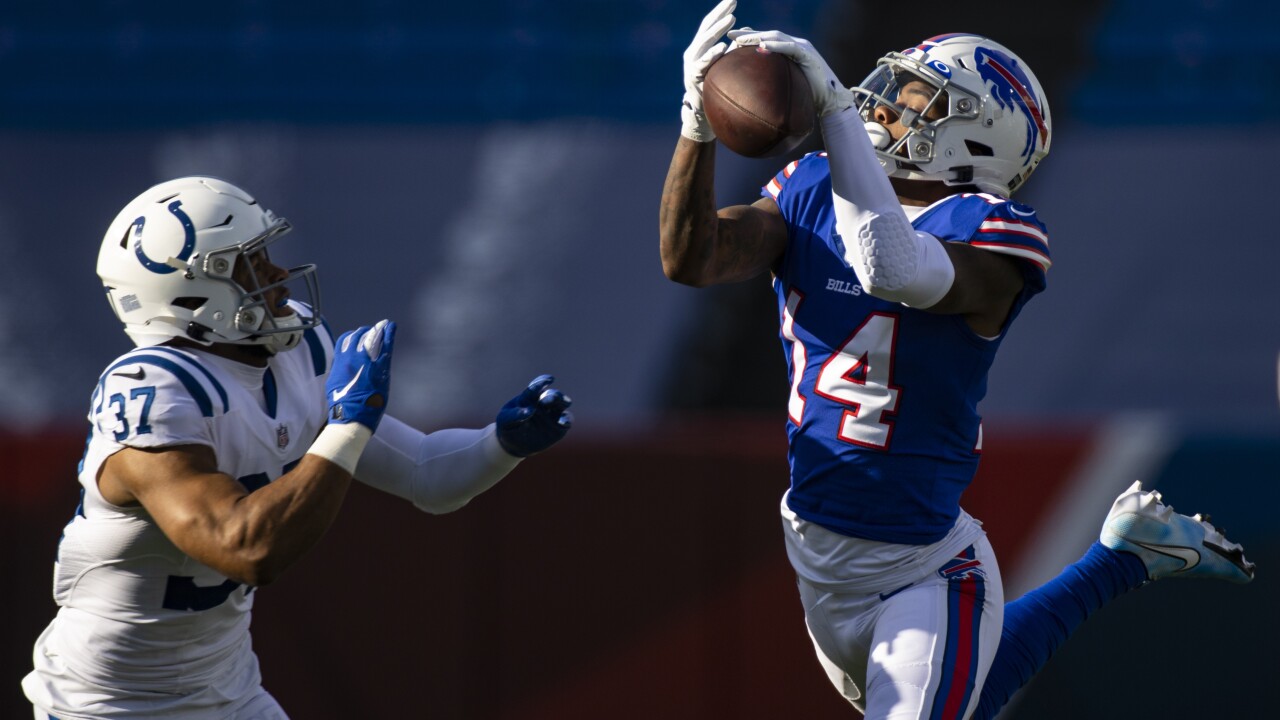 ORCHARD PARK, NY (WKBW) — The Buffalo Bills wide receiver corps has been solid all season and once again, came up big when this team needed them.

"We have so many weapons, it's so hard to defend," Cole Beasley said. "All of these moving parts are working together. We need that to be a good football team offensively."

Stefon Diggs continued to prove his worth, finishing with six catches for 128 yards and a touchdown in the team's 27-24 win. In the process, he became the team's first 100-yard receiver in a playoff game since Eric Moulds in 1999.

"I'm just trying to do my job and earn it," Diggs said. "Josh Allen's a good quarterback. I'm halfway decent [receiver], I can do my job."

Diggs is more than halfway decent and Bills fans will agree. He's been on the receiving end of Allen's touchdown passes nine times this season. His touchdown in the 4th quarter of Saturday's game, was just another example of how well the two play together and a call Allen was hoping coach Brian Daboll would make.

That Allen to Diggs connection. 👌

"I'd been begging for that play for a while. He [Daboll] called it with the perfect opportunity in the perfect situation," Allen said. "[Stefon] saw it all the way in. He just kind of got into the area he wanted to get to, put his hands out at the last second, and made a hell of a play."

Cole Beasley made his return to the field after suffering an injury in the team's win over New England. After missing the Miami game, Beasley returned to the practice field this week and was considered questionable ahead of Saturday's game. He finished with seven catches [on seven targets] for 57 yards.

"Cole is one of those guys that can step up at any given time. He's been making plays all season," Diggs said. "He's a guy that leads by example, even if he was battling an injury. He made a lot of plays."

Rookie Gabriel Davis has been impressive since Training Camp and continues to play like a no. 2 wide receiver, rather than the first-year player he is.

"Big plays, especially for a rookie," coach Sean McDermott said about Davis after the win. "In his first playoff game to make those plays, it shows he's mentally tough and the game isn't too big for him."

"He's been doing it all year so I expect nothing different," Beasley said. "He's done a great job, has a great head on his shoulders, and he's going to continue to do that for us."

Davis finished with four catches for 85 yards. Two of them were impressive snags where he managed to get both feet down before going out of bounds.

"Any opportunity that's thrown at me, I try my best to make a play," Davis said. "I've got a lot of great guys in front of me I'm trying to learn from and I"m just trying to do right by them."