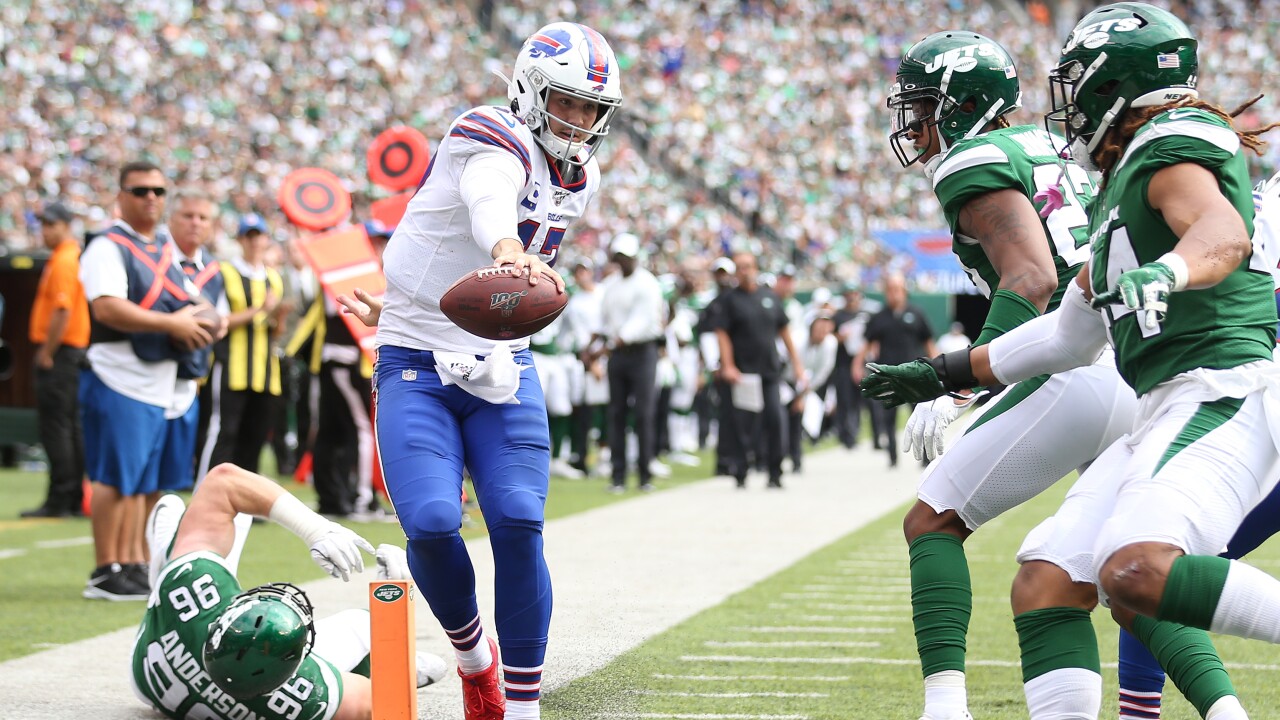 EAST RUTHERFORD, NJ (WKBW) — Josh Allen and his teammates knew things couldn't get any worse after a disastrous first half. Allen threw two interceptions and added two fumbles as the Bills fell behind 6-0 after 30 minutes.

All things considered, it could've been a lot worse.

“I don’t think many teams can turn the ball over four times in the first half and only be down 6-0,” Allen said.

But then it looked like all hope was lost, as the Bills allowed the Jets lone offensive touchdown of the afternoon when Le'Veon Bell caught a pass from second-year quarterback Sam Darnold. After converting on a two-point conversion the one-possession game suddenly became a 16-0 lead for the Jets.

That's when the Bills comeback began.

After the Bills were shut out for nearly the first three quarters, they scored 17 unanswered points with Allen leading the charge.

"We knew we were going to have a shot in the second half," Allen added.

It all started with a field goal from Stephen Hauschka in the dying minutes of the third quarter, which made the game 16-3.

After another stop from the Bills defense, their counterparts on offense responded with their first touchdown of the year, as Allen scrambled for a three-yard touchdown. It capped off an impressive eight-play, 85-yard drive.

Once again the defense came up big and the offense responded with yet another eight-play, 85-yard drive. This time it was John Brown who found the back of the endzone and gave the Bills their first lead of the game with just three minutes to play.

"We continued to fight," Brown told reporters after the game. "We didn't point any fingers. We just kept fighting until the time was up."

"Obviously we wish it was different circumstances in the first half but nobody on our team flinched," Allen added. "We tried to be as calm as possible and that's what we did. We came out and understood the first half is not who we are and just kind of developed a game plan in the second half and we found a way to win."

To say it was a slow start for the Bills second-year signal-caller may be putting it lightly. While not every turnover was Allen's fault, there were also a few errant passes that should've been intercepted by the Jets but weren't. After the game, Allen admitted he has some things to clean up and work to do but said getting the win speaks volumes about his teams' resiliency.

"You know it does a lot. It just kind of implements some confidence in both sides of the ball. When we're called on to do our job we're going to go out there and we're going to execute.

With Josh Allen under center, there is going to be some really good and really bad throws. That's just the way he plays the game. That doesn't mean he can't improve his decision making or clean things up but it means you need to take the good with the bad.

If it weren't for an outstanding performance by the Bills defense things would've likely ended very different. But they gave Allen and his teammates on offense a chance to win and they capitalized.

Josh Allen on what it means to start 2019 off with a win @WKBW #Bills pic.twitter.com/0Hjou9NmgU

It wasn't a great game but Allen played his best when it mattered the most and because of it the Bills will head back to New Jersey in week two with a win under their belts.