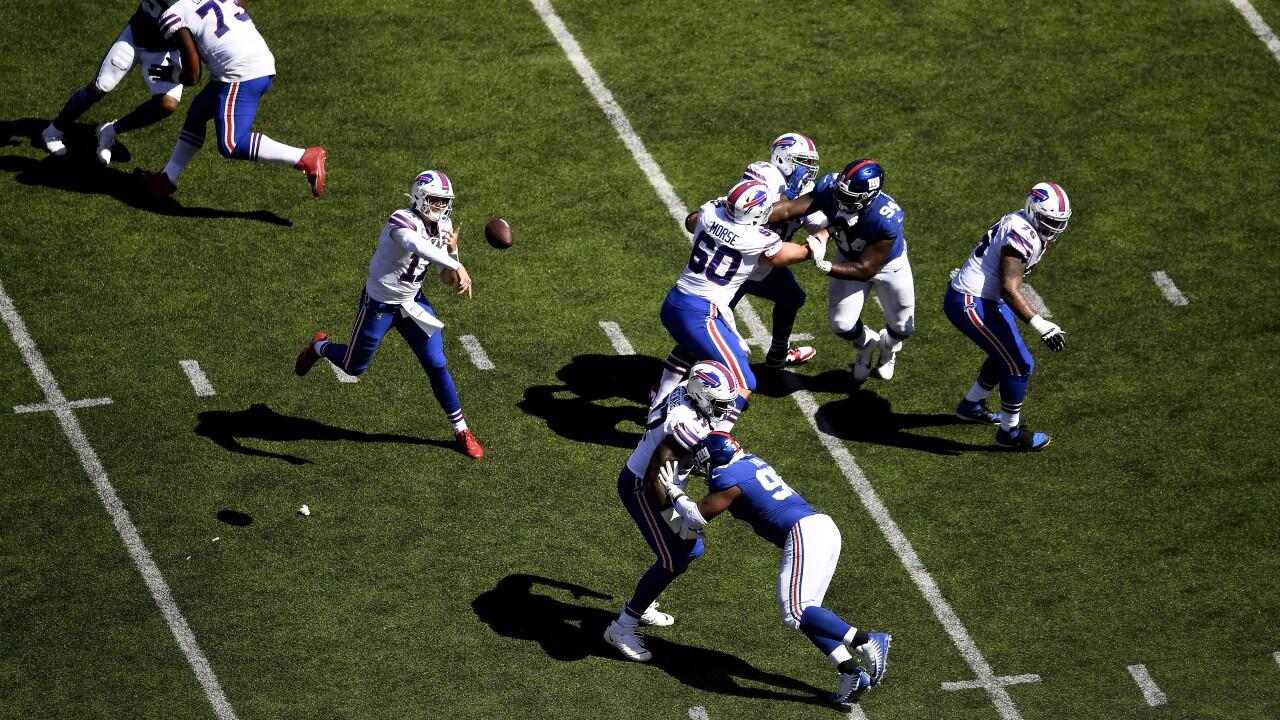 EAST RUTHERFORD, N.J. (WKBW) — On Sunday Josh Allen did something that hasn't been done since 1992. He threw for more than 200 yards passing in his seventh consecutive game.

The last QB to reach that milestone for the Bills?

Against the Giants, it didn't take long for the second-year signal-caller to make a statement. In the first half alone he threw for 210 yards and a touchdown. He also had a rushing touchdown -- which was his 10th in 14 NFL games. Only Cam Newton [11 games] has rushed for 10 touchdowns faster than Allen.

After a sizzling start, Allen slowed down in the second half, finishing with 253 yards passing, 21 yards rushing, and two touchdowns. But it was a strong enough performance to put up 28 points and impress his peers.

"I thought he played a good game," Sean McDermott told 7 ABC after the win. "Overall we're seeing Josh spread the ball around which is healthy and a lot of guys contributed."

McDermott was particularly impressed with the throw Allen made to John Brown on third-down at the 8:23 mark in the fourth quarter. Allen evaded the pass rush, making the defender look like a deer in the headlights. The Bills QB then threw a rope to John Brown for a 23-yard gain and the first-down. It essentially sealed the win for the boys from Buffalo.

"Last week I kind of felt settled down, especially in the second half, so when things kind of start to slow down I tried to have the same thought process when I was out there today," Allen said after the win. "I trust the five guys in front of me, I trust the five guys trying to get open, I trust my eyes and feet, allow them to make some plays and that's what we did today."

New York Giants coach Pat Shurmur had a front-row seat for the afformentioned plays. The Giants coach generated some buzz this week when he said during the 2018 draft process, he believed Allen had the potential to be an NFL starter. Some felt Shurmur was slighting the former No. 7 overall pick. The comments were even posted on the TVs inside the Bills locker room.

"Everybody has their opinion and I know he didn't mean anything like that," Allen said after the game.

"He doesn't need any extra motivation," Bills wideout Cole Beasley added. "He's motivated every week. He's had naysayers from the beginning. It's nothing new for him. I don't even know if he noticed it."

Allen played it off that way after the game. But Shurmur and Allen did briefly chat during pregame warmups. According to Allen, the two were just catching up.

Whether it was motivation or not, Allen proved he's more than just a guy who has a chance to be a starter. He showed flashes of spectacular play and led his team to consecutive road wins to start the season. It wasn't a perfect game but it was a win -- and now the Bills head home with their first 2-0 start since 2014. Next up -- the 0-2 Cincinnati Bengals.