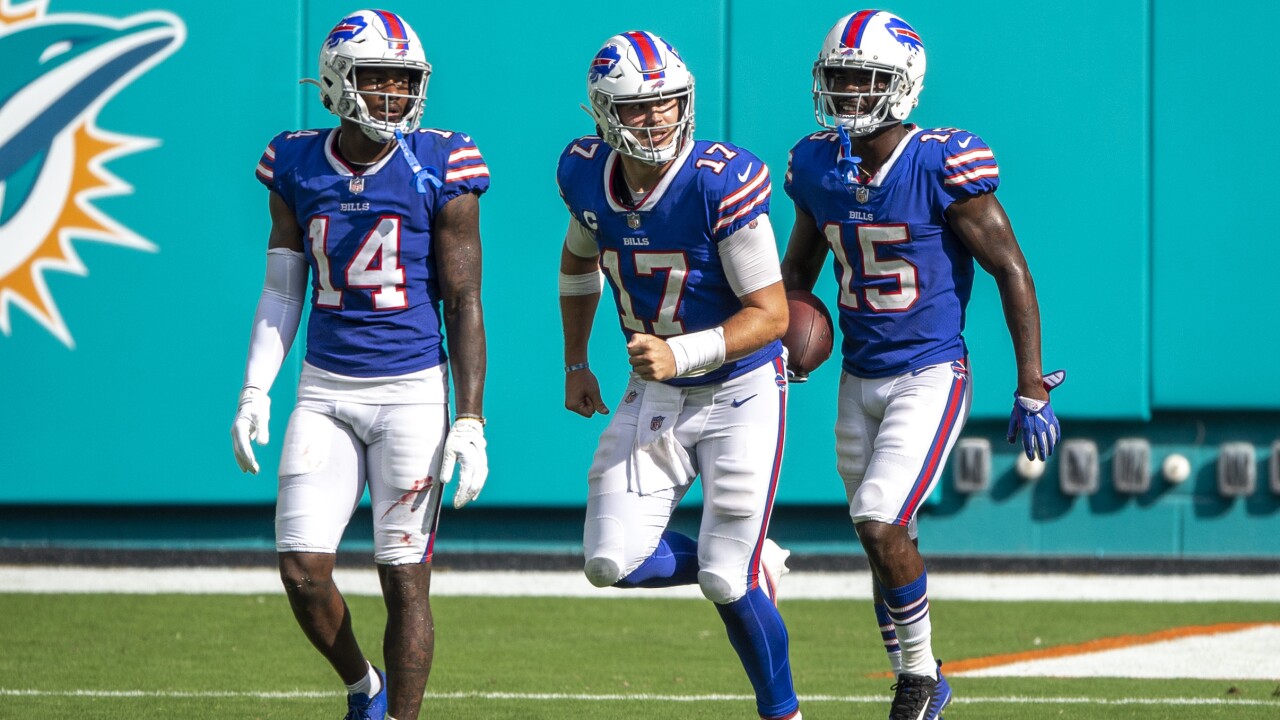 BUFFALO, N.Y. (WKBW) — Bills Mafia had plenty to say on social media after Sunday's win against the Miami Dolphins.

The game not only included a power outage, resulting in Bills fans not being able to watch parts of the first and second quarter on TV, but lightning caused the game to be delayed for over a half an hour.

The final ended up 31-28 in favor of Buffalo, capped off by a career day from Bills quarterback Josh Allen, who threw for four touchdowns and a career-high 417 yards.

Here are some of the best reactions on social media from Bills Mafia.

They day has finally arrived. What an epic day it will be. So proud of you @SnapFlow69 & @bferguson50 We love you and can’t wait to watch your dreams come true today. #WhatAJourney #Bills #Dolphins #BillsMafia #FinsUp pic.twitter.com/TJWeq2UMli

First NFL start, I am so grateful for this time. I will forever be thankful for the trails & tribulations. It’s time to shine! #BillsMafia

Need a smile today? This little voice will melt your heart!

My friend Owen, who we met at Training Camp a few years ago, is more than ready for game day! #BillsMafia @WKBW pic.twitter.com/n8NEEPiwQf

“Technical difficulties”. Not what any #BillsMafia fan wants to hear right now as the Steelers/Broncos game is now being broadcast on TV.

Everyone in #Buffalo right now pic.twitter.com/RRHsbWLcaQ

Is anyone else having technical difficulties? This is the second straight week there's been an issue.

I absolutely love how much fun the Buffalo Bills Twitter team is having with Allen’s mustache https://t.co/syqXc3OKJG

When Stefon Diggs scores a touchdown but you couldn’t see it because Miami had a power outage pic.twitter.com/y7vCipS1DD

McKenzie was just penalized 15-yards for a perfect block

That’s a terrible call! He was going lateral!! Pathetic right there by the officials.

The big reveal. If you guessed it, we’ve got something coming your way! #BillsMafia | #BUFvsMIA pic.twitter.com/WUQIZRQkg0

I’m gonna have to check on this, but I think with everything getting pushed back...tomorrow we all get to go in to work an equal amount of time LATER.

The #Bills in the third quarter every week pic.twitter.com/SOI4G3v7nT

Josh Allen is over 300 yards today, becoming the first Bills QB with back-to-back 300-yard games since Drew Bledsoe in 2002.

Josh Allen needs to win them a game. Plenty of times over the last few years, it's been the defense stepping up big. Today it'll need to be the offense.

I don’t think ppl really understand how good #14 is for the @buffalobills (what an addition to the squad he is) he’s A really REALLY GO👀OD Football player !

Best back to back game by a QB in Bills history!

Momma caught that one! ❤️

Josh Allen is the first player in Bills history with 400 passing yards, 4 passing TDs and 0 INTs in a game. pic.twitter.com/3tw4zvzf7S

So happy for this kid! He's always been so genuine and such a good person since the day he was drafted. He has endured so much hate from both actual media and social media. He has taken it all in stride and never wavered. He deserves all the success in the world!

The Bills look to maintain the AFC East division lead as they take on the Los Angeles Rams in Orchard Park on Sunday.