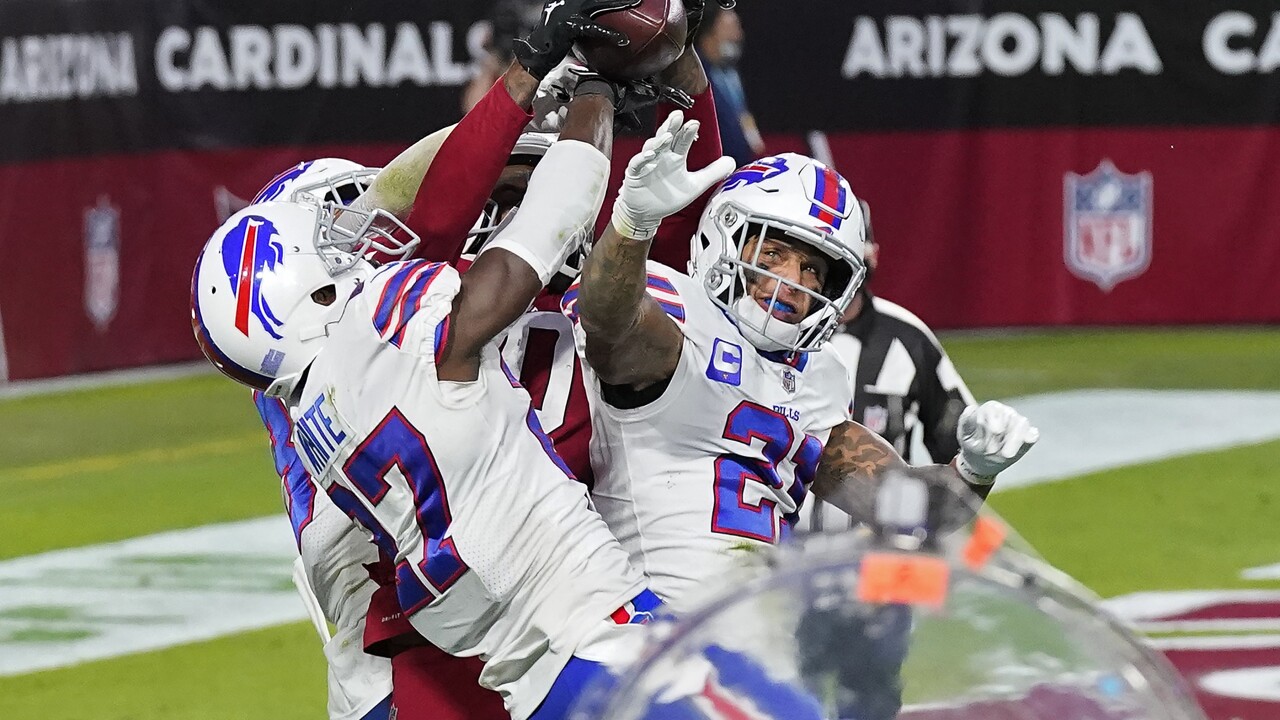 GLENDALE, Ariz. (WKBW) — With 34 seconds to go in Sunday's game against the Cardinals, it looked like the go-ahead touchdown belonged to wide receiver Stefon Diggs. His diving 21-yard touchdown catch gave the Bills their first lead of the fourth quarter.

"Nervousness? No. But it's a 60 minute game," left tackle Dion Dawkins said. "Until that clock shows zeroes, it isn't over. And [the Cardinals] clearly showed that today."

"It's a huge gut punch just because our offense executed," defensive end Jerry Hughes said. "Should've been a game winning drive. Us on defense, we have to do a lot better job of understanding the situation and getting off the field."

And it looked like they were going to. The Cardinals were out of timeouts with 11 seconds to go in the game. Cardinals quarterback Kyler Murray was even in Mario Addison's grasp at one point as he rolled out to his left.

But the defending rookie of the year was able to get away from the pressure and heave one for the end zone.

"The ball was in the air for like ten minutes," safety Micah Hyde said. "And we had [wide receiver DeAndre Hopkins] bracketed from all sides. He just went up in the air first."

Hyde was one of the three Bills surrounding Hopkins in the end zone. The other two were Tre'Davious White and Jordan Poyer. They've been staples in the secondary since the McDermott era began.

"I thought we guarded it pretty well. We had three people around him," safety Jordan Poyer said. "We just have to find a way to make a play."

But Hopkins, quite possibly the best wide receiver in the NFL, came down with the ball to take back the lead for the Cardinals. Arizona took a knee for the PAT with two seconds left on the clock.

"It's a Mike Tyson haymaker. It hurts," Dawkins said. "I've never felt anything like this, but the good thing is I know what this feels like and [now] my teammates do, too."

"Those guys came back and made a big play. And that's like a huge gut punch. It just took the wind out of you," Hughes said. "I've never been on this side of it. It sucks."

Buffalo's offense never even got a chance to answer. The game ended on a lateral going out of bounds as the Bills frantically tried to make something happen on the ensuing kickoff.

"Throughout the game, I put the ball in harm's way too often," Josh Allen said. "It shouldn't have come down to one play. And I take this very personally. You know, two interceptions can't happen. You can't expect to win after turning the ball over."

"There was a lot of plays earlier that got away from us. We gotta take care of the football better," wide receiver Cole Beasley said. "If we play better in those two situations as well, it's probably a very different game."

The Bills have plenty of time to let this one sit as they go into their bye week with a 7-3 record. But hindsight's 20/20, even if there isn't an error in technique or fundamentals.

"It was a weird play, because we were just playing quarters. I was on the left side of the field and saw [Murray] start to roll out, so I started to push my zone," Poyer said. "You just gotta find a way to knock the ball down. That's it."