Fans must choose: the Bills or the Goo Goo Dolls

The Bills game will not be shown at the concert 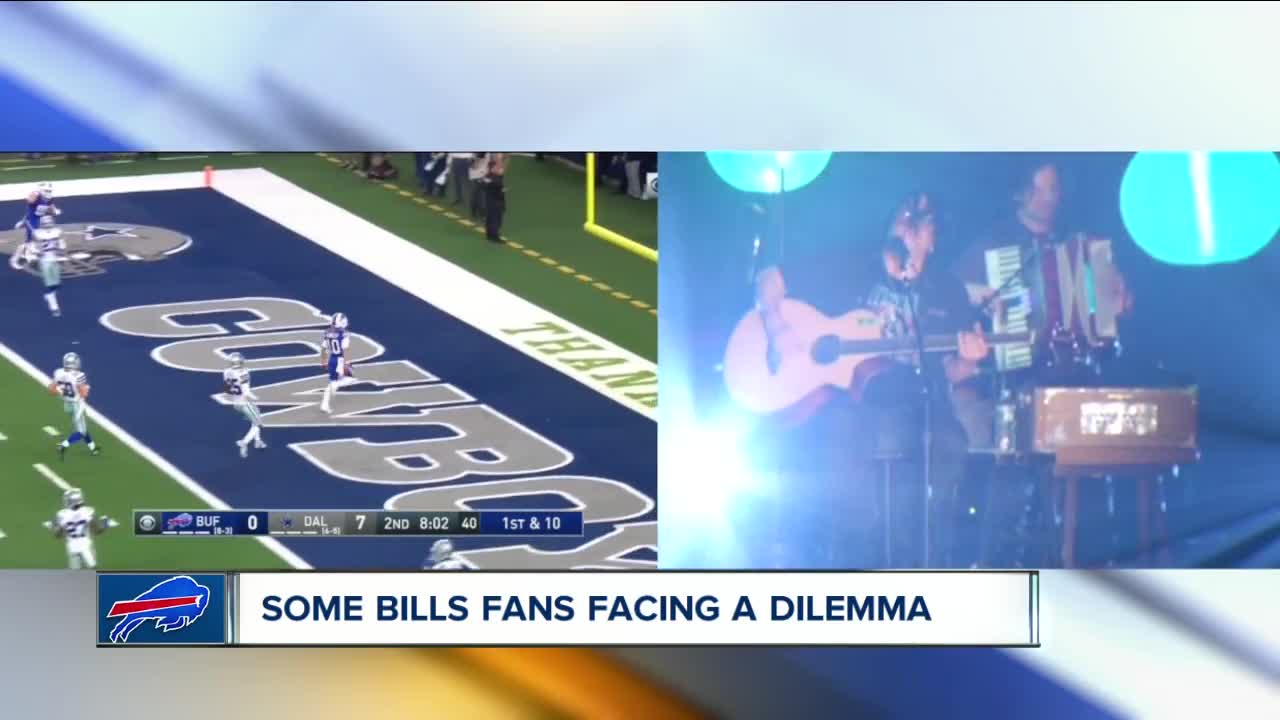 Fans with tickets to the sold out concert now have to make a choice: head to the Goo Goo Dolls show set to start at 7 p.m. or watch the Bills take on the Steelers in prime time at 8:20 p.m.

BUFFALO, N.Y. (WKBW) — Fans with tickets to the sold out concert now have to make a choice: head to the Goo Goo Dolls show set to start at 7 p.m. or watch the Bills take on the Steelers in prime time at 8:20 p.m. This is the first time the Bills will hold a prime time Sunday night spot in 12 years.

"This is the biggest Buffalo problem besides like needing Tim Hortons in a snow storm," Angela Miranda said.

She and her boyfriend bought tickets to the Goo Goo Dolls concert on December 15th at Riverworks in July. The band is headlining Star 102.5's "Deck the Hall Ball." When she found out the game time was flexed, she immediately posted, ready to sell her concert tickets. But now, the two are debating between their two favorite things.

"Our favorite band versus our favorite team," said Joel Jackson. Jackson and Miranda's first date was at a Goo Goo Dolls concert.

"I don't think I've met anyone who claims they weren't at the July 4th concert at City Hall. Everyone claims they were there...," said Miranda. "So everyone is a Goo Goo Dolls fan, everyone's a Bills fan. You know they were all at the snow storm game a few years ago where the guys were just rolling up snowmen."

The situation has this couple in a pickle. They've been dating since 2013.

"Do I sell them? Do I keep them? Are we going to be able to watch this? How do we do both? Do we clone ourselves? What do we do?" Miranda said.

Miranda and Jackson can't seem to agree on which option is bettter.

"The game's more important than the concert," Jackson said.

"Don't tell Joel... I'm going to make him watch [the game] on his phone," said Miranda.

"A would be to move the time and B would be to just make sure that there are lots of TVs," Miranda said.

"Maybe they can play the shout song after every Bills touchdown," said Jackson.

But there is one ultimate solution for the two.

"We can move the concert up," Miranda said, "And then like everyone can stay at Riverworks and watch the game together. We can have a watch party with the Goo Goo Dolls."

7 Eyewitness News reached out to Star 102.5 and the Goo Goo Dolls but haven't heard back yet. The GM of Riverworks said as of now, there are on plans to show the game during the concert.