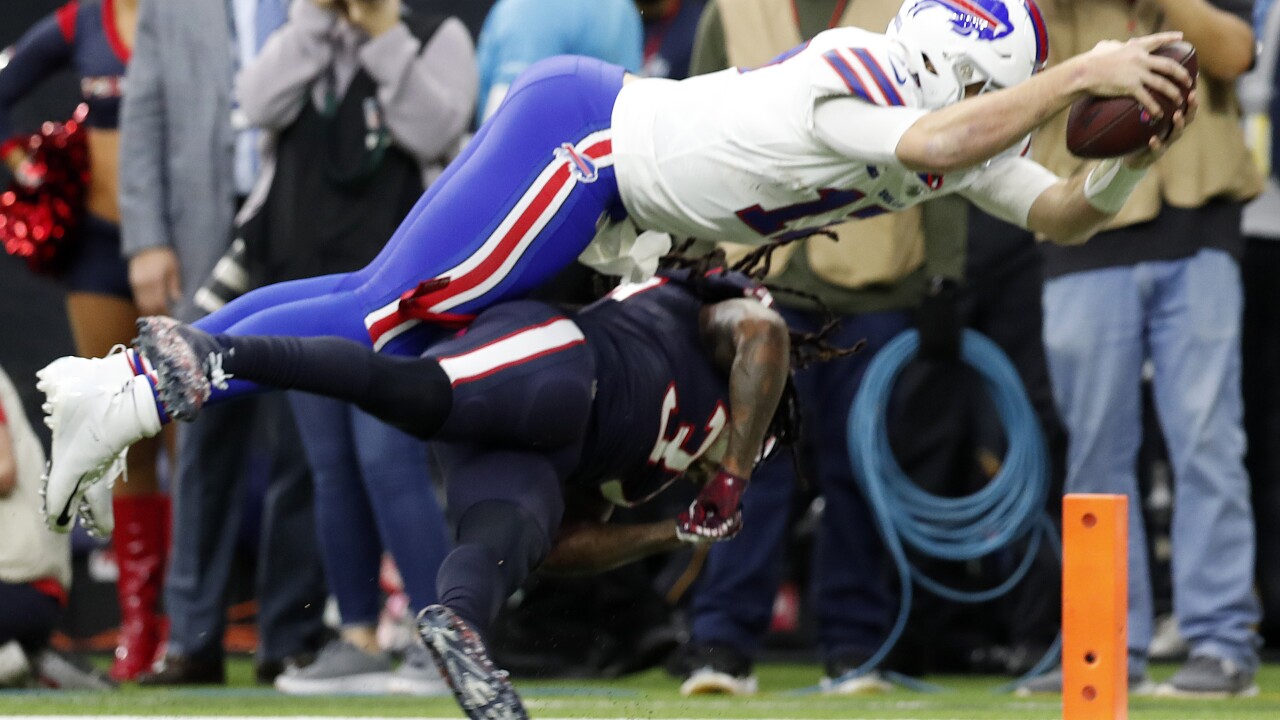 Tim Warner/Getty Images
HOUSTON, TEXAS - JANUARY 04: Quarterback Josh Allen #17 of the Buffalo Bills leaps over Jahleel Addae #37 of the Houston Texans for a touchdown on a pass from John Brown #15 (not pictured) in the first quarter of the AFC Wild Card Playoff game at NRG Stadium on January 04, 2020 in Houston, Texas. (Photo by Tim Warner/Getty Images)

HOUSTON (WKBW) — The Buffalo Bills lose 22-19 to the Houston Texans in overtime.

Bills quarterback Josh Allen started the first drive of the game with a 40-yard run and followed it up with a touchdown reception from wide receiver John Brown.

The Bills extended their lead with two 40-yard field goals from kicker Stephen Hauschka to make it 13-0 Bills at the half.

Houston Texans quarterback Deshaun Watson only threw for 49 yards in the first half, and was sacked four times. Twice by both Jerry Hughes and Trent Murphy.

Hauschka put the Bills up 16-0 with a field goal just shy of 40 yards.

Deshaun Watson rushed for a 20-yard touchdown and rushed for a 2-point conversion to cut the score to 16-8 late in the third quarter.

Josh Allen fumbled the football early in the fourth quarter to give Houston great field position, resulting in Houston kicking a successful field goal to cut the lead to five.

Texans running back Carlos Hyde gave the Texans the lead for the first time, and the Texans had a successful two-point conversion to give Houston a 19-16 lead with less than five minutes to go.

The Bills who were stopped by the Texans on a previous possession, and stopped the Texans with less than two minutes to go.

Both teams failed to score on their first possession of overtime.

Deshaun Watson escaped multiple tackles making a 34-yard throw, setting up a 28-yard field goal to give Houston the win.