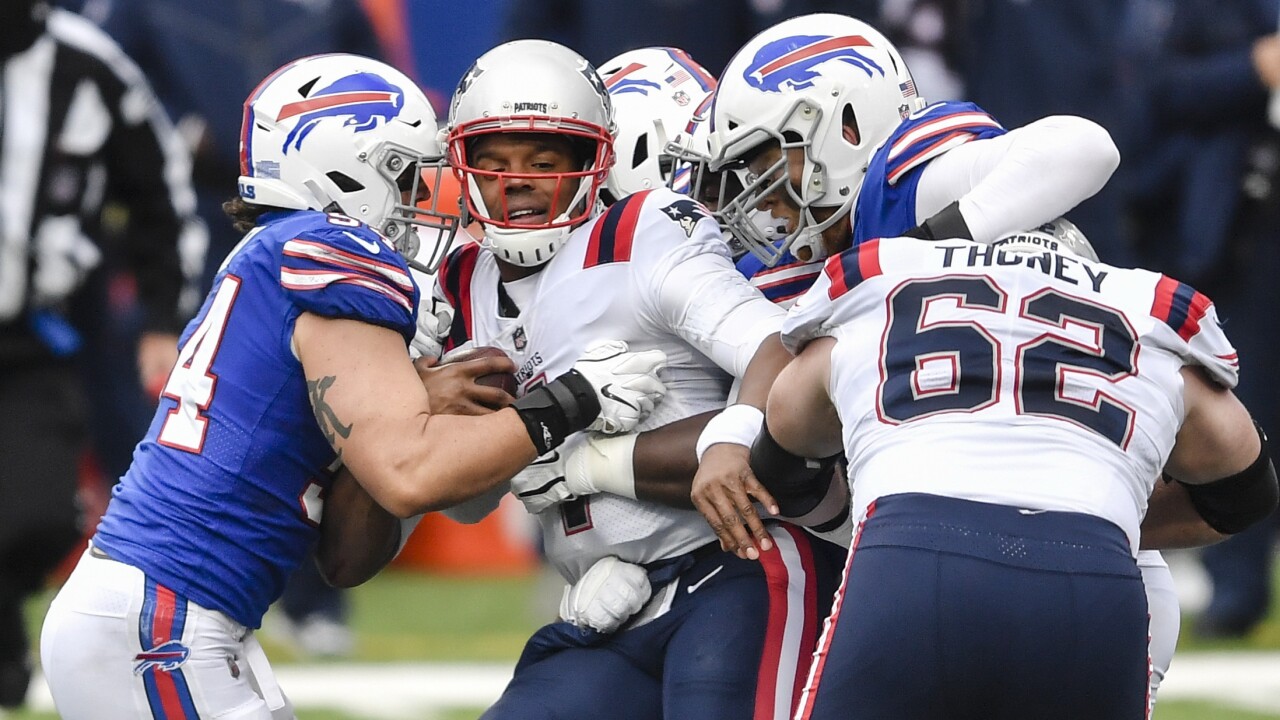 ORCHARD PARK, NY (WKBW) —
For the first time since September 2011, the Buffalo Bills are winners over the New England Patriots on their home turf, topping their AFC East rival 24-21 Sunday afternoon. With the win the Bills improve to 6-2 on the season and 4-0 in their division.

The Bills found success on the ground early, rushing on seven of their first ten plays. Zack Moss put the Bills up 7-0 in the 1st quarter when he ran in from eight yards out for his first career rushing touchdown. The Bills defense, meanwhile, held the Patriots off the board in the first 15 minutes, allowing just 39 yards of offense.

The Bills came out of the locker room and capitalized right away. In a five-play 75-yard drive, Stefon Diggs caught a 41-yard pass to put them inside the Patriots five and Moss, with the help of a few offensive linemen, finished things off with his second rushing touchdown of the game to put the Bills up 14-6.

Whole squad in for the TD‼️

That Bills lead was short lived though. The Patriots finally found the end zone later in the third quarter after Damien Harris took it in from 22 yards out, finishing off a short-field drive to tie the game 14-14 after the successful two-point conversion.

The Bills, finishing their drive that started late in the 3rd quarter, took the lead back just minutes into the 4th. After recovering the onside kick, the Bills took a short field and turned it into another touchdown on a run by QB Josh Allen. It was Allen's first rushing touchdown since week four against the Las Vegas Raiders.

The Patriots once again tied the game up just minutes later. QB Cam Newton responded to Allen's touchdown with one of his own to cap off a 7-play, 72-yard drive.

The see-saw continued as the Bills went back up with minutes left in the fourth. Tyler Bass connected on his first field goal attempt of the game, a 22-yarder, to put the Bills on top 24-21.

The Patriots had a chance to tie and/or win the game, driving in Bills territory with less than a minute to go. Newton though, on the carry, was stripped of the ball by Justin Zimmer inside the Bills 20 where it was recovered by Dean Marlowe to seal the Bills win.

Allen finished the day completing 11-of-18 passes for 154 yards and an interception. He also added 23 yards on the ground, including the touchdown. The Bills ground game was much better than in recent weeks. Devin Singletary and Zack Moss both grabbed new season highs in rushing. Singletary, who previously had a season-high of 71 yards against the LA Rams, ran for 86 yards on 14 carries. Moss, who previously had a season-high of 47 yards against the NY Jets, finished with 81 yards and those two touchdowns, becoming the first Bills running back since LeSean McCoy in November 2018, to have two rushing scores in a game. WR Stefon Diggs led all receivers with six catches for 92 yards.

The Bills defense had an up and down day. After starting off fairly strong in the first half, the Bills defense struggled against the run during the final 30 minutes, and ended up allowing 188 rushing yards on the day against an offense that came into the game 4th in the league in yards per game. Patriots QB Cam Newton completed 15-of-25 passes for 174 yards. He was sacked twice, once by Jerry Hughes, who now has 49.5 career sacks which is good for 5th in team history.

The Bills will be back at Bills Stadium on Sunday, November 8th, when they host the Seattle Seahawks. Kickoff is scheduled for 1 p.m.