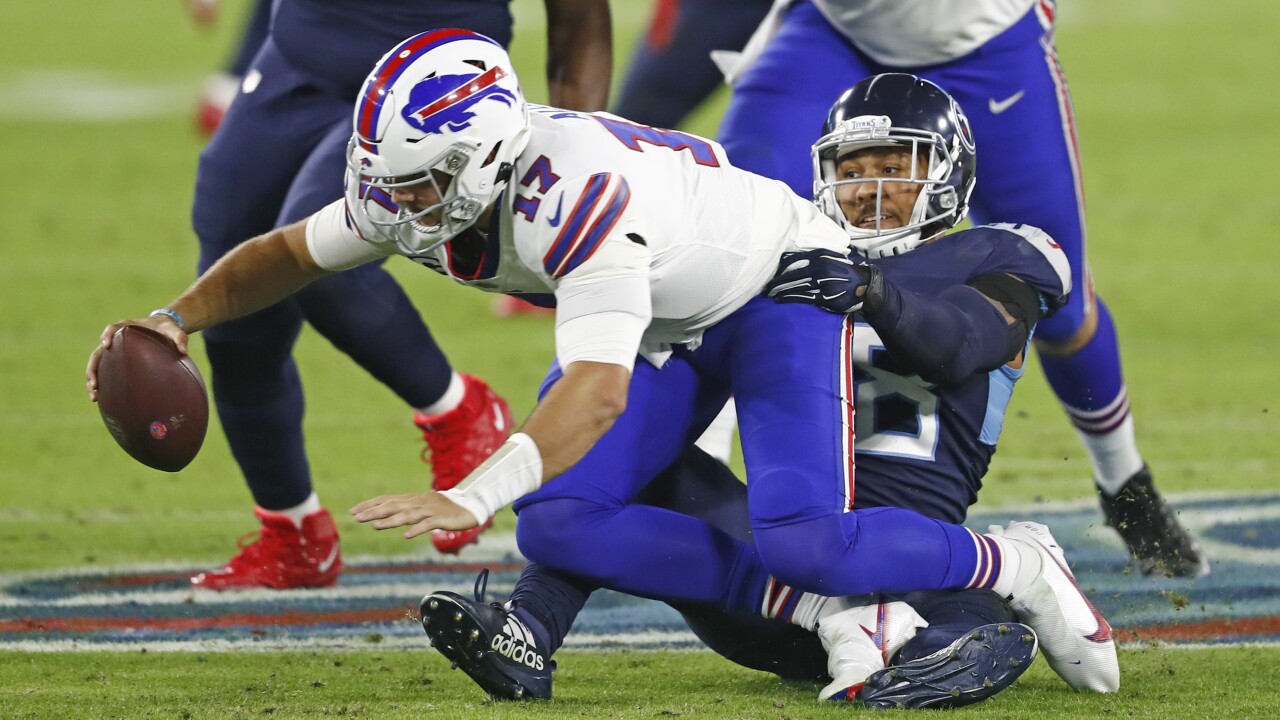 BUFFALO, NY (WKBW) — For the first time this season the Bills ended on the losing side of things, falling to the Tennessee Titans 42-16 on Tuesday night. With the loss the Bills drop to 4-1 on the season.

The Bills found themselves in unfamiliar territory early on as the Titans, capitalizing off a Josh Allen interception, struck first to go up 7-0 just minutes into the game. It was the first time all season the Bills didn't score first. The lead didn't last long though as the Bills stormed back to tie things up on a 15-play, 76-yard drive that ended in Isaiah McKenzie's first touchdown of the season.

Catch him if you can!

The Titans began the second quarter deep in Bills territory and took the lead back with a Derrick Henry rushing touchdown. While the Bills cut into that lead thanks to a 43-yard field goal from Tyler Bass, the Titans stormed down field to extend that lead to 21-10 at the half, handing the Bills their first halftime deficit this season.

Just like they did in the first quarter, the Titans took advantage of a Bills turnover in the third. With less than two minutes left in the quarter, Josh Allen was intercepted once again which led to the Titans' 3rd touchdown of the game to go up 28-10.

Allen has had many fourth quarter comebacks already this season and started the final 15 minutes by cutting into that Titans lead, finding TJ Yeldon [his first touchdown of the season] to make it 28-16 after the failed two-point conversion. From there though, the Titans added the exclamation point after Henry scored his second touchdown of the game and the Titans special teams unit recovered an Andre Roberts fumble on the kickoff to seal the win.

Allen, who entered the game with just one interception on the season, threw two in the loss. He finished the day completing 26-of-41 passes for 263 yards and two touchdowns. The offense, playing without WR John Brown [knee], was led by Stefon Diggs who finished with 10 catches for 106 yards. The run game, who was also without RB Zack Moss [toe], had an extremely quiet night with T.J. Yeldon leading the ground game with just 52 yards on seven carries.

The Bills defense, playing without key starters like LB Matt Milano [pectoral], CB Tre'Davious White [back], and Levi Wallace [IR], had troubles from the start and allowed more than 300 yards of offense and five touchdowns. Titans RB Derrick Henry finished with 57 rushing yards and two touchdowns while QB Ryan Tannehill went 21-of-28 for 195 yards with four touchdowns [three passing, one rushing].

The Bills (4-1) will be back at home next week when they take on the Kansas City Chiefs (4-1) Monday night at Bills Stadium.