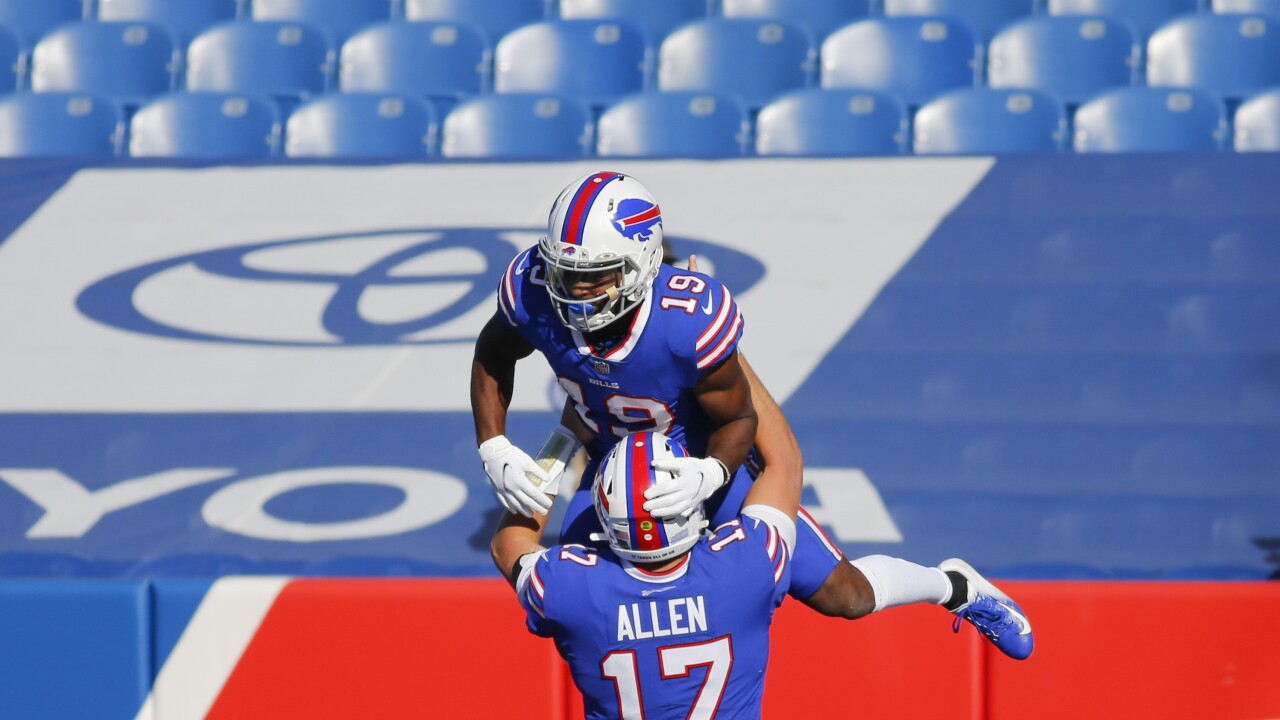 Jeffrey T. Barnes/AP
Buffalo Bills quarterback Josh Allen (17) celebrates with teammate Isaiah McKenzie after they connected for a touchdown during the first half of an NFL football game against the Seattle Seahawks Sunday, Nov. 8, 2020, in Orchard Park, N.Y. (AP Photo/Jeffrey T. Barnes)

ORCHARD PARK, NY (WKBW) — It's a good game for the Buffalo Bills when you rarely see punter Corey Bojorquez on the field. That was the case Sunday as the Bills capitalized on all but three drives [two punts, one missed field goal], topping the Seattle Seahawks 44-34 Sunday afternoon. With the win, the Bills improve to 7-2 for the first time since 1993.

The Bills came firing right out of the gate, starting with a 60-yard Andre Roberts kickoff return. Three plays later, the Bills took an early 7-0 lead when Josh Allen found Isaiah McKenzie to cap off a three-play, 45-yard drive.

After the Bills defense forced a three-and-out on the Seahawks first drive, the Bills offense capitalized again when Allen grabbed his second touchdown of the day on a one-yard pass to Tyler Kroft to go up 14-0 after 1Q. The Bills defense, once again, had a huge stop on the Seahawks next drive after Jordan Poyer intercepted Russell Wilson in the end zone, and the Bills offense responded with a 44-yard field goal to go up 17-0.

After the Seahawks finally found the end zone on a Wilson QB sneak, the Bills offense once again had a response. Allen found the end zone again, connecting with Gabriel Davis on a four-yard pass. The Bills led it 24-10 at the half.

After a fumble recovery by the Bills defense to start off the second half, the Bills offense 3rd quarter struggles returned. After finding the end zone three times in the first half, the offense didn't see it at all in the 3rd quarter, settling for a field goal and punting it for the first time all day. In the meantime, the Seahawks turned a solid quarter, putting up ten points to make it a 27-20 game at the end of the 3Q.

The Bills got back in the end zone to begin the 4th quarter with their first rushing TD of the game, a one-yard run from Zack Moss to put the Bills back up by two scores.

They say Russell Wilson and the Seahawks offense can overcome any deficit but the Bills defense didn't back down. Tre'Davious White came up with his first interception of the year to set up a first and goal for the Bills offense, which took one play - an Allen run - to make it a 41-20 game. After the Seahawks found the end zone to cut the deficit to 14, the Bills defense once again came up big. Driving more than midway through the 4th, AJ Klein stripped Wilson of the ball to set up a field goal as the Bills went back up by three scores.

Despite the Seahawks finding the end zone one more time, the Bills hung on to secure their 7th win.

Josh Allen and his targets had no problem taking advantage of the worst pass defense in the league. Allen was 31-of-38 for 415 yards, the second time he's surpassed 400 yards this season, and three touchdown passes. Stefon Diggs led all receivers, surpassing 100 yards for the fourth time this season with 118 yards, while John Brown finished with eight catches for 99 yards.

The Bills run game was fairly quiet with Zack Moss leading the ground game with just 17 yards and that touchdown. Despite the high numbers from Allen and his receivers, the offensive line had their ups and downs allowing seven sacks [29 yards lost].

The Bills defense didn't make Russell Wilson's day easy by any means. They intercepted Wilson twice, sacked him five times, and forced two fumbles [both recovered by the Bills].

The Bills will hit the road next Sunday when they travel to the Arizona Cardinals. Kickoff is scheduled for 4:05pm.