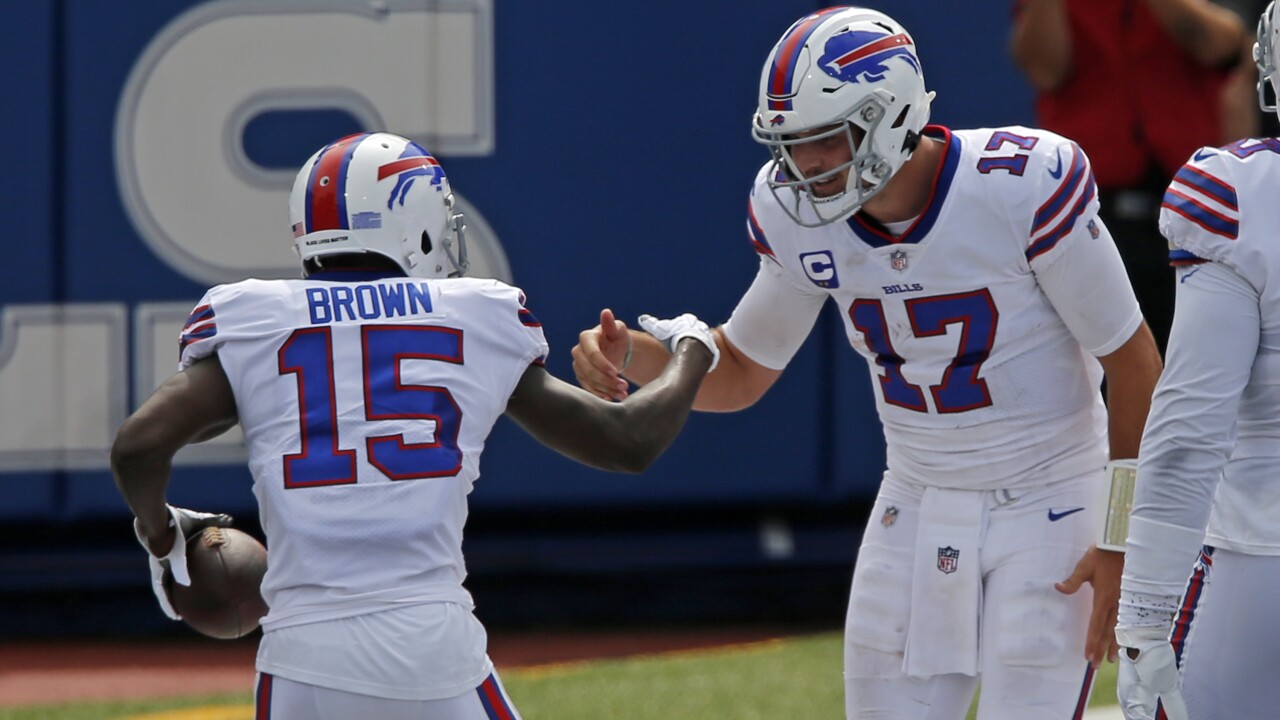 Jeffrey T. Barnes/AP
Buffalo Bills wide receiver John Brown (15) celebrates with quarterback Josh Allen after they connected on a pass play for a touchdown during the first half of an NFL football game against the New York Jets in Orchard Park, N.Y., Sunday, Sept. 13, 2020. (AP Photo/Jeffrey T. Barnes)

ORCHARD PARK, NY (WKBW) — Go 1-0 each week. That's the goal for every NFL team and the Buffalo Bills are off to a good start, topping the New York Jets 27-17 in Sunday's season opener.

Quarterback Josh Allen, in his third season under center, recorded a career first by throwing for more than 300 yards in a game. He finished the day 33-of-46 for 312 yards and three total touchdowns. Allen's downside, and obvious point of emphasis this upcoming week, was ball protection after he fumbled and lost the ball twice in the first half.

While the Bills pass game seemed to be much better in this season's opener compared to last year, with Stefon Diggs leading all receivers with 8 catches for 86 yards, the run game struggled with both Devin Singletary and Zack Moss combining for just 18 carries for 41 yards. Allen led all rushers with 59 yards including the team's lone rushing touchdown.

The Bills defense, for the most part, had a solid day. Before the Jets' final drive of the first half, the Bills unit kept them off the board by forcing three three-and-outs and an interception. The second half saw them give up a 69-yard TD to Jamison Crowder and a short TD run with less than a minute remaining. It's important to note the Bills defense were without linebackers Tremaine Edmunds (shoulder) and Matt Milano (hamstring) for the majority of the second half.

Making his NFL debut, rookie kicker Tyler Bass made 2-of-4 field goals, missing from 34 and 38.

The Bills will be hitting the road for the first time next weekend when they take on the Miami Dolphins (0-1). A limited number of fans will be allowed inside Hard Rock Stadium.