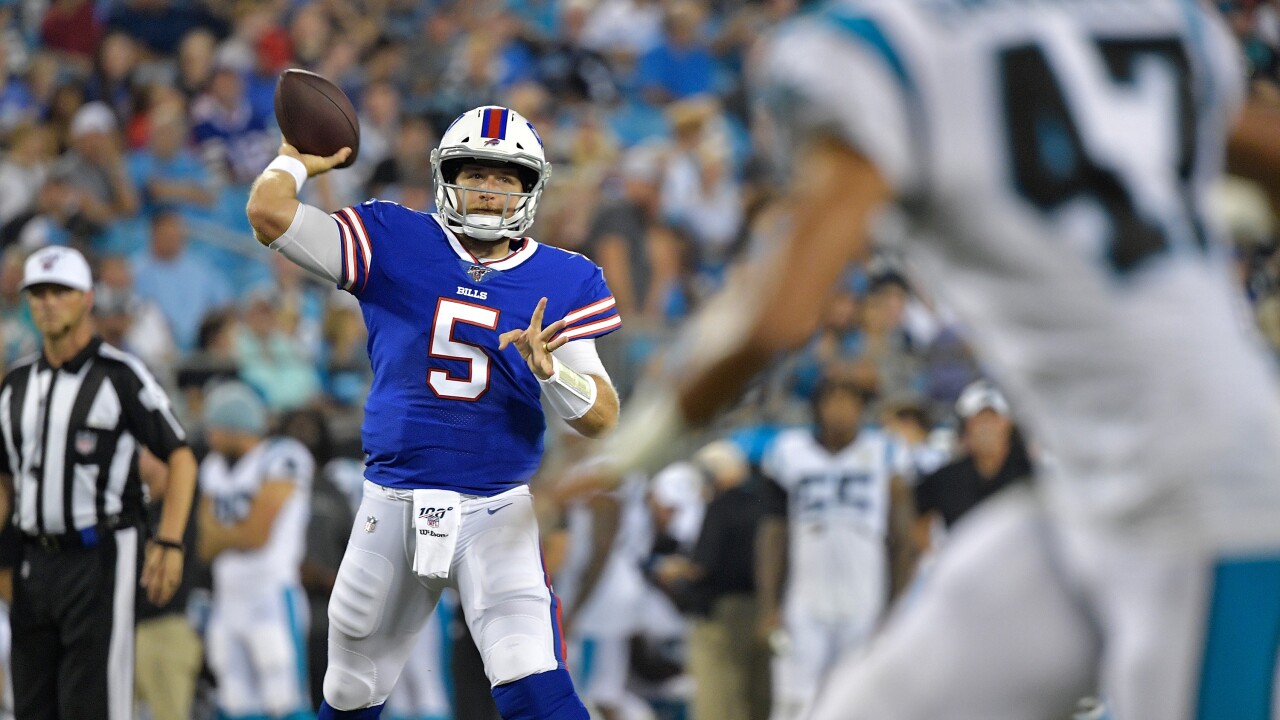 ORCHARD PARK, N.Y. (WKBW) — Congratulations Bills fans, you've survived the 2019 preseason. The next time the Bills hit the field for a game it'll be in New Jersey when they take on the Jets in week one.

But what did we learn from the four practice games and who stood out? Without further ado, the 2019 Bills preseason awards.

For the first time in a long time, it appears the Bills have a reliable backup quarterback. In his three preseason games, Barkley completed 29 of the 38 passes he attempted for 350 yards and three touchdowns. Sure, it was against mostly backups but that stat line is absurd and Barkley looked awesome. If he needs to be called into action at any point this season, the Bills should find solace in knowing they have one of the best backups in the NFL.

Matt Barkely with another DIME to Zay Jones. @MattBarkley

"He's big, he's athletic, he runs, he's long, he's like the perfect body type for this defense. McDermott's got a great defense and I think he's gonna thrive in it."

That's high praise from one of the best defenders in the game and it's completely warranted. Edmunds should have a monster season in 2019 and he showed during the preseason why so many of his teammates and coaches are excited about his progress.

When training camp concluded in early August it didn't look like wide receiver Duke Williams had any real chance at making the 53-man roster. Then the games happened.

In the second and third preseason games, Williams dominated, catching contested balls for touchdowns against both Carolina and Detroit. He showed off his size and made defenders look helpless as he posterized his opponents. It was the type of plays fans thought he'd be making all summer.

Against the Vikings, Williams didn't do much but either did the guy throwing to him until the wideout had already left the game. Hard to knock Williams for that.

So was Williams' push too little, too late [shoutout Jo-Jo]? We'll find out Saturday.

In all three preseason games seventh-round pick Darryl Johnson played in he made a big play. Whether it was the sacks he had in the first two preseason games or the great tackle he made on a punt against Detroit, Johnson stood out. He's a lock to make the Bills roster and he's going to get plenty of playing time this season, which is pretty impressive for a guy picked in the seventh round.

Rookie of the preseason: Ed Oliver

This one could've gone a few different ways. Oliver edges out rookie running back Devin Singletary because of his impact against mostly starting offensive lineman. Oliver didn't record any sacks or make any huge tackles for losses but he generated pressure and caused some problems for opposing lineman. If he can continue to generate pressure up the middle it'll help every other player on the defense. Oliver wasn't lights out in the preseason but he had some flashes.

I'll remember the Christian Wade touchdown in the first preseason game for a long time. Which is saying something because I don't remember very many preseason plays from all the years I've covered the team. The Wade touchdown gained national attention and even had some fans thinking he would make the 53-man roster. That's not going to happen but don't be surprised if Wade is kept on the practice squad. If the Bills decide to keep him.