Why WR Devin Funchess makes sense for the Buffalo Bills 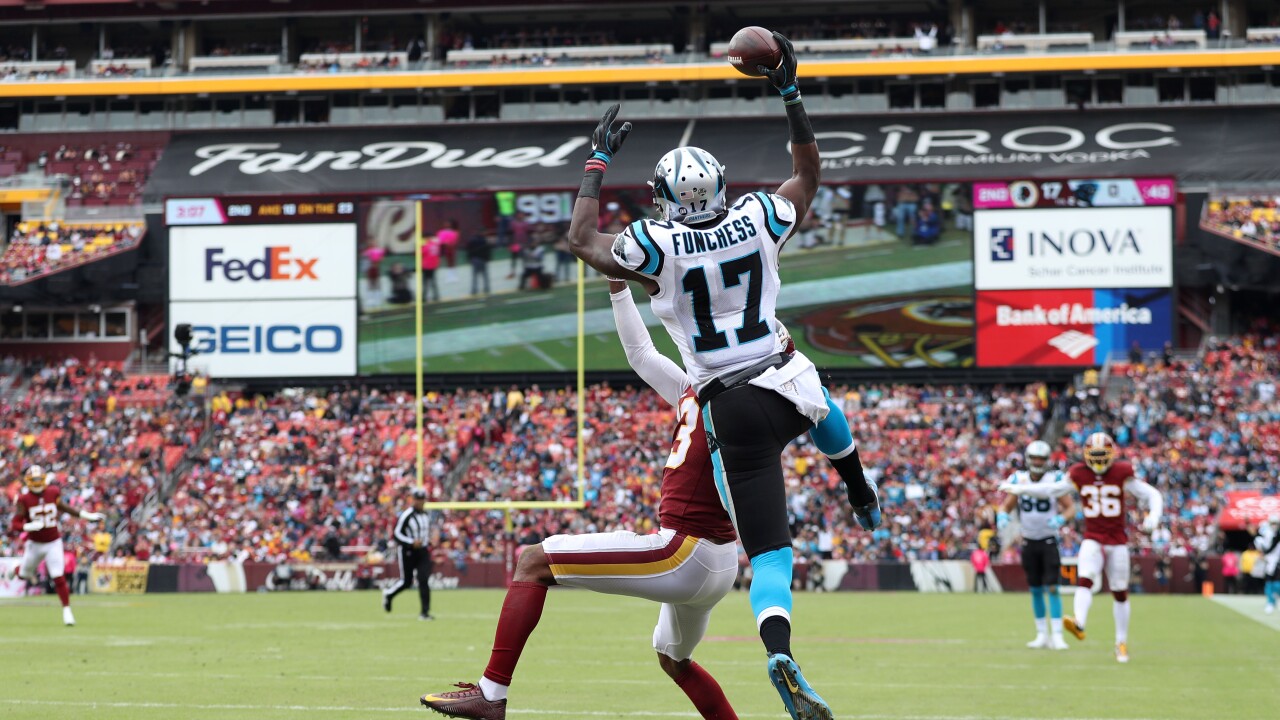 (WKBW) — In just a little over one week, the National Football League will begin the next stage of an always tumultuous offseason. Free agency will officially open up for business on Wednesday, March 13, when players with expired contracts can freely switch teams.

For the Buffalo Bills, free agency is right in their wheelhouse of tools they must use to improve a roster that lacked talent dramatically. Without any of their key free agents set to strike it big on the open market, the Bills don't have to worry about spending and to miss out on future compensatory draft selections.

Especially with how Brandon Beane denied the notion that being "judicious" is the same as being prohibitive to signing the bigger fish in free agency, all options are still firmly on the table for the Bills. All this week, 7ABC will be going through five names that make sense for the Bills in free agency.

And one of those names is former Carolina wide receiver Devin Funchess, a former second-round pick that fell out of favor with the Panthers in the 2018 season.

Wide receiver is one of those positions that Bills fans have been clamoring for since the start of the 2018 season. However, with the vast improvement of both Zay Jones and Robert Foster in the second half of the season, it complicates the need for a receiver a bit -- which may make a boundary receiver less of a necessity.

However, if they can add a complementary piece to the outside without spending a ton, that's where it starts to make sense. And while the name Funchess might get the eye-rolling treatment, it makes a lot more sense than you'd initially think.

How Funchess would fit the Bills roster:

Before we continue, I think it's important to clear up one thing. Just because Funchess is a bigger-bodied receiver from Carolina, it does not mean he is the same player and person as Kelvin Benjamin. They are two different players and situations from one another.

However, one notion that we can't forget from the Benjamin year-and-a-half in Buffalo is that it was one of the moves made by general manager Brandon Beane to bring in a receiver. That means the man in charge of building up the roster places a value on having a bigger receiver that can win on receptions a bit differently than everyone else on the roster.

To a lesser degree, because the player is unproven, it's why the Bills are kicking the tires on CFL wide receiver Duke Williams with a reserve/futures contract. The Bills like to give themselves a cornucopia of options at wide receiver, all possessing something different.

In Jones, they have a possession receiver that has to win with his footwork on out routes and over the middle. In Foster, they have a home run option that can speed past most defensive backs.

And in Funchess, they would have the go-up-and-get-it type of receiver that can high point the ball and outjump the competition. It's a type of player that they do not currently have -- at least not someone who has established success in the NFL.

Following a breakout third season with the Panthers in which Funchess racked up 63 receptions for 840 yards and eight touchdowns, the wide receiver was on a similar track in the first half of the season. In their first eight games, he brought in 36 receptions for 445 yards and three touchdowns, which if extrapolated over a 16-game season, was on pace to set his single-season highs in both catches and yards.

In the final eight games, though, the wheels fell off somewhere, and Funchess fell out of favor with the Panthers. After a seven-game losing streak, the Panthers decided to make Funchess a healthy scratch in the team's Week 17 matchup in New Orleans -- which is a bad look all around for the player, and a statement from the team that they were ready to move on without him.

However, the receiver proved to be an extremely productive player over 75-percent of the last two seasons, which is why he must be taken seriously as a potential free agent addition. And just the same with Benjamin, Beane knows as much about Funchess as anyone.

After all, the last time Funchess was written off following his second season, he responded with his best season by a large margin. Regardless of how it ended in Carolina, there is talent there.

And perhaps above all else, there is an opportunity there for Beane and the Bills as well to strike on a unique situation.

How Funchess would fit the salary cap structure:

With how the season ended for Funchess and the Panthers, there now likely exists some hesitation from teams in investing too heavily in the wide receiver on the open market. After all, receivers get an absurd amount of money on the free agent market if they're a clean prospect, so teams can't be too careful.

Considering the potential hesitation, that's where the unique situation comes in for Beane and the Bills. He could bring in a productive receiver on a relatively low-risk contract, add something that he doesn't have on the roster, and best yet, the player will be only 25 years old during the 2019 season.

A low-risk play on a young player with considerable upside, you say? That sure sounds like an investment that Beane likes to make.

It all depends on the expectation of Funchess about the open market. I could see the Bills trying to sell the receiver on a short-term, moderately paid contract quite effectively.

With how well Beane knows Funchess, he can also provide the player with an opportunity that he won't find elsewhere in the NFL -- a receiver room that has no established players. While the Jones and Foster duo offers some promise, there exists the opportunity for Funchess to come in and be 'the guy' with a chance-taking quarterback, and the chance to prove himself for his next long-term, lucrative contract.

After all, the Bills just did the same thing for defensive tackle Jordan Phillips who was also a former second-round pick, so it's an opportunity that Beane likes to take advantage of to potentially help his roster.

How Funchess makes the Bills better for the short and long term:

The short-term optics of the move are visible. The Bills would be adding a boundary receiver with starting potential that offers up the size that they've shown to covet in the past, but do not currently have rostered in the present.

If all goes well, the Bills would have three boundary receivers in Funchess, Jones, and Foster to rotate as the game goes along to keep everyone fresh, while the addition of a true slot receiver would also be a want and need for the offseason. With Funchess and perhaps a drafted slot receiver, that would give the team true depth at wide receiver with four capable targets -- something the Bills didn't have at all in 2018.

If Funchess regains his form from the 2017 season and the first half of 2018 to be an impact player, the Bills would have a decision to make in the 2020 offseason -- with two distinct options.

They could either try to get him signed to a long-term deal, considering he'd be 26 years old and entering the prime of his career. It would provide them with a potential long-term target for Allen to work with as he tries to become the quarterback they envisioned when they drafted him.

Or, they could let Funchess walk, and make the insanity of the free agent market for wide receivers work in their favor by helping to deliver them a significant compensatory pick for the 2021 NFL Draft. Keep an eye on how much Tyrell Williams makes this offseason, and you'll get an idea of what could be down the line.

Now, of course, because this move isn't guaranteed to work because of how things ended in Carolina, the chance exists that he's a flop of a signing. In that case, the Bills ideally would have him signed to a short-term, prove-it deal and could walk away while trying to find another option somewhere in the 2020 offseason.

Either way, as long as it's a short-term deal without the crazy money that you see flying around for some free agents, Funchess to Buffalo has a ton of upside without the risk you'd have in signing someone like Tyrell Williams or Adam Humphries -- while being on the hook for a long, long time. With all the needs this Bills team has in the offseason, it calls for Beane to get creative with some of his moves -- and this one would fit right into that thinking.

If you can get past the Benjamin and Carolina angle, it's an easy sell that won't cost the Bills a sizable amount of their cap. And with it, another productive option for Allen's arsenal.