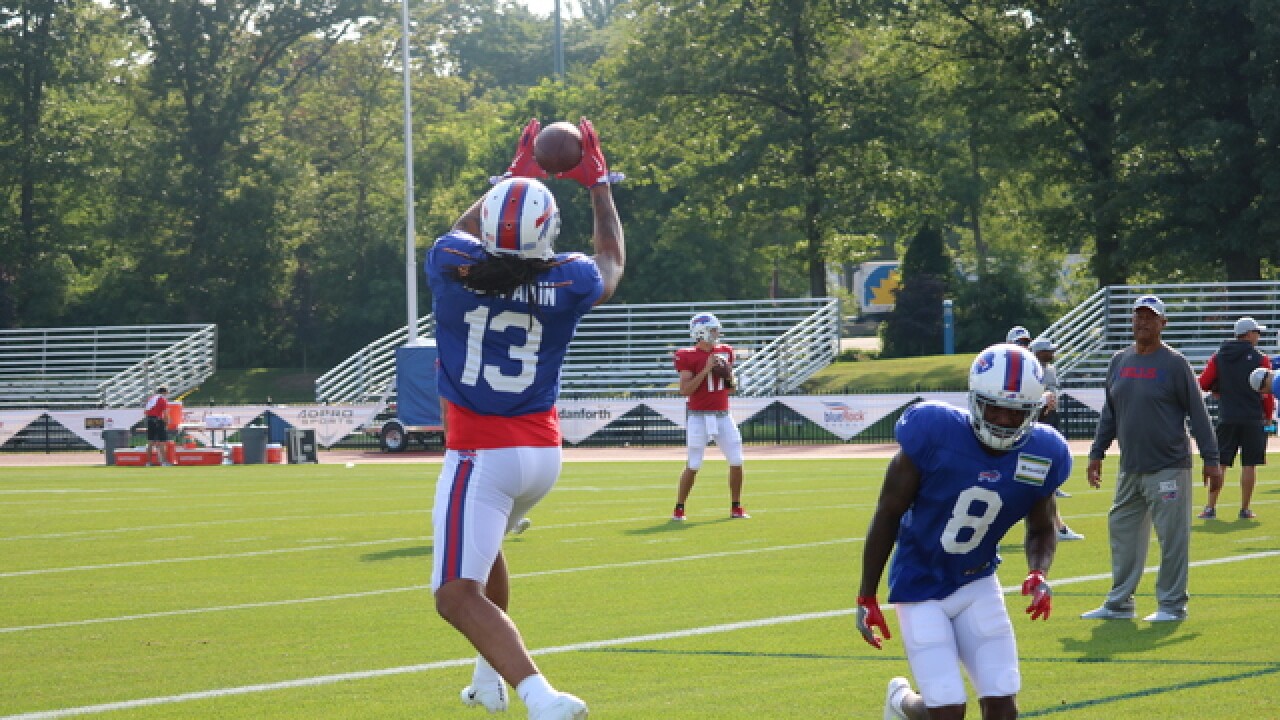 The Buffalo Bills reached a milestone of sorts on Friday night -- returning home to Orchard Park for their first practice of 2018 under the bright lights of New Era Field. There was a bit more of a buzz in the air for the practice than the one the Bills had just completed on Thursday morning at St. John Fisher College.

And with some veteran rest days (LeSean McCoy, Charles Clay, Kyle Williams, and Lorenzo Alexander) and some other players that were injured heading into the night (DE Trent Murphy, WR Andre Holmes, and WR Quan Bray), there were a lot of opportunities to go around for some lesser-known players.

What stood out on Friday night? Seven observations from Day Eight of Bills training camp:

1) McCarron drops back down to the twos
- It was fun while it lasted for A.J. McCarron, who received consecutive days with the first-team offense -- the first quarterback on the Bills roster to do so through the spring and summer. On Friday, McCarron was back down with the second-team offense, along with head coach Sean McDermott dismissing the notion that there was anything to be taken away from the quarterback getting those two straight days with the top unit. Even though he was working with the second team, he also had the most pass attempts in team drills of any of the quarterbacks. It wasn't pretty, by any means. He offered up a pair of throws over the middle of the field that incurred a massive hit from the defender -- one of which brought on a rib injury for wide receiver Kaelin Clay. McCarron also took three sacks through team drills, which upped his seven-day total to 17 in team drills -- which is now proving to be a true weakness to his game. Perhaps he'll start to get the ball out quicker during the preseason, but it's clear that he needs to make decisions quickly if he's going to fire the ball down the field. As for Nathan Peterman and Josh Allen, both players peaked in the live drill at the goal line with a touchdown toss a piece. Allen threw a couple of solid passes 15-to-20 yards down the field during team drills, but outside of those, the duo didn't do much to discern themselves.

2) Croom takes a significant step in his development
- One of the biggest surprises of training camp has been how well Jason Croom has played through the first eight days, and on Friday, he served up his best day of the bunch in front of a large audience at New Era Field. Croom, a former college wide receiver that the Bills worked last year to move to tight end, has risen up the depth chart through the first week and moved ahead of both Khari Lee and Keith Towbridge. Then with Nick O'Leary and Logan Thomas getting banged up mid-week, Croom had even more chances for reps. Through it all one thing has remained consistent. Croom has been making plays and is getting himself noticed by the coaching staff. On Friday, with Charles Clay taking a rest day, Croom even worked in with the first-team offense at times and made two highlight-reel plays for the practice -- a one-handed catch in the end zone from Peterman, and then a catch along the sideline with a defender all over him. With his performance at camp so far, he is forcing the hand of the Bills coaching staff to the point where they have to consider him for a spot on the 53-man roster. Much will depend on the preseason, how he blocks in those games, and if he's able to have a similar impact. If he does, this could be a sleeper waiting to crack the 53.

3) Foster falling behind others in the WR race
- One of the darlings of the spring practices, Robert Foster has struggled for much of camp and had a night to forget at New Era Field on Friday. Now working with the second-team offense, Foster is getting loads of opportunities to make plays during camp, but he just hasn't been able to take advantage. We've seen him double-clutch routine catches, he's dropped passes flat out, he hasn't been strong enough on the ball for contested catches, and worse yet, he's been outplayed by players that were behind him to open up camp. Amidst all those troubles, Foster found some space and made a play over the deep middle of the field. Two steps after corralling the catch, Rafael Bush came over and stripped the ball out of Foster's arm because the wideout wasn't carrying it firmly enough. That play, in addition to another drop, later on, is just a clear indicator of the mediocre camp he's had to this point. He needs to turn it around during the preseason games to have a chance to make the 53-man roster.

4) Is Reilly moving up?
A fan favorite from training camp and preseason in 2017, wide receiver Brandon Reilly seemingly has done all the right things as camp has gone on. Over the last three practices, Reilly has consistently worked with the first-team offense.  And even though the Bills have been without Andre Holmes, who usually factors into the top offensive unit, there is a clear indication that Reilly has moved up. Rather than Robert Foster and Malachi Dupre getting time there, it's now a mix of Kelvin Benjamin, Jeremy Kerley, and Reilly. They've been using him as a bit of a versatile piece as well, working both on the outside and inside at slot receiver. On Friday, Peterman targeted Reilly on three of his six pass attempts, another indication that he's working hard to get open in multiple areas of the field. If he makes plays during the preseason as he did in 2017, it appears as though he has a great chance to make the 53-man roster as others around him have faded a bit.

5) One linebacker moving up and all around
- Outside of the top defensive unit, the Bills have been mixing it up with their linebacking group on the second and third-team. On Friday, one of their free agent acquisitions started to get some different opportunities than he had been in previous practices. Julian Stanford, mainly signed for his prowess on special teams, split some second-team defense reps at middle linebacker with Tanner Vallejo, and then even worked into the lineup as a strongside linebacker -- the fist we've seen of that. Stanford has been a mainstay on both coverage units on special teams for the Bills through the first eight days of practice, and he has outplayed Vallejo to this point on defense as well. If the Bills continue to use Stanford at outside linebacker, that ups his value in the eyes of the coaches.

6) Backup safety has himself a day
- The Bills didn't have much at safety in 2017 behind starters Micah Hyde and Jordan Poyer. In fact, they were quite fortunate to go through the season without losing either one of their starters for a significant amount of time. For that reason, the Bills made it a priority in the offseason to bring in the likes of Rafael Bush -- an experienced safety with special teams ability. What they've seen, especially on Friday, is a safety that can make plays over the middle of the field. He jarred a ball loose on a throw over the middle of the field from McCaron. Bush was the player that stripped the ball from Foster after the wide receiver made the catch. He's also been the only player, to my knowledge, which has worked in as the 'big nickel' in Sean McDermott's defensive scheme. Bush was one of the best players on the field on Friday and made his presence felt throughout team drills.

7) Undrafted pass rusher making some waves
- The Bills don't have many spots for the under-the-radar type of players to make the 53-man roster outright, but they have indeed been given some food for thought by some standout performances as camp has gone on. On Friday, undrafted rookie free agent defensive end Mat Boesen came away with two sacks during team drills and both of which came to him quite quickly after he blew by left tackle Conor McDermott. Boesen has flashed some ability as camp has gone on in limited opportunities, but it's enough to warrant a substantial amount of playing time late in the preseason games. I don't see a path for him to make it to the 53-man roster with what is in front of him at defensive end. However, with how he has shown up in those limited chances, he's firmly on the practice squad radar when all is said and done.

Day 8 MVP: TE Jason Croom
- Rafael Bush came close, but Croom was getting open constantly and completed the plays with some highlight-reel catches. He's been fun to watch.

Day 8 LVP: WR Robert Foster
- The undrafted rookie wideout needs to get his camp turned around after a really impressive spring.

Up Next: The Bills have Saturday off. They return to practice on Sunday, August 5 at 2:15 pm.