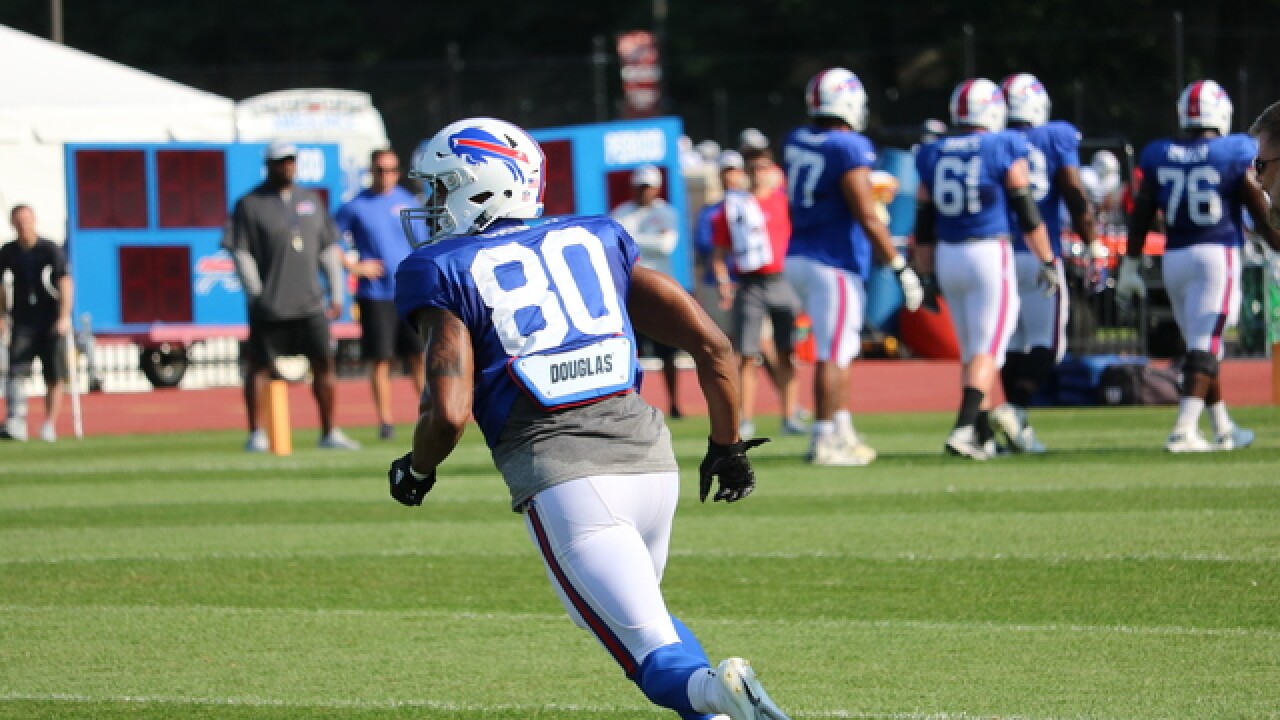 And here we are again. On the second-to-last day of training camp, the Buffalo Bills had to postpone their 8:45 am practice over seven hours due to an all morning and afternoon rain. Finally, at 4:00 pm, the Bills hit the field in a lighter practice as they continued preparations for the Cleveland Browns.

And while the Bills didn't follow the way the quarterback rotation seemed to be heading, what they did on Tuesday was an important signal nonetheless.

What stood out at Tuesday's practice? Seven observations from Day 15 of Bills training camp:

1) Josh Allen with the twos again
- Well, it wasn't quite the first-team work that could have happened given the rotation over the last two days, but the fact that the Bills gave rookie quarterback Josh Allen the full day with the second-team offense is vital in itself.  Now having taken two straight days of second-team reps, this is getting Allen acclimated with players that, for the most part, will be on the 53-man roster when all is said and done. He's throwing to roster-caliber receivers, and against roster-caliber defenders. Furthermore, getting him involved with the second-team offense for two straight days could also mean the Bills are readying him for work with the second unit in Friday's preseason game in Cleveland. Should that trend hold on Wednesday, the last practice of training camp, that would be the best evidence we could get that would confirm the plan for Allen on Friday. With the second-team, Allen looked smooth and sharp while connecting on 9-of-14 passes, and barely missing Malachi Dupre for a touchdown on a deep post. If he plays well enough against Cleveland, perhaps he might warrant some more first-team time ahead of the team's third preseason game -- which have practices in Orchard Park that are no longer open in full to the media. As for the other two quarterbacks, Nathan Peterman and A.J. McCarron flipped responsibilities from how the Bills positioned them on Monday.  Peterman worked with the third-team offense on Monday and was with the top unit on Tuesday -- and vice versa for McCarron. Peterman went 9-of-9 while taking a pair of sacks with the ones, and McCarron was 9-of-12 with the third unit. Neither player has done anything to cancel themselves out of the competition to be the starting quarterback, which further complicates Sean McDermott's ultimate decision.

2) Groy vs. Bodine update
- Just as the Bills have to decide on a starting quarterback, they'll also need the top center to emerge within the next two games you would think. Ryan Groy and Russell Bodine have both been taking one day with the top unit and the next day with the second-team offense. The Bills haven't veered from that plan. In fact, the only change they've made is to get all three quarterbacks acclimated with both centers as camp got into the late days. From what I've seen in both practice and the first preseason game of the year, I'd have to give Groy a leg up as it stands today. It looks like he's settled in at practice and was exceptionally comfortable in the initial preseason game. That's not to say that Groy has been a lot better than Bodine and that the latter has done things to warrant the former having a definite advantage. Bodine has been susceptible to power moves pushing him back too far into the pocket, but he's also shown some good ability to reset while playing with an edge. This competition is long from over, and the games will be the essential determiner.

3) A glimpse into life without Charles Clay
- As the Bills practiced on the turf field for the first time this camp due to all the rain earlier in the day, they rested starting tight end Charles Clay likely due to the unforgiving nature those turf fields tend to have. It's also probably why the Bills chose to have a practice in shorts rather than in full pads. However, it was good that the Bills rested Clay primarily because it helped indicate what their tight end depth chart really is -- especially with all the changes over the last three days. It was clear throughout practice, too. The top three tight ends, without fail, were Jason Croom, Khari Lee, and Logan Thomas. Nick O'Leary, once the second tight end for the majority of camp, was yet again pushed down to work with the second and third-team offenses. I've written it the last few days, but O'Leary is in major roster trouble as it stands. The Bills love Lee, they've seen Croom develop, and Thomas has become a well-rounded tight end over time. Not having Clay at practice is just more proof that O'Leary needs to step it up.

4) Rookie Neal getting second-team time by default
- All throughout training camp, rookie safety and fifth-round pick Siran Neal has remained with the third-team defense. It isn't the impact the Bills had hoped for, but the safety has been more of an afterthought than anything. Right from the start, Dean Marlowe took on the role as the second-team safety paired up with Rafael Bush. Occasionally Kelcie McCray would work in for some reps, but Bush and Marlowe are the most consistent pairing. However, on Tuesday, Marlowe was held out of team drills for some reason. Now, take this as educated speculation, but Marlowe is coming back from complete hamstring tears one after the other, in different legs, in consecutive years. Perhaps the reason they chose to rest him was due to the unforgiving turf field. Again, that's just a guess. However, Marlowe wasn't in there which created more reps for someone else. Neal received some time with the second-team -- but not all of it. He took a few reps, but the majority went to Kelcie McCray. Even though he had the opportunity, it's still clear that the rookie is well behind the top four of Micah Hyde, Jordan Poyer, Bush, and Marlowe.

5) Undrafted pass rusher continues his push
- As camp has gone on, I've been impressed by the array of moves that undrafted rookie defensive end Mike Love has brought to the table. He has quietly had a solid camp and hasn't been getting his reps cut into like some other players that have to squeeze some competition in for evaluation. He's even worked in with the second-team defense here and there and has flashed some potential along the way. He especially stands out in one-on-one drills, where he shows an ability to read the offensive tackle while having the speed to strike and get into the backfield. While I think it's a bit of a longshot for him to make it to the 53-man roster, he has made a strong push toward a practice squad spot. Keep an eye on number-56 at left defensive end late in the game on Friday.

6) Dawkins playing with confidence
- Over the course of training camp, there has been something different about Dion Dawkins in his second season as compared to his first. In that rookie summer, Dawkins was battling for playing time while also balancing having to fill-in for the oft-injured Cordy Glenn. He never got comfortable, and never found his home until around the middle of the season. However, Dawkins has been locked in as the starter at left tackle since the first voluntary workout session, and he's playing with an entirely different attitude. You can tell in each one of his reps that he's playing with confidence, going toe-to-toe with Jerry Hughes all camp long and winning his fair share of those battles. While Hughes had his number sometimes this camp, that is the expectation against a talented player like that. I haven't seen Dawkins try to overthink anything, instead just reading the defender and making his block attempt with some swagger along with it. He even did something on Monday that I haven't seen from an offensive tackle in practice. During his drop-step, he tried to fake defensive end Terrence Fede with his hand to try and get the player to take the bait and go where Dawkins could hammer down on him to win the rep. Considering how comfortable he looks, he could be on the way for an improved second season.

7) Notable change on the top kickoff unit
- On Day Four of training camp, I took down the top kickoff coverage unit with the intention of comparing how it looked with what they put out there near the end of training camp. This exercise is quite useful to figure out which players are in better standing for the final roster spots than others at their position. On Day Four, the ten men in coverage were Lafayette Pitts, Rafael Bush, Deon Lacey, Ramon Humber, Travaris Cadet, Taiwan Jones, Julian Stanford, Dean Marlowe, Ande Holmes, and Phillip Gaines. Now, compare that to Day 15, and spot the key difference. This group consisted of Lafayette Pitts, Rafael Bush, Deon Lacey, Ramon Humber, Matt Milano, Taiwan Jones, Julian Stanford, Rod Streater, Andre Holmes, and Phillip Gaines. Who were the two that weren't included on Day 15? Cadet and Marlowe, but Marlowe was sitting out of practice for unknown reasons. This information leads us to Cadet, who has been passed by Marcus Murphy on the depth chart as the number-three running back. And in case you're wondering, Cadet wasn't even on the second-team kickoff coverage unit, either. Those bottom of the roster players have to provide some special teams value, and it appears Taiwan Jones has the clear edge there. Cadet could be in trouble.

Day 15 MVP: Dion Dawkins
- The starting left tackle is playing with tons of confidence and had two easy victories in one-on-ones versus Jerry Hughes and Terrence Fede.

Day 15 LVP: TE Nick O'Leary
- The tight end, who is now likely fighting for a roster spot, looked a bit slow in his movement and also dropped a pass. He needs a big preseason.

To see the full depth chart from Day 15, click here!