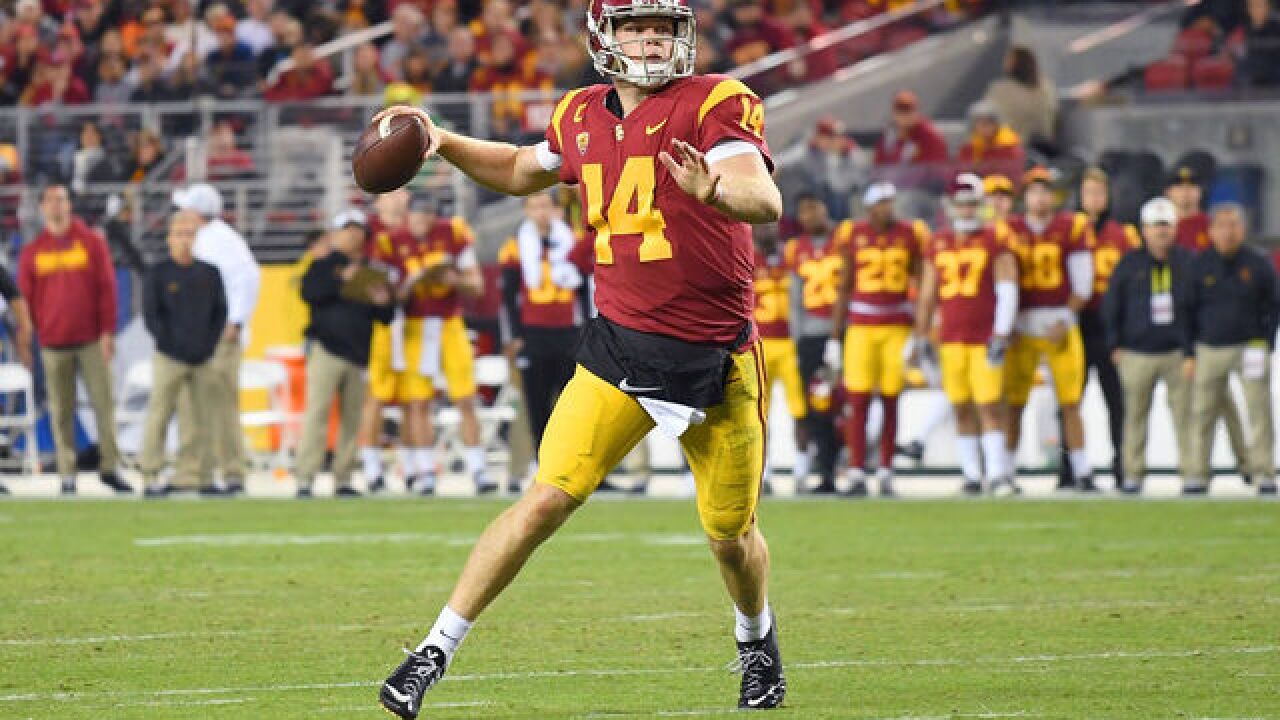 Copyright 2018 Scripps Media, Inc. All rights reserved. This material may not be published, broadcast, rewritten, or redistributed.
Thearon W. Henderson
<p>SANTA CLARA, CA - DECEMBER 01: Sam Darnold #14 of the USC Trojans looks to throw a pass against the Stanford Cardinal during the Pac-12 Football Championship Game at Levi's Stadium on December 1, 2017 in Santa Clara, California. (Photo by Thearon W. Henderson/Getty Images)</p>

The 2018 NFL Combine is all said and done, we're on the cusp of the start to free agency, which all can mean only one thing: it's time for the first mock draft of the offseason.

The Buffalo Bills are faced with a very interesting conundrum.

With the 21st and 22nd overall selections, the Bills have the ammo required to move up in the draft order to secure a potential franchise quarterback, while still keeping a normal draft.

However, they also have five picks in the first three rounds, which could help build their roster with the infusion of youth that they so desperately need.

Do they mortgage it all to try and get their guy?

Let's find out, with my first mock draft of the season:

- At the end of the day, I honestly cannot see the Cleveland Browns passing on a quarterback at first overall. There is too much at stake and they control their own destiny to secure the player that fits them the best at the most important position in football -- a position that they've neglected with a first-round pick for too long. Here is their opportunity, and it seems like Darnold is the guy right now.

- When the New York Giants hired Dave Gettleman to be their general manager, they're getting a bit of an old-school thinker -- who will probably draw off the Jacksonville Jaguars example of a talented roster, a quick rebuild, a good enough quarterback, and a running back that can get them over the edge. I don't think they should neglect the quarterback position, but Saquon Barkley might be too good to pass up in Gettleman's eyes.

[Related: How Saquon Barkley can be the Bills' best friend in the 2018 NFL Draft]

- This is a pretty easy pairing. The Colts desperately need pass rushing help, and Chubb is the best one in the draft. They could also be a trade-down target for a quarterback hungry team.

See the trade details, and the Bills' second selection on Page Two!

- And here it is... what you've all been waiting for. At this point in time, I think GM Brandon Beane will do what he can to make a move up the board that will help his team into the future, without completely mortgaging that same future. As far as quarterbacks in this draft go, the pairing of Josh Rosen with the Bills is as strong as you can find. Everything that Beane has discussed when talking about franchise quarterbacks is embodied in Rosen, considering that the quarterback is the smoothest and most natural pocket passer in the entire NFL Draft this year. His poise in the pocket and maneuverability throughout it while keeping his eyes down the field are reminiscent of a savvy veteran NFL quarterback. Rosen gets a bad reputation around the league for his opinions, but I don't think that will scare the Bills away one bit. They have an advanced scouting report on Rosen and what he's like by way of offensive tackle Conor McDermott, a teammate of Rosen's that absolutely loves the quarterback. If the Bills make a move up the board this high, Rosen seems like an ideal target for them. Now, for the trade specifics. The Bills would probably want to trade both 21 and 22 rather than dealing next year's first-round pick, but the Browns likely will assess the Bills as a team likely to regress next season, with a pick higher than 22. Plus, with all the selections that Cleveland has this season, they don't need another one and they get to add a potential top 15 pick in 2019. Not to mention, they have enough second-round picks to give them a third first-round pick in this draft, so they still have tons of flexibility. The Bills, likely knowing it will take next year's first-round pick to get their quarterback, will likely try to stack as many picks on Day Two and early Day Three as possible for any trade up scenarios, or to come away with prospects of note next year.  Plus, they keep 22 in this year's draft. In the end, if Rosen is the guy that they've been waiting for, the cost really won't matter. Here's the big swing, now the Bills have to knock it out of the park.

- This pick is operating under the assumption that the Broncos sign a free agent quarterback next week. I would not rule out the idea of them taking Mason Rudolph in the second round.

- On the outside looking in of the free agent derby, the Jets take a quarterback they hope to be able to build around. Josh Allen did everything right in Indianapolis, and it's looking more likely than not that he's a Top 10 pick.

- Perhaps not a total position of need for Tampa Bay, but he's a homegrown talent that can play any number of positions on the defensive side of the ball.

- Left on the outside looking in on the Patrick Mahomes pick last year, New Orleans moves up and gets the heir apparent to Drew Brees. Baker Mayfield isn't for everyone, but with a creative offensive mind like Sean Payton, the possibilities between this pairing are endless.

- In need of multiple linebackers, the Dolphins take advantage of Smith slipping outside of the Top 10.

- The same way that the New Orleans Saints did for Baker Mayfield, the Los Angeles Chargers do to land Philip Rivers' eventual replacement. If there is someone that has the mind to unlock the potential of Lamar Jackson in the NFL, it's Chargers head coach Anthony Lynn. Jackson gets the opportunity to learn from Rivers, and develop into a potential game changing player when he gets his chance after Rivers decides to call it a career.

- With an older pass rushing core, and after just releasing Charles Johnson, the need for a new pass rusher is there. Davenport is the exact body type they look for in defensive ends, and would slot in as an immediate starter.

- Still armed with another first-round pick, the Bills draft for a position that is absolutely critical to Sean McDermott's defense: middle linebacker. Leighton Vander Esch, besides having one of the best names in the draft, is the exact brand of player the Bills should be after to be their middle linebacker for the next 5-to-10 years. He's big (6-foot-4, 256-pounds), he's long (almost 34-inch arms), he's athletic (4.65 40-yard dash, 6.88 three-cone drill, 39.5-inch vertical jump), he's instinctive, he has coverage abilities, and he's an ascending player with tons of potential. How is he available at 22nd overall, you might ask? That's fairly simple. Linebacker is not a highly valued position to many teams out there -- but it is to a few, and the Bills are one of those few. Defensive tackle (Taven Bryan, Maurice Hurst) were considerations here, but the depth of that position in this draft make it more likely that a solid player that can step in and start will be around when the Bills are back on the board at 56.

(from NO) - WR Calvin Ridley, Alabama