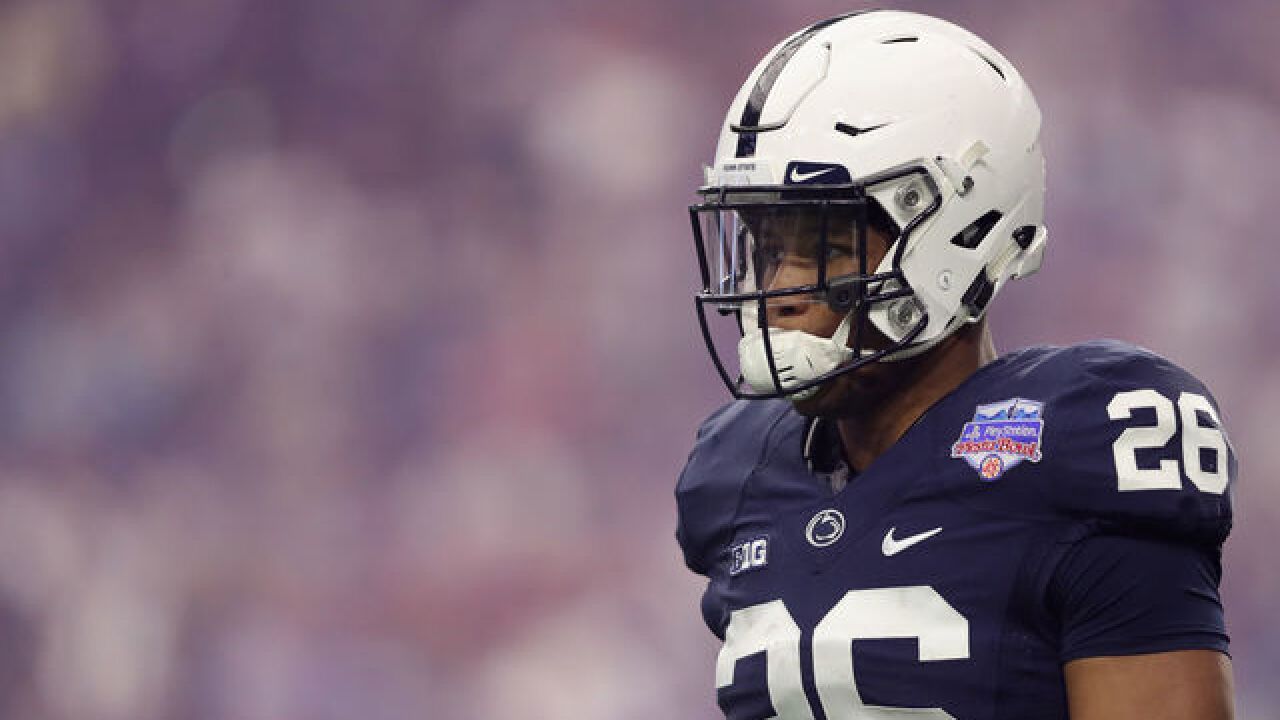 Copyright 2018 Scripps Media, Inc. All rights reserved. This material may not be published, broadcast, rewritten, or redistributed.
Christian Petersen
<p>GLENDALE, AZ - DECEMBER 30: Running back Saquon Barkley #26 of the Penn State Nittany Lions walks on the field during the first half of the Playstation Fiesta Bowl against the Washington Huskies at University of Phoenix Stadium on December 30, 2017 in Glendale, Arizona. (Photo by Christian Petersen/Getty Images)</p>

The 2018 NFL Scouting Combine is now in the rearview mirror, and the maneuvering of the National Football League with the 2018 NFL Draft has taken center stage. And throughout the week-long NFL Combine, a hero for the Buffalo Bills has emerged.

The Penn State running back was among the best players all throughout the last college football season, making it look effortless at times — where his natural ability is shown off in a jaw-dropping fashion. The actual season itself wasn’t just the last time that Barkley impressed everyone in a big way, either.

He did it again through the week in Indianapolis. He crushed his media interview, he was easily one of the most impressive players on the field during the workouts, and even more important, he made the hearts of teams flutter a bit.

Take this, from Peter King of The MMQB for instance:

“Penn State running back Saquon Barkley put some distance between himself and the field for the best player in the draft. “He’s the best running back prospect I’ve seen in 25 years,” Saints coach Sean Payton told me. Another team, which had given only four draft prospects perfect grades in the last 20 years, told me Barkley is the fifth.”

The more and more hype he gets, the more and more it starts to show that Barkley might not make it out of the top five of the NFL Draft, and is even a contender for the top overall pick.

So, then why all the Barkley love from a Bills perspective… especially when they already have LeSean McCoy on the roster and no top-five selection?

It’s all about the quarterback trickle-down effect.

There is quite a bit of buzz about Barkley being in play for the Cleveland Browns with the first overall pick — a team that has one of the unique positions in draft history. Not only do the Browns own the first overall pick, but they also have the fourth overall selection in a bit of a quarterback-heavy draft market.

So that means, if you’re a fan of the Bills, you should be rooting with every bone in your body for the Browns to actually select Barkley with the first overall pick, and here’s why:

There is little doubt that the Bills are in on the quarterback market by way of the draft. Both of the main decision-makers in Orchard Park, general manager Brandon Beane and head coach Sean McDermott, didn’t shy away from the conversation one bit. That’s quite notable with McDermott especially, because there were many times throughout the season when he was asked about a specific player or a specific position, and he would turn it into a broader stroke during his answer.

And to get the player that they so desire, whether it be USC’s Sam Darnold, UCLA’s Josh Rosen, Wyoming’s Josh Allen, Oklahoma’s Baker Mayfield, or Louisville’s Lamar Jackson, the likeliest outcome is that they’re going to need to trade up — likely by varying degrees based on the quarterback that they might wind up coveting.

[Related: Joe B ranks the Top 5 quarterbacks with how they would fit the Buffalo Bills]

Like the Browns, though, the Bills are in quite the unique position. They’ve got two first-round draft picks — back-to-back, no less —along with two second-round draft picks, and some rostered players that might just be coveted by opposing teams for a trade (see: Cordy Glenn and Shaq Lawson).

The Bills could, conceivably, get into the Top Five, and keep the semblance of a normal draft — meaning, one first, one second, one third, one fourth, and two fifth-round picks. And it’s quite likely, that the Bills likely get a late round pick or two chucked on to the back-end of any possible trade to do so.

The one thing that they’d likely have to make peace with, in order to move all the way up from 21 to where they’d need to go, is to trade their first-round pick in 2019. However, if you get the quarterback you covet, it’s all worth it.

And while yes, Beane and McDermott would be sticking their neck out by making that big move up, and if it doesn’t work out that likely seals their fate — the same would be said for them taking a quarterback really anywhere in the first round, so they might as well take advantage of all the draft capital they have racked up and then get their pie in the sky quarterback. That is if they believe in one enough, but I tend to believe they’ll find one this year that meshes perfectly with their system and character beliefs.

So let’s bring it back to their draft BFF Saquon Barkley. The Browns should be firmly in the quarterback market, after neglecting the position in the first round for the past several years. The Browns might be thinking to themselves to take Barkley, and pair him with a quarterback with the fourth overall pick.

Now, I don’t think that would be the wisest of moves, given the overall importance of the quarterback position and the heavier wear-and-tear on the running back position. However, the Bills have to be hoping beyond all hope that it happens.

If it does, that puts Indianapolis at third overall into play as a potential trade partner to land one of the top two quarterbacks in this draft. In my opinion, that group consists of Darnold and Rosen. The Colts, on paper, already have their quarterback in Andrew Luck, and might just be compelled to move down and to add multiple prospects and a first-round pick next year.

And hey, there’s always the chance to benefit with picks, but a small added benefit would be to also stick it to the New England Patriots by directly helping one of their AFC East rivals by landing a bonafide quarterback prospect. Lest we forget, the mic drop moment from Colts GM Chris Ballard after the Josh McDaniels decision, when he declared, “The rivalry is back on.”

However, the Bills and Giants have a bit of a rapport worth noting, too. The Giants own the second overall pick and certainly need a quarterback of the future, but it seems they don’t want to end the Eli Manning era just yet.

When you combine that, with their GM being Dave Gettleman — a man that Brandon Beane worked with closely in Carolina over the span of four seasons and five NFL Drafts. Beane likely knows what Gettleman values from a trade perspective, and that gives him a leg up if he were to deal with the Giants to try and make the big move up to number-two.

However, you’d have to envision the Colts as the more likely to want to move down from their lofty draft spot — at least at this point in time.

But all of this flexibility would not be possible if the Browns took a quarterback, which would potentially leave the Bills without a dance partner and on the outside looking in on those top two possible franchise-defining quarterbacks.

So if you’re a Bills fan in support of them moving up to take that quarterback, you want one of two things to happen. Either the Browns land Kirk Cousins in free agency, which would take them out of the quarterback market completely or the seemingly likelier option at this point — for the Browns to fall in love with the idea of taking Saquon Barkley and still getting a quarterback on the back-end at fourth overall.

And if the Browns take the Barkley bait, that could mean the Bills are one step closer to finally solving the riddle that has plagued them since the late 1990s. It is essential that they take advantage of any slight edge in as critical a game as is the NFL Draft.

The longer that chatter continues, the wider your grin as a Bills fan should be getting.

So maybe, just maybe, Saquon Barkley could be the key to the Buffalo Bills getting their franchise quarterback to build around. The draft certainly works in mysterious ways.