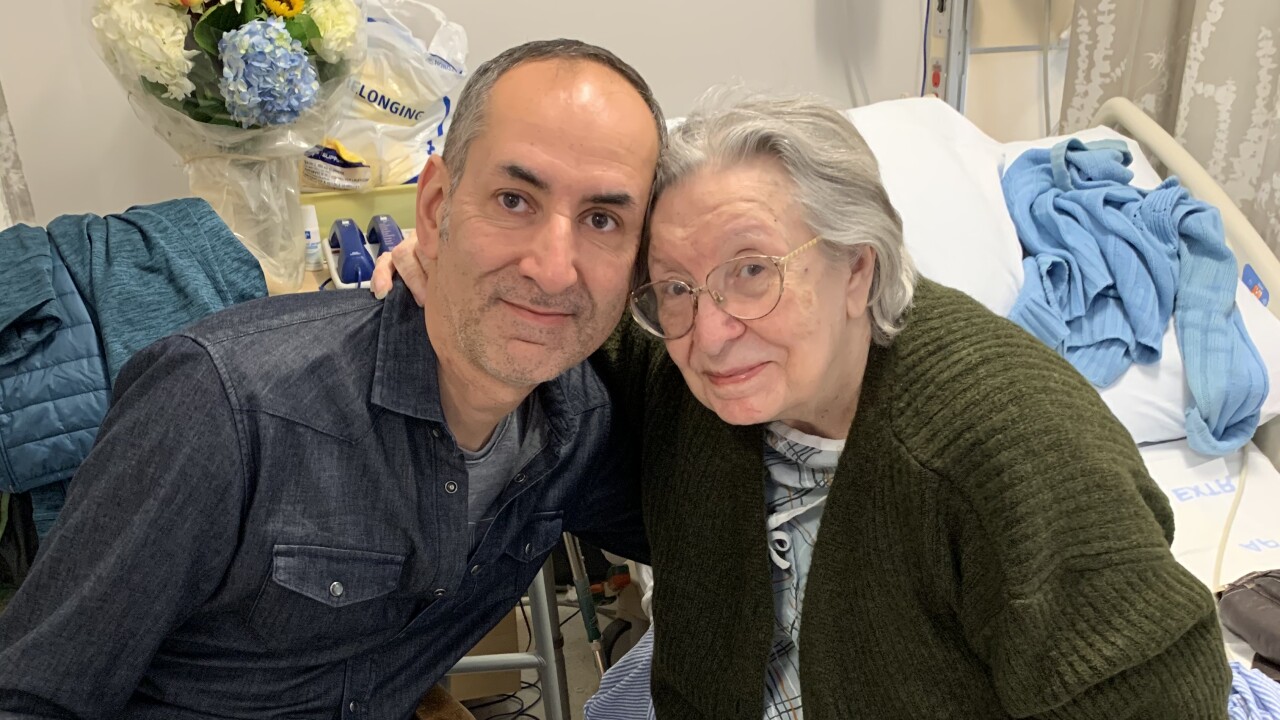 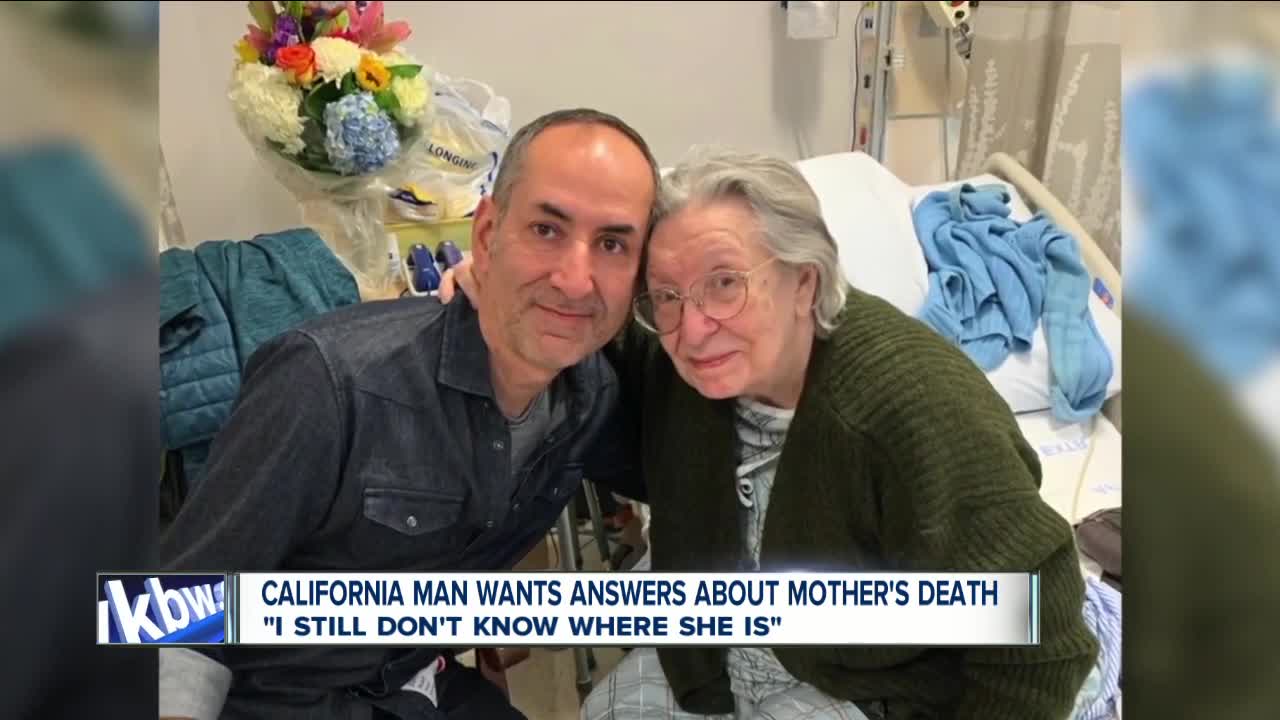 BUFFALO, NY (WKBW) — Imagine calling a nursing home to speak with your mother only to be told she died more than a week ago.

That's what happened to a California man who is now searching for answers surrounding his mother's passing.

“Toederina! You must have know her. She says oh that lady, she past away over a week ago she says, but right now, nobody can help you", explained Constaintin Stanescu, California resident.

Stanescu tells 7 Eyewitness News that was the conversation he had this week with a nurse at the Buffalo Center for Rehabilitation and Nursing on Delaware Avenue and West Utica in the city.

His mother, a Romanian immigrant, was sent to the Buffalo facility last November after she was hospitalized in New York City. Stanescu said it was the only place that accepted her after she was rejected to about 100 other facilities.

But with the COVID outbreak, no one is allowed to visit nursing homes, Stanescu would call to check on his mother.

In a statement to 7 Eyewitness News, the nursing home said quote "the clinical staff at Buffalo Center followed protocol as they tried several times, leaving voicemails" to contact the woman's son since the end of February and could not reach him by phone.

It also states Stanescu admitted in an email, dated Thursday, that he did receive a voice mail message from March 27th of his mother's regression.

Stanescu provided us with a copy of those emails exchanges dated April 16th:

"Ann Marie,
I’ve received a call from Mia in March 26th and I spoke to her immediately. She stated my mother was not eating and if she doesn’t she would be tube fed. I spoke to my mom that day and begged her to eat so she can avoid the tube feeding and she said that she will eat for me. I appreciate you offering her sandwiches and other asking the types of food she’s use to eating and enjoys.
Nonetheless, this had nothing to do with her passing!"
Constantin

On Apr 16, 2020, at 10:36 AM, Mia Tyler wrote:
"We have documentation of all events and no cover up is necessary ,your mother was well taken care of at this facility and all family members are updated on their loved ones .the emails always worked and just as I’m responding to you now your email would have been answered if i received an email from you. so going forward whatever documents or information you need can go to medical records and any further communication can be directed to administration. Thank you"

We spoke with the Center for Elder Law and Justice. They've reported the situation to the New York State Department of Health, who will follow up and take action if necessary.

“Those actions may include sanctions and other steps the state could take to ensure that appropriate procedures are being followed and appropriate folks would be contacted, for example in a situation such as this when someone passes away,” explained Kelly Barrett Sarama, supervising attorney, Center for Elder Law and Justice.

The nurse facility says it is "deeply saddened" by the loss" and are available to speak with the family.

But for now, Stanescu says he has no cause of death and for now. He said he has no idea if she died of COVID.

“She was a great candidate for COVID-19. She had lung problems and she was on oxygen,” Stanescu said.

The Center for Elder Law and Justice said it has been working to be a watchdog during the pandemic.

“We have been calling on New York State to release more information about what is going on inside of these places,” Sarama remarked.

But due to state privacy laws, the cause of Stanescu death could not be released by the facility.

"Holding nursing homes accountable for the quality of care they provide is a top priority of the New York State Department of Health. New Yorkers who have a complaint or concern about a nursing home should contact the Centralized Complaint Intake directly at 1-888-201-4563, so appropriate action can be taken. At the conclusion of every investigation, the outcome is shared with the complainant. All complaints are reviewed and kept confidential. In addition, to ensure those who are most impacted have the information they need, Governor Cuomo issued Executive Order No. 202.18 [governor.ny.gov] that requires notice to family members and next of kin within 24 hours if any resident tests positive for COVID-19 or suffers a COVID-19 related death.”

“The staff at both Buffalo Center and Ellicott Center have been in proper PPE gear since early March as per the guidelines of the Department of Health and Centers for Disease Control and Prevention (CDC). Our facilities have been working together with those state agencies, which includes the DOH and the CDC with any updates, in relation to COVID-19. Like always, the care for our residents and staff are first and foremost our number one priority, especially during these times," wrote Jeffrey Jacomowitz, director of corporate communications.

For now, Stanescu is grieving for a woman he says was a humble, who worked as a housekeeper.

“This was a woman that was friends with Madame Curie daughter. She was a housekeeper. She was friends with and worked for Rex Harrison, the actor,” Stanescu reflected. “There's always more to just a number that we see on t.v. There's a story behind every number."

Full statement issued by Buffalo Center for Rehabilitation and Nursing:

“The clinical staff at Buffalo Center followed protocol as they tried several times, leaving voicemails, as they tried contacting her son, Constantin Stanescu, since the end of February 2020, giving him updates on the status of his mother, Teodorina. At the beginning of her stay, Mr. Stanescu had given one phone to be contacted, but turned out to be unreachable by phone. The Unit Manager where his mother was being cared for, started emailing him at his Gmail address, since she could not verbally reach him. Due to HIPAA laws, Buffalo Center cannot give out personal treatment, but these “update emails” about the mother’s status and treatment to the son were sent to the son on Feb 27, 2020, March 3, 2020 and March 27, 2020, when at that point, his mother’s healthhad started to decline.

On April 16, ten days after his mother’s passing, Constantin emailed clinical staff personnel admitting that he did receive the March 27 voicemail, knew of his mother’s regression, saying that he begged his mother to eat so to try to avoid tube feeding. In that April 16 email, he thanked the staff at Buffalo Center for offering sandwiches and other foods that she would enjoy.

The staff is deeply saddened by the loss of Teodorina Stanescu and we are available to discuss anything with her family members. Buffalo Center knows and understands how difficult it is to lose a loved one in the family. The facility offers an Open Door policy and always welcomes families to voice any concerns, either in-person (during non-COVID-19 times) or anytime by phone.”