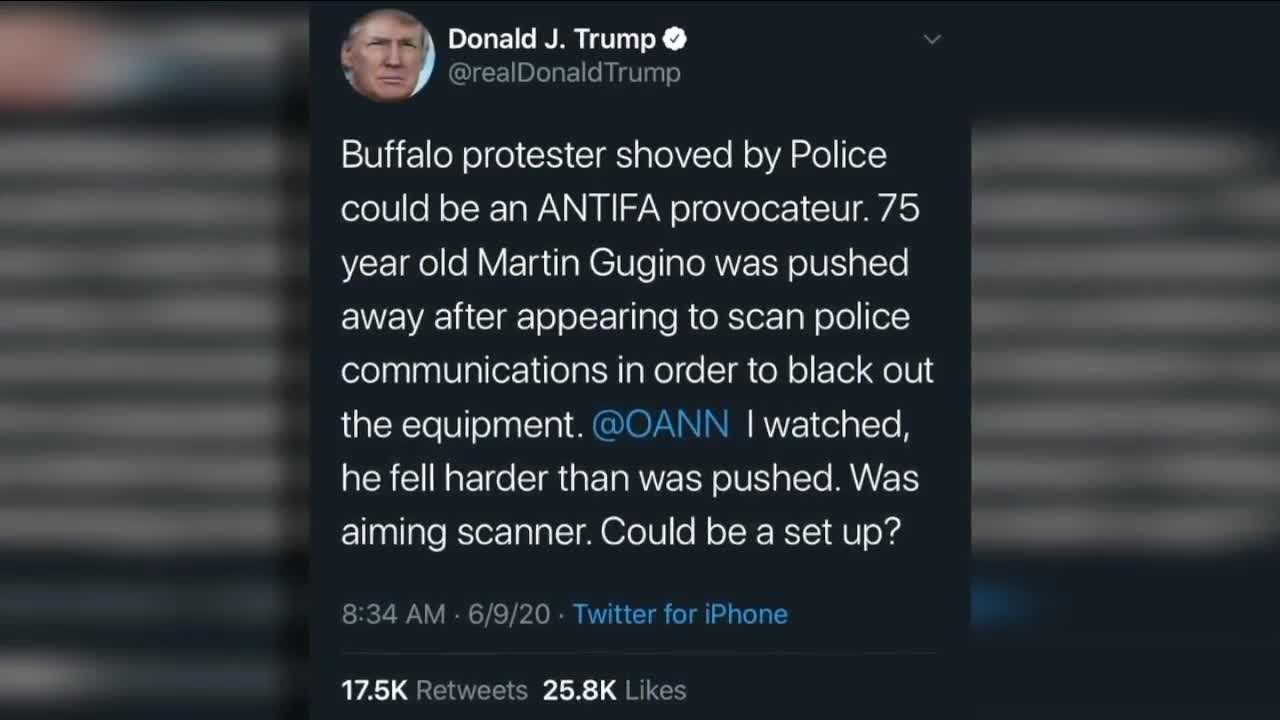 Gov. Cuomo called on President Trump to apologize for his tweet about Martin Gugino. 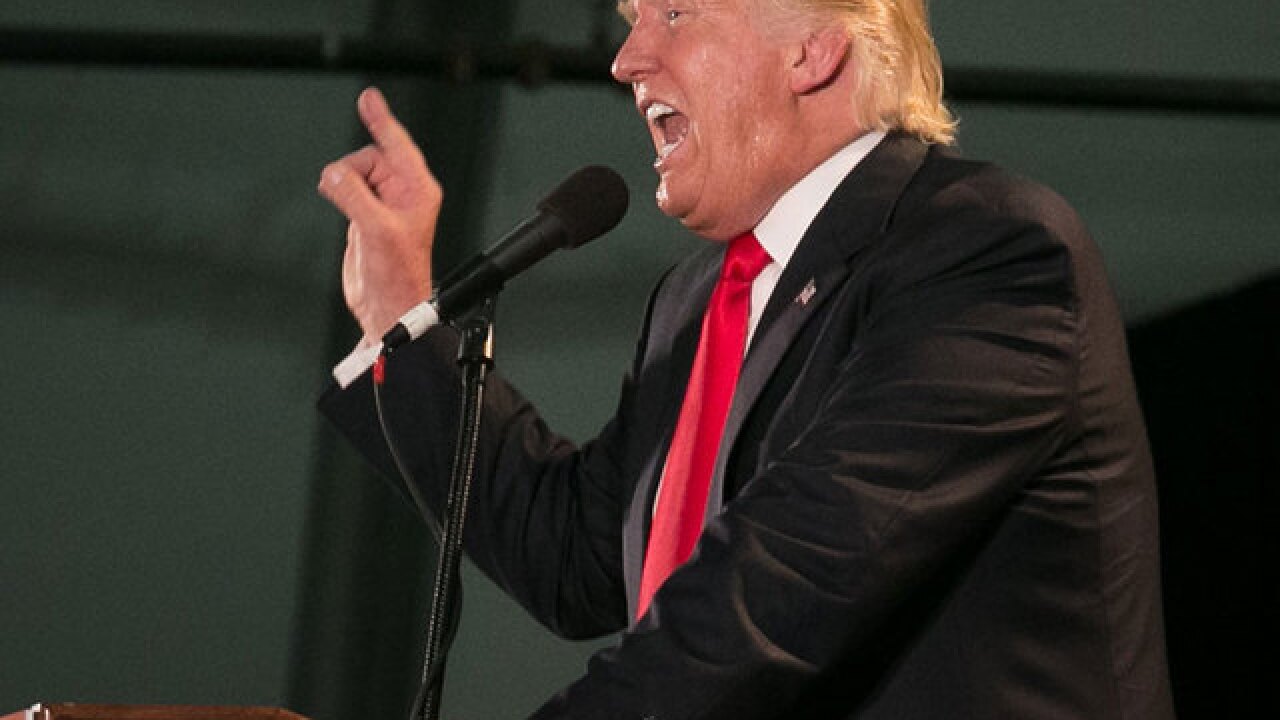 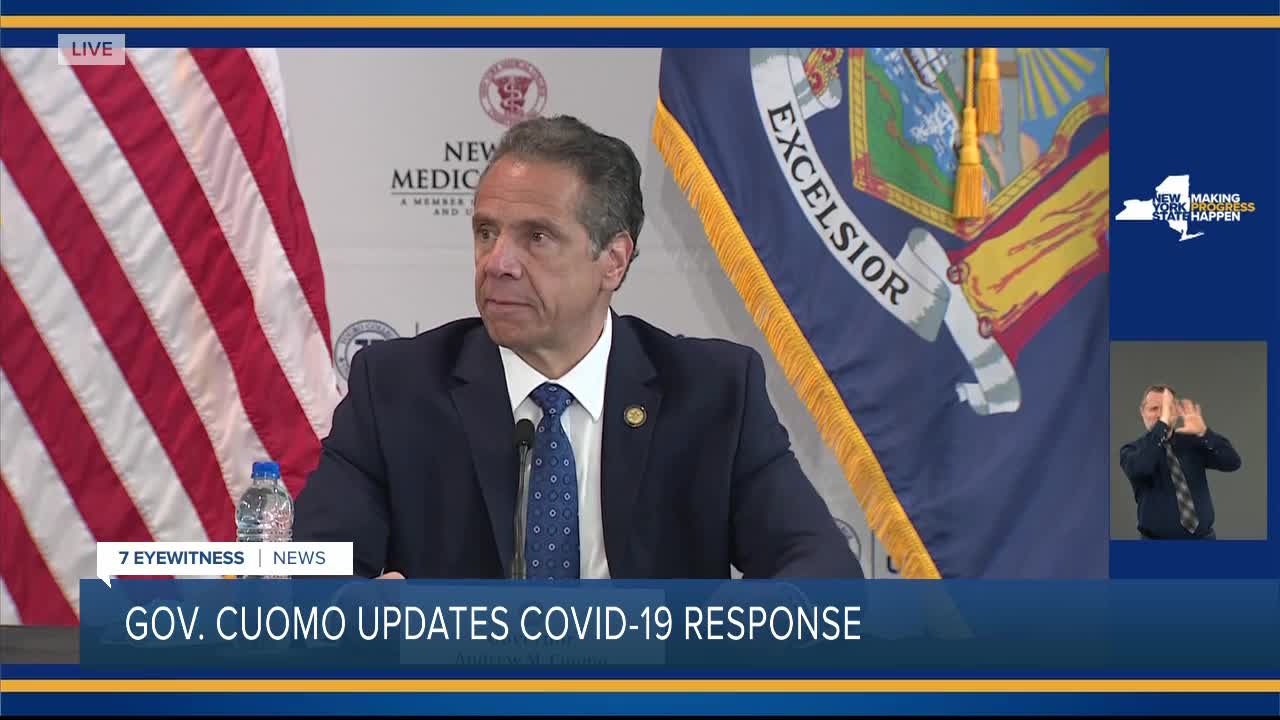 In the tweet, the President claims Gugino "was pushed away after appearing to scan police communications in order to black out the equipment." He offered no evidence to support his claim.

Buffalo protester shoved by Police could be an ANTIFA provocateur. 75 year old Martin Gugino was pushed away after appearing to scan police communications in order to black out the equipment. @OANN I watched, he fell harder than was pushed. Was aiming scanner. Could be a set up?

Gugino, 75, who was shoved by Buffalo police while protesting outside City Hall last week, remains in serious but stable condition at Erie County Medical Center. Gugino was part of a group protesting past the 8pm curfew, against police brutality in the wake of George Floyd's death.

I just spoke w/Martin Gugino's attorney. She told me, "There is no need to go around name calling, accusing people of being things they're not. Everything will work itself out."

She said, "Martin has always been a peaceful protester, I don't know where that comes from." @WKBW https://t.co/kel9uo1CrC

Mr. Gugino's attorney, Kelly V. Zarcone, Esq. of Lipman and Zarcone, PLLC responded to the tweet Tuesday morning saying, "there is no need to go around name calling, accusing people of being things they're not. everything will work itself out." She added, "Martin has always been a peaceful protester, I don't know where that comes from."

Zarcone also spoke to CNN Tuesday morning and said she’s “at a loss to understand” President Trump’s questioning of whether the entire incident was a “set up.”

“No one from law enforcement has even suggested anything otherwise so we are at a loss to understand why the President of the United States would make such dark, dangerous, and untrue accusations against him,” Zarcone said. "Martin has always been a PEACEFUL protester because he cares about today’s society."

The two officers involved are currently suspended without pay and facing assault charges.

When contacted about the tweet Tuesday morning, Buffalo Police Captain Jeff Rinaldo said, "I have no comment right now."

Buffalo Mayor Byron Brown issued the following statement in regards to the President's tweet, "The City of Buffalo is focused on healing after several days and nights of calm and constructive meetings and protests about how we take action to achieve racial equity and a good future for our residents and community. We will not be distracted from this urgent work. Our focus on positive change is stronger than ever. My administration remains hopeful that Mr. Gugino will experience a full recovery. And that the officers involved in this incident receive due process under law."

Mr. President @realDonaldTrump, the City of Buffalo is laser focused on healing, taking action against racial injustice and building a good future for our residents. We pray for a full recovery for Mr. Gugino and as I have repeatedly said, the two officers deserve due process. https://t.co/BNvp15eRWL

In his daily news briefing, Governor Andrew Cuomo blasted the President for his comments.

"How reckless, how irresponsible, how mean, how crude," Cuomo said. "I mean if there was ever a reprehensible dumb comment, and from the President of the United States. At this moment of anguish and anger, what does he do? Pours gasoline on the fire. If there was ever, if he ever feels a moment of decency, he should apologize for that tweet. Because it is wholly unacceptable. Not a piece of proof, totally personally disparaging, and in a moment when the man is still in the hospital. Show some decency. Show some humanity. Show some fairness. You're the President of the United States."