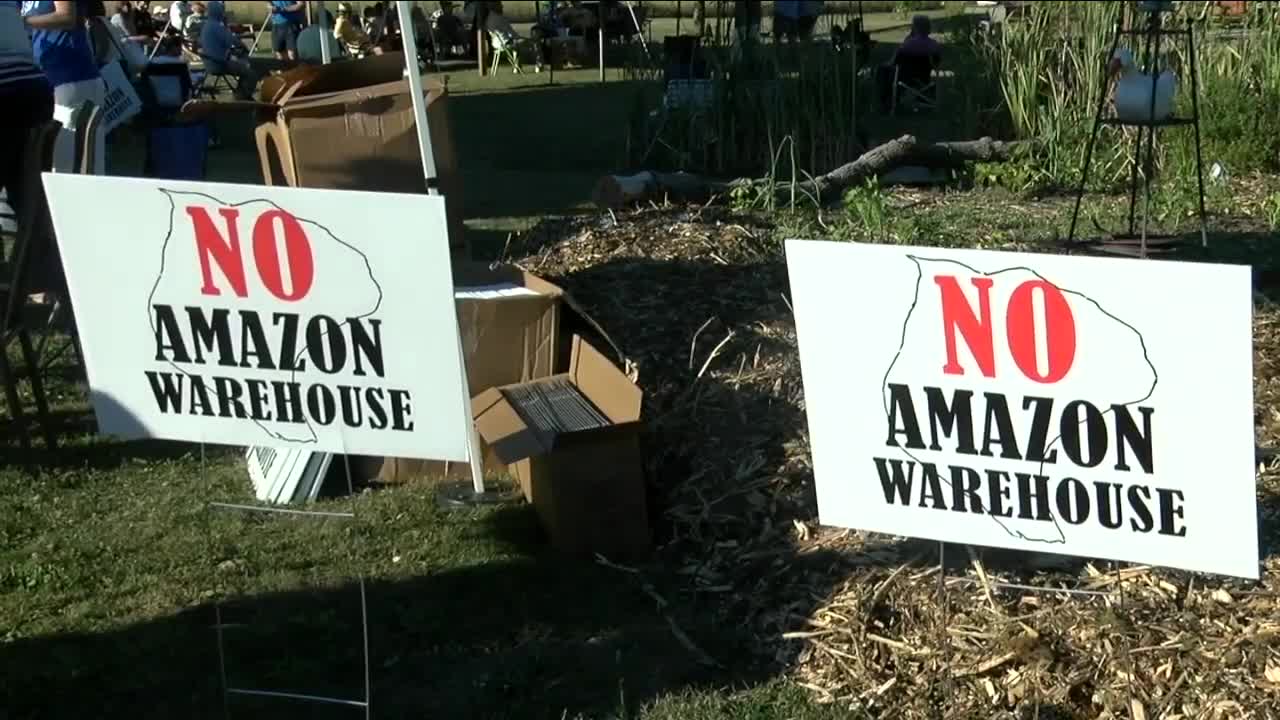 GRAND ISLAND, N.Y. (WKBW) — About 100 people gathered on Grand Island Friday evening to oppose a plan to build an Amazon facility on Long Road, off I-190.

From traffic concerns to environmental concerns, the Coalition for Responsible Economic Development for Grand Island (CRED4GI) has a petition asking the Grand Island Town Board to oppose the project. The group, which formed in July, said 1,300 people have signed the petition.

“We don’t believe that a massive, one of the world’s largest warehouses, being built on this island is a good idea," said Cathy Rayhill, the group's spokesperson. "We don’t think that’s responsible, it does not fit the character of the island that we have either environmentally or from a residential perspective."

In a statement to 7 Eyewitness News, the Grand Island Conservation Advisory Board agrees with some of the group's concerns.

"The Grand Island Conservation Advisory Board is very concerned about the environmental impact of such a large construction project and the ongoing effects of the increased traffic, light and noise to the surrounding area. Grand Island is a unique and important ecosystem in the Great Lakes watershed. To date, Amazon and the developer have been the only source of environmental information. We are asking the Town Board to exercise “due diligence” and independently assess the environmental impacts of this project."

Some at the meeting said the former Bethlehem Steel site in Lackawanna would make more sense. At a press conference last week, Erie County Executive Mark Polencarz said he preferred that option too, he said the project is too big to turn away.

“If we turn our back on this project, it’s basically sending a message to a lot of these other mega projects that do exist out here, don’t come to Erie County, don’t come to WNY, and I don’t think that’s a message we can send especially at a time when thousands of people have lost their jobs," he said.

"Project Olive" would bring 1,000 jobs. Poloncarz said 85% of construction workers must come from Erie County. In all, the facility would cover 3.8 million sq. feet.

The money did not change the stance of many at the meeting. Lifelong Grand Island resident Sandra Nelson showed up to the meeting with a sign reading "not for sale," "you can't buy us," and "not enough money in the world."

“We are not against businesses coming and opening on Grand Island," Nelson said. "This is a mammoth, mammoth warehouse, that does not belong on an island.”

The Town Board is holding a special meeting on August 13th at 7 p.m. to discuss the project. Residents can attend in person or via Zoom.