Movement to Restore Trust calls on Bishop Malone to resign 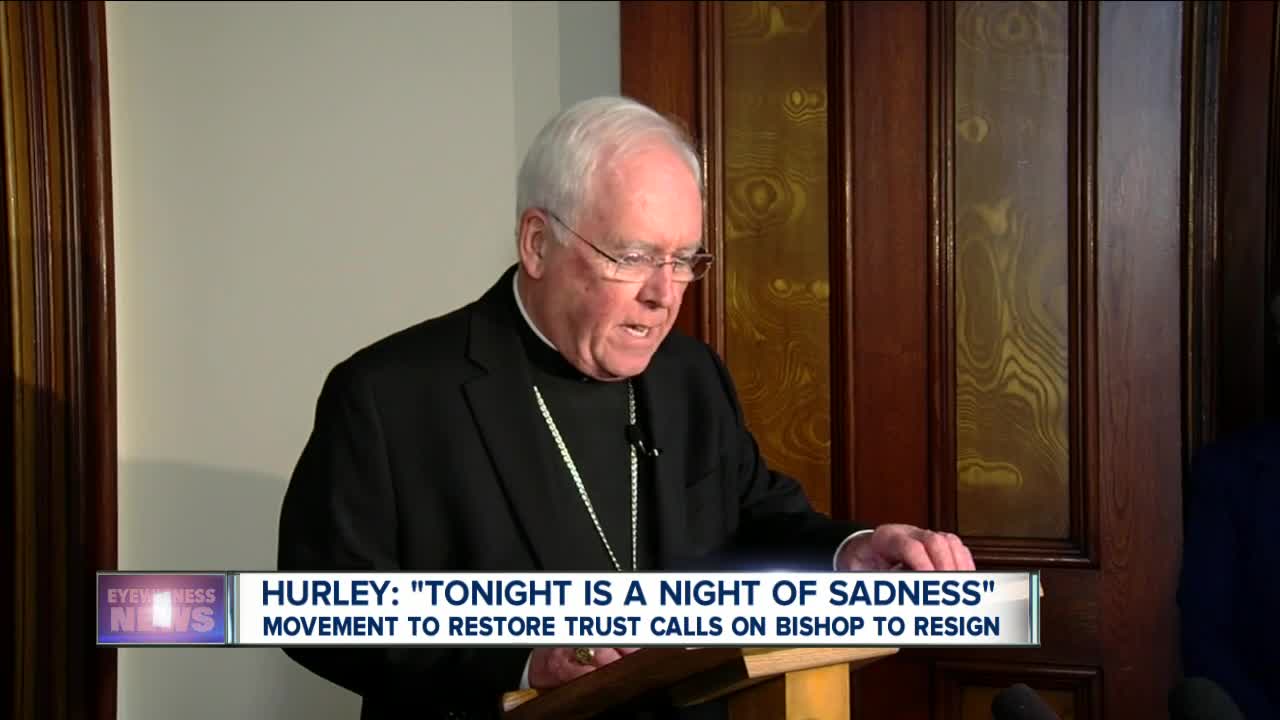 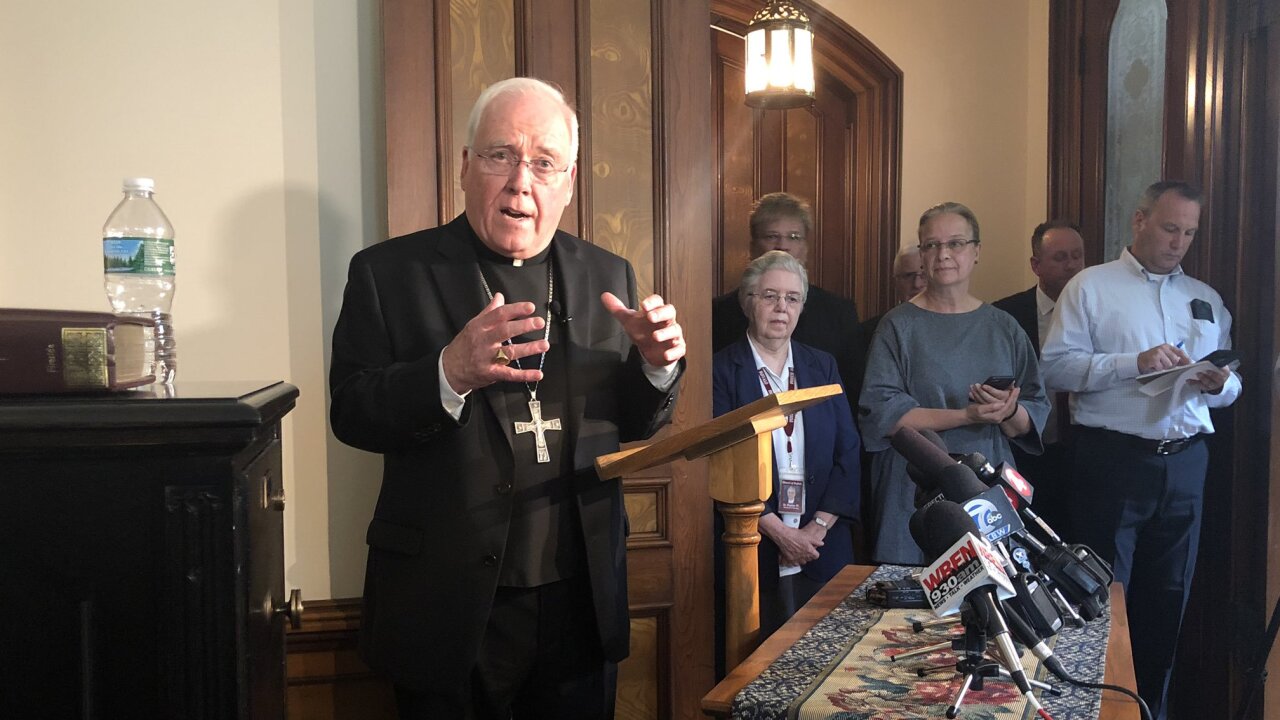 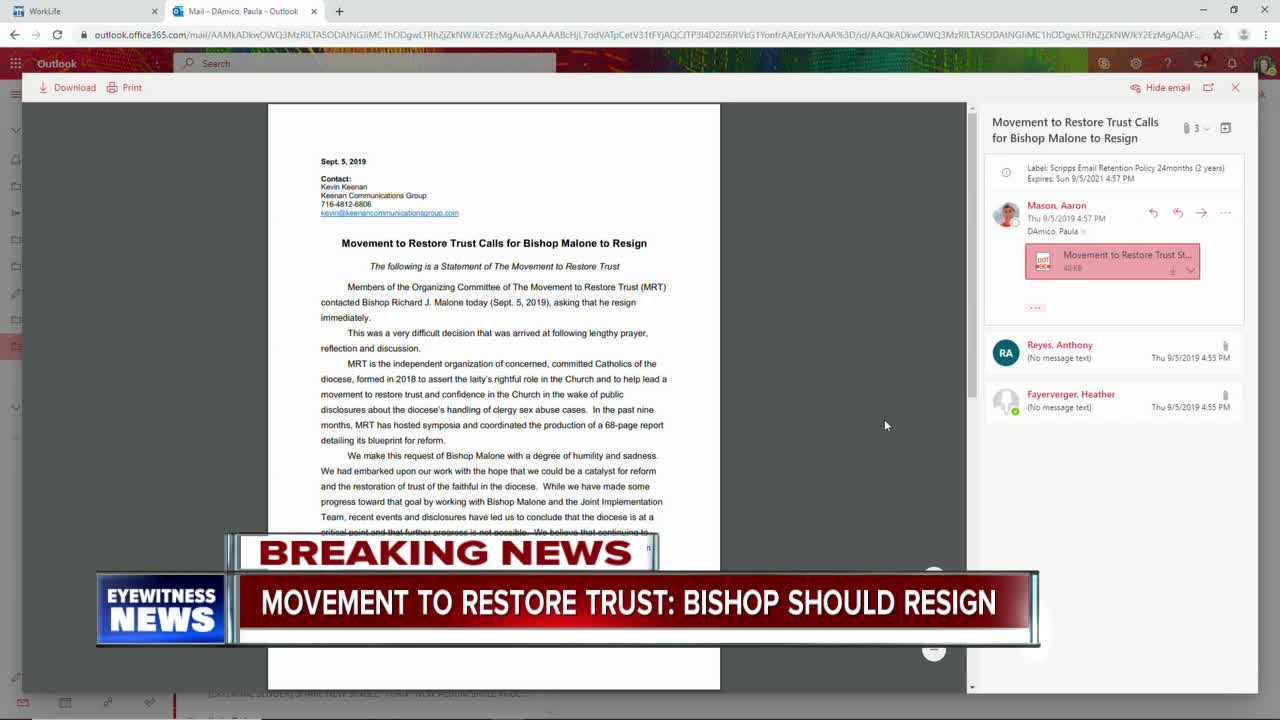 BUFFALO, N.Y. (WKBW) — The Movement to Restore Trust (MRT), a group of powerful and influential Catholics formed in 2018 to assert the laity’s rightful role in the Church, contacted Bishop Malone Thursday asking that he resign immediately.

We make this request of Bishop Malone with a degree of humility and sadness. We had embarked upon our work with the hope that we could be a catalyst for reform and the restoration of trust of the faithful in the diocese. While we have made some progress toward that goal by working with Bishop Malone and the Joint Implementation Team, recent events and disclosures have led us to conclude that the diocese is at a critical point and that further progress is not possible. We believe that continuing to press forward under these circumstances jeopardizes MRT’s comprehensive reform agenda and compromises our ability to be agents for positive change.

The move is striking and potentially devastating for Bishop Malone's future in Buffalo, as the MRT and Canisius College President John Hurley were seen as key allies in Malone's efforts to remain in Buffalo. The bishop, in fact, cited the group multiple times in his news conference Wednesday where he said he would not resign.

The MRT points out the sex abuse scandal in the diocese dates back several decades before Malone arrived, but state "he has not handled current cases properly and as a result, there is a substantial risk of harm to the diocese and the good works that the Church does in this region."

The reform group put forth a series of reform proposals and, working hand-in-hand with the diocese, hosted "listening sessions" with Malone on the sexual abuse crisis.

At times, the group was criticized for its apparent support of Bishop Malone and the close ties between the bishop and Catholics on the organizing committee -- which is one reason why the MRT's reversal looms as so significant a factor in Malone's future.

The MRT says the Vatican should appoint a temporary diocesan administrator that has no ties to the Diocese of Buffalo while considering the appointment of a permanent Bishop of Buffalo.

Our goal remains justice and healing for the victims of sex abuse and the restoration of trust in Christ’s Church. In order for our Church to move forward, and for the good of the diocese, the time has come for new leadership - leadership committed to openness, transparency, and co-responsibility with the laity.

7 Eyewitness News reached out to the diocese for a statement in response to the MRT's call for Malone's resignation. The spokesperson for the diocese responded saying, "Bishop Richard Malone received word from the MRT organizing group earlier in the day. Due to his full schedule today, which included Mass and a gathering with members of the Bishop’s Council of the Laity, we are unable to issue a statement this evening, but will soon."

On Friday, the spokesperson for the diocese issued this statement:

Bishop Malone was disappointed to receive the news from John Hurley that the Movement to Restore Trust (MRT) Organizing Committee has decided to cease their collaboration with the Diocese and also to call for his immediate resignation.

The MRT began their work with a faith-filled and passionate concern for the Church throughout Western New York. While the Church has faced deep challenges, the dialogue and discussion of the Joint Implementation Team (JIT) helped the diocese make significant progress over the past several months, including holding seven Listening Sessions across Western New York. Bishop Malone was looking forward to continuing to cooperate with the MRT and regrets that the work will now have to be done without their assistance.

Nevertheless, Bishop Malone will continue to work with the established consultative bodies in the diocese such as the Diocesan Pastoral Council, Bishop’s Council for the Laity, Presbyteral Council, and other priest and lay leaders to accomplish the goals of assisting the healing of victim survivors of sexual abuse, enhancing lay involvement in the Church, and strengthening the trust and faith of the people of this diocese.