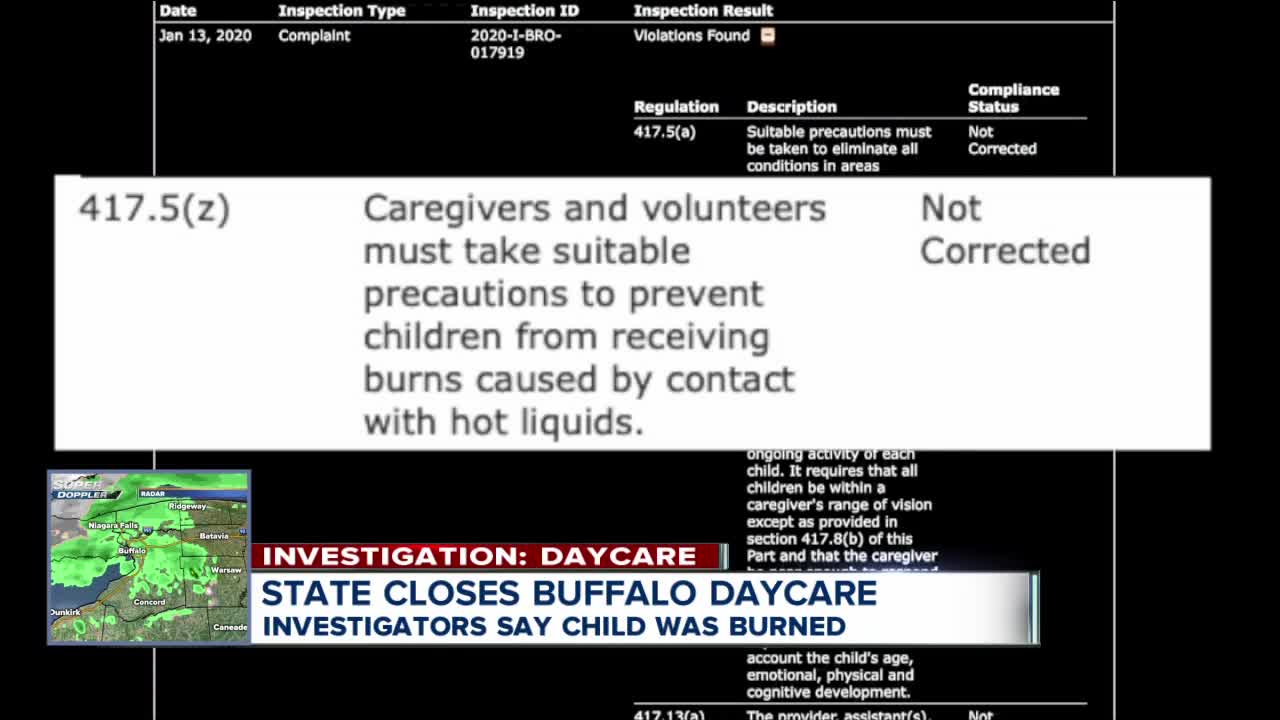 The 7 Eyewitness News I-Team has learned a Buffalo daycare is no longer operating because of a serious violation of state regulations. The provider's license was suspended

BUFFALO, N.Y. (WKBW) — The 7 Eyewitness News I-Team has learned a Buffalo daycare is no longer operating because of a serious violation of state regulations. The provider's license was suspended.

Last month, the I-Team went looking for Tara Funderburg. She's the on-site provider at Moore and More Kids Family Day Care, on Carl Street, on the city's east side. We had some questions about what happened inside her daycare. A man on the porch told us, Funderburg was not home.

Funderburg had her registration suspended in January. Her daycare was effectively shutdown, after state investigators say a child was burned by hot liquids, while in her care. That was January 13.

Days later, on January 17, "the state Office of Child and Family Services immediately suspended and moved to revoke the license of Moore & More Kids Family Day Care...following a serious incident where the provider's failure to adequately supervise a child resulted in an injury."

The state cited Funderburg for failing to take "suitable precautions to prevent children from receiving burns caused by contact with hot liquids."

The Office of Child and Family Services suspends a provider's license when, "there is evidence that the public health or a child’s safety or welfare is in imminent danger. A program which has been suspended must immediately stop operating."

It does not appear 911 was ever called for help the day the state says that child was hurt. AMR ambulance dispatchers say they were not called to this home.

The 7 Eyewitness News I-Team also filed a public records request with the Buffalo Police Department, looking for any and all police reports related to Funderburg's Carl Street property. We discovered police were called there only once between December 1, 2019 and January 28, 2020. The one time police were called was the morning the I-Team went looking for answers.

Funderburg turned down a number of requests for an interview. Instead, by phone, Funderburg told the I-Team, "no one was burned."

She's filed to have a hearing with an administrative law judge. Details about that hearing are not being made public.

The state says OCFS "cannot comment further because Moore & More Kids is part of a legal proceeding, and the provider has due process rights."

There has been a number of emails exchanged between the I-Team and the Office of Child and Family Services about this daycare.

In pressing for more information, the I-team wanted to know more about the regulation this daycare violated.

The I-Team responded to what appeared to be an accidental reply all.

The I-Team has also filed a public records request with New York State for any incident reports, written about the child who was hurt. We're looking to find out how it happened and learn more about the child's condition. The state has not yet fulfilled our request.